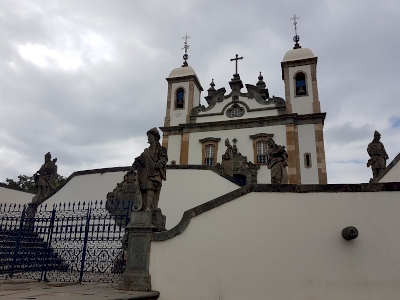 Site visited in November 2020. Unlike other reviewers, we had a car, so getting there and away was not a problem at all. This is preferable means of transport if you want to enjoy the marvels of Minas Gerais (probably the most interesting in Brazil) without spending too many days there. There are many beautiful colonial towns in short distance, such as Tiradentes, Mariana, Sabara or Ouro Preto. There are also many natural parks nearby, such as Serra do Cipo or Serra do Gandarela. Congonhas itself is not that interesting, but has a decent hotel base.

The sanctuary towers over the city so even without GPS it is very easy to find. As almost everywhere in Brazil, parking is not a problem – free spots are just behind the church, near convent buildings.

Because of the pandemic, the church, like most of other Brazilian churches, is open only for masses, so we were not able to get in. More painful was that the famous sculptures of prophets are inside the closed church area, so we were only able to have a close look from behind the gate.

Fortunately, all the chapels with the scenes of the passion of Christ situated on the hill were open and our visit was satisfactory.

According to the legend, the sculptures of the prophets and several figures in the chapels were made by Aleijadinho, a genius sculptor who, suffering from a serious illness, reportedly had no fingers or toes during the work. However, none of the previous reviewers noticed that there have been recent debates as to whether Aleijadinho even existed, let alone whether he was actually affected by the disabilities in question. Indeed, it seems almost impossible to carve such masterpieces with broken hands, and I personally feel that this is part of the legend. But even without this story, Congonhas is is an interesting site, worth visiting not only by WHS lovers. 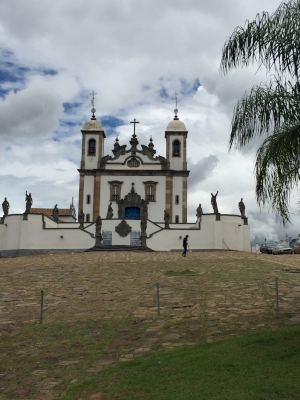 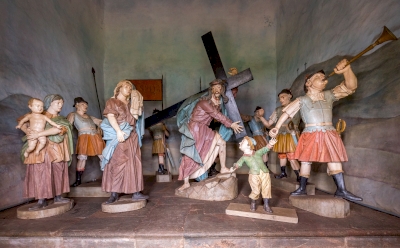 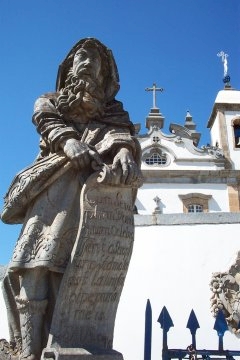 This review could be titled "Getting there and away". Getting there was much easier than I thought beforehand: there's one direct daily bus at 7 am from Ouro Preto. Getting away proved much more difficult: taxis and buses are very scarce in the surroundings of the Basilica to take you away. As are buses back to Ouro Preto - I eventually got there again after a 3 hour's wait in the village of Ouro Branco.

The church and the chapels are extremely picturesque. Set on a steep hill, towering above the humble buildings in the neighbourhood. A clear blue sky as its background. The statues of the prophets are unique pieces, each with its own pose and character. It's good to just sit here and awe.