Hatra is a ruined city that can be considered as the symbol of Parthian power which for a long time threatened that of Rome.

As centre of the empire, it flourished during the 1st and 2nd centuries BC. It was a fortified city of circular design.

Hatra is located in the Al-Jazirah region of present-day northern Iraq, 180 miles (290 km) northwest of Baghdad. 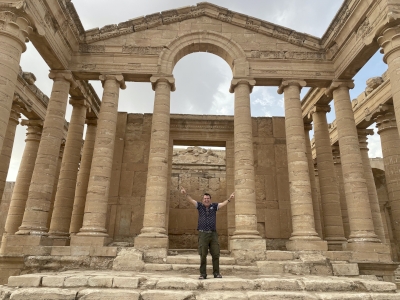 We visited Hatra in November 2021, and we were not sure up to the last minute if we were allowed in. There was no pre-arranged permit, and we just drove to the main gate, northwest of Telol al baj where the military commander is holding office. Our guide had the necessary connections in Baghdad, but this is the Middle East and you never know. The waiting time was spent with shisha and tea, almost 3 hours, and our passports were scanned and sent to the capital. Suddenly the tension was gone, all smiles in the faces, and we were given the permits. The check-points further on the road were also informed, and we could enter the premises of the archaeological site of Hatra. What a relief!  The city was known as "Beit Elaha" (House of God) and became an important religious centre in the Parthian Empire that flourished between the 1st and 3rd Centuries AD. The Roman emperors Trajan and Septimius Severus were not successful to conquer the city. However, about 240 AD Hatra fell to  Shapur I, the ruler of the Persian dynasty, and was destroyed for the first time. Just 7 years ago, we sadly had to witness another destruction, this time of religious extremists. ISIS has bulldozed and blown up this great archaeological site, using picks, sledgehammers and assault riffles, and there is hardly any statues left as we wandered through the ruins. Later on we discovered some limestone statues of king Sanatruq I (the first king of Hatra) in the Erbil Civilization Museum in Kurdistan, so luckily some statues are being kept in museums. However, most buildings and temples we have found intact, and there are plans to renovate the site with financial support of various governments, and institutions.  We were not allowed to make photos in the inner parts of the Great Temple and were accompanied by the supervisor and some military personnel.

I was a Brigade Intelligence Officer for the 101st Airborne in 2003 and I did a site survey after the "ground war" was over. After coordinating with the caretaker and his family we set up tours for soldiers to view the site. We gave some donations to the family to help them with the tours. The goal was to do more than just guard the site but also to show our soldiers about the historical site. It really is a shame that ISIS has hurt not just the Iraqis but also the world with their destruction.

Hatra was a very impressive place. I was there in 2003 with the 101st airborne. There was a unit there securing the site from looters. The man who was the caretqaker there gave us a tour. I remember walking in to the city itself, the plaza was impressive, there was an arena fairly close to an altar to one of the gods I believe. The main building held the throne room, the court room and a temple. For me it was my first trip into something that old. I loved it.

Due to intentional destruction by ISIS

IS militants have begun destroying the ruins of the ancient city of Hatra (2015.03.07)

Destroyed during invasion: Destroyed by the Sassanids in 241
Iconoclasm: March 2015, by Islamic State militants

Under control of ISIS: Actions by the Islamic State of Iraq and the Levant, which occupied the area in mid-2014, have been a major threat to Hatra. (wiki) - On the 26th of April 2017, the ruins were eventually reclaimed by Iraqi soldiers

Parthian Empire
Mesopotamia: Hatra was the best preserved and most informative example of a Parthian city... The city was famed for its fusion of Greek, Mesopotamian, Canaanite, Aramean and Arabian pantheons. (wiki)
Silk Roads: Classic Land Route; "In the 2nd century BC, it flourished as a major staging-post on the famous oriental silk road to become another of the great Arab cities" (Silk Roads Programme)
Excavated by the Deutsche Orient-Gesellschaft

Shortest WHS names: 5 letters
Location for a classic movie: Director William Friedkin filmed in Hatra for the first scene in The Exorcist (1973, Best Motion Picture at the Golden Globes), in which a priest at an archaeology dig unearths an ancient talisman belonging to Pazuzu, an ancient Mesopotamian demon.