The functioning of the Hanseatic League is not only proof of early economic cooperation in Europe, but it also founded a social and cultural community that has left its mark throughout the region, particularly in the self-contained architectural world of brick Gothic. Parts of the medieval city of Lübeck were severely destroyed during the Second World War. 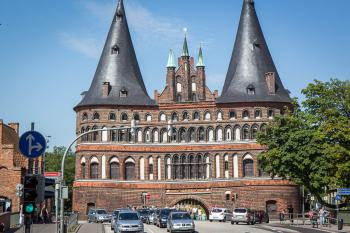 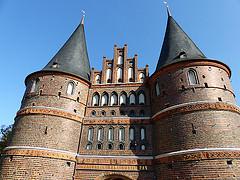 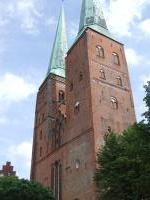 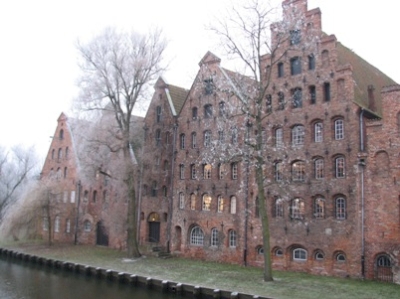 I visited Lübeck on a very cold Saturday in December. The picturesque Holstentor is the gate to the city center, with the salt storehouses right next to it. The gate now houses the municipal museum, where one can see what Lübeck looked like before WWII.

Wandering around the city's old quarter I'm afraid I have to agree with the skeptic ICOMOS-people: the fabulous remaining monuments are almost hidden from sight by ugly modern constructions, parked cars, cheap shops and eateries and (at this time of year) Christmas stalls. Lübeck's monuments are heavy on a style called "Brick Gothic", originating in countries in which there was a lack of natural stone. 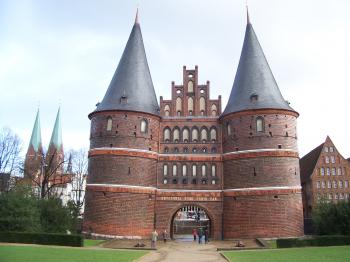 Brick architecture
Gothic: Saint Mary's Church
Designed by Hans Hendrik van Paesschen: City Hall
Star fort
Expressionist architecture: St. Catherine's Church in Lübeck dates from the early 14th centry, but its brick facade was decorated with expressionist clinker brick sculptures by Ernst Barlach and Gerhard Marcks in the 20th century. "A striking feature of Brick Expressionism is the liveliness of its facades, achieved purely through the deliberate setting of bricks in patterns. ...The facade designs were enhanced by the use of architectural sculpture, made of clinker bricks or ceramics. Ernst Barlach also created clinker statues, such as the frieze Gemeinschaft der Heiligen ("community of saints") on St. Catherine's in Lübeck (completed by Gerhard Marcks)."

Prison: The Burgkloster served as a prison in during the first half of the 20th century.
Music Academies
Historical Organs: Arp Scnitzger's famous organ at the cathedral was lost in WWII and reconstructed since.
Leaning Tower: Holsentor
Hospitals: Heiligen Geist Hospital
Granaries: Zeughaus
Historic Pharmacies: at St. Anne Convent
Horse Stables: next to Burgtor
Astronomical clocks: The astronomical clock of St. Mary's Church, constructed 1561–1566, was destroyed in the bombing of Lübeck in 1942. The present clock is a replacement by Paul Behrens, installed in 1967. (wiki)
Notable Bridges: Puppenbrücke

Damaged in World War II: During World War II (1939–1945), Lübeck became the first German city to suffer substantial Royal Air Force (RAF) bombing. The attack of 28 March 1942 created a firestorm that caused severe damage to the historic centre. This raid destroyed three of the main churches and large parts of the built-up area; the bells of St Marienkircke plunged to the stone floor. (wiki)