Over 400 bird species inhabit the Park, and it has been recognized as an Important Bird Area. It is also home to the endangered spectacled bear and mountain tapir (both only found in the Northern Andes). The park is located in the Morona Santiago, Chimborazo and Tungurahua provinces of Ecuador. 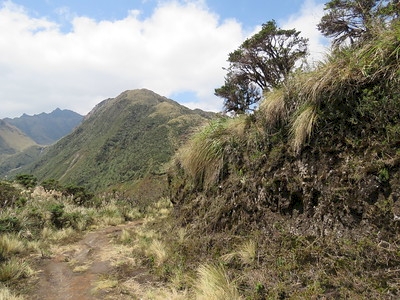 Sangay National Park is a rarely visited WHS in the central highlands of Ecuador. Only 17 community members were there before me, resulting in an 874th spot in the ranking of Most Visited Sites. That’s less than Zabid (Yemen) or Ilulissat Icefjord (Greenland) for example. It would be interesting to find out how the other visitors approached Sangay, especially before the controversial construction of the Guamote-Macas road. I did it the same way as the only other reviewer so far (Jay T): with a car and driver/guide arranged by Julio Verne Travel in Riobamba. They also advertise downhill bike tours along that road and can arrange multi-day hikes into the area.

The WHS covers only about half of Sangay National Park: the most restricted area. When you drive along the Guamote-Macas road, you’ll be in the core zone for only 8 km. The map from 2009 at the UNESCO website clearly shows the road at the southwestern tip, plus a lake system called Lagunas Magdalenas right beside it. Confusingly, their popular name is the Atillo Lakes (named after the nearby village). The outline of my day trip was to visit these lakes and drive all the way down the Guamote-Macas road to a town called 9 de Octubre, to see the landscape change from subalpine Páramo grasslands to subtropical rainforest (one of the key features of this WHS).

Driving up from Riobamba, the scenery starts with rich agricultural lands. The lava soil is nutritious. One of the main products that are created and transported from here is fertilizer. Other crops include strawberries, potatoes, cabbage and tree tomatoes. There are even numerous greenhouses, used for growing ‘normal’ tomatoes. The scenery only changes slowly after having passed the “Welcome to Sangay National Park” sign. There still are numerous villages almost all along the road.

The lakes are located at 3,466m altitude. A cold wind is blowing here all the time. I only noticed one duck braving the water. We got out at the parking lot near Black Lake, a separate lake from the Magdalena lake(s) – deeper and thus darker in colour. A small trail leads up to a hilltop from the parking. We climbed it and enjoyed the views some more. We were so blessed with the weather today, even the guide was taking lots of pictures as it rarely is as clear here as it was this day.

There is so little traffic on this road that we could stop when and where we wanted. According to the guide, rangers still spot wildlife along the road. The most sought-after mammal of course is the mountain tapir, the mascot of the park. These tapirs (mountain tapirs and ‘normal’ ones) are called “danta” in Spanish, and we even saw a sign that we had to be careful driving because of danta crossing the road. Well, we only wished to see one! We had to make do with two vultures having a snack along the side of the road.

The three volcanoes inside the park – Sangay, El Altar and Tungurahua - are difficult to see from this side. Just past the town of 9 de Octubre there's a viewing platform that supposedly has good views - but it was much too hazy when we arrived around lunchtime. In Riobamba, there’s always the Chimborazo volcano west of the park that draws all the attention. Other snowclad volcanoes rarely come into view. From the road not far from Riobamba my guide pointed out El Altar, the extinct one that has collapsed and isn’t as pretty as the other two. I saw it again the next day from the road while I was on my way to the market in Guamote. Tungurahua should easily be seen from the north (Baños, or possibly even the road to Quito). Sangay however will stay a well-hidden secret to most travellers. 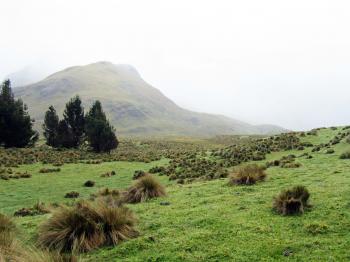