Gulf of Porto: Calanche of Piana, Gulf of Girolata, Scandola Reserve is a natural area with dramatic geological landforms and wealthy undersea life.

It also is the habitat of the rare osprey, peregrine falcons and bearded vultures. The Gulf is situated on the western coast of Corsica, between Punta Muchillina and Punta Nera.

The sheer cliffs of the Gulf contain many grottos and are flanked by numerous stacks and almost inaccessible islets and coves. The coastline is also noted for its red cliffs, some 900 metres high, sand beaches, and headlands.

Map of Gulf of Porto

At spot #728 this is one of the lesser visited sites in Europe among our community members. It comprises a coastal area in northwestern Corsica, recognized for both its marine and terrestrial features. The cumbersome name probably doesn’t help to market it: “Gulf of Porto: Calanche of Piana, Gulf of Girolata, Scandola Reserve” actually comprises one integral core zone with three distinct parts. Only the Calanche of Piana (the correct name should be the plural I think - Calanches of Piana) actually lies in the Gulf of Porto. The Gulf of Girolata is a bay of its own and the Scandola Reserve borders that bay as well. I visited the site from Ajaccio with 1 of the 2 large companies (Cap Nava, Decouvertes Naturelles) that offer day tours there. My tour costed 59 EUR and we were out for 10 hours on a large ship with some 70 passengers. From Ajaccio it takes 2.5 hours to get to the core zone. If you’re not relying on public transport to get around Corsica as I did, you could start your trip from one of the smaller towns north (Porto, even Girolata). Tours with smaller boats will be available from there. I visited on September 23 and though the low season had started already, there were plenty of boats around.

Around lunchtime we were dropped off at picturesque Girolata, the only village on this coast. About 100 people live here and it can only be reached from the sea or via a footpath. This is the lunch stop for all boats, so there are plenty of restaurants. You can also go for a walk or enjoy the beach. At the beach I found lots of hairy balls, which I recognized from an earlier trip to Formentera as the remains of Posidonia sea grass. The Calanches are also known for their many caves. The small boats around us sailed in and out, but we also came close with our relatively large ship. The skipper always first pushed the nose of the ship against the entrance of a cave, and then turned 180 degrees so that the passengers in the back could also have a look. Just like earlier in the day at the Scandola Reserve, there was ample time to photograph every rock, view or cave. 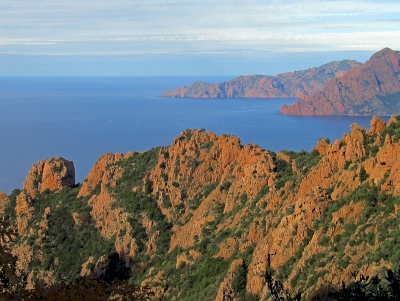 My most recent World Heritage Site visit was truly serendipitous, since the last day of my Mediterranean cruise was to take me to Monaco last December. Instead, due to rough waters, we were rerouted to Corsica, birthplace of Napoleon and an island of incredible beauty, of which the Gulf of Porto World Heritage Site is no small part. There was no way I would miss an opportunity to see a European natural World Heritage Site, so I joined a tour to visit the gulf upon arrival in Ajaccio.

The Gulf of Porto is one of France's earliest World Heritage Sites, and its first natural site. Although the site includes three main parts, I only had time to visit one of the parts: the Calanche of Piana. Up to now, I realize that I never did ask what calanche actually are: apparently they are narrow, rocky inlets (singular: calanca in Corsican). Even without knowing what the word meant, the appeal of the calanche was readily apparent with the juxtaposition of the red granite cliffs, dotted with scrub brush and evergreens, against the rich blue waters of the Gulf of Porto. Because we were visiting in December, the main road through the calanche was remarkably free of traffic, and our tour took an unofficial hike along the road for a few kilometers. The weather was sunny and warm, and we were surrounded by amazing rock formations in all directions -- pinnacles, walls, and even a heart-shaped hole in a rock. There was not much wildlife to see, but the natural beauty was fully evident.

I've read from other reviews here and elsewhere that boat tours enhance the visit to all three parts of this World Heritage Site, so if I ever find myself back in Corsica, I may have to consider taking one. This site was a memorable end to a trip!

Logistics: The Calanche of Piana is about two hours by road from Ajaccio; there are trails to explore and pull-offs on the road for scenic overlooks -- getting out of a vehicle is worth it! 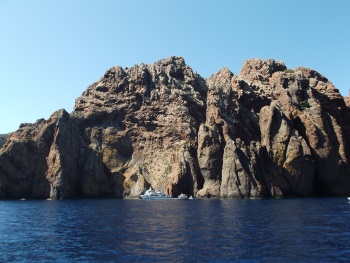 Although the views of the Gulf of Porto from Piana, Porto and Girolata are spectacular, it was really necessary to take a cruise with one of several operators in Porto to get a close-up experience of the coastline.

The three spectacular seascapes of the area included in these cruises are:

The Calanches of Piana on the south side are steep rugged cliffs of red rock, the colour of which varies with the light over the course of a day. The cliffs are riddled with caves, some at sea level which vessels can enter.

Girolata is a small touristy village beside the gulf's only beach. It is only accessible from the sea, being surrounded by steep, high cliffs.

The Scandola Reserve is an area of rocky stacks rising vertically out of the water, with arches and other features only reachable by boat. The bird and sea life is prolific here.

Porto is difficult to reach because of Corsica's terrain. I travelled there by bus from Ajaccio, and away to Calvi. Both routes involved crossing steep mountain passes and fast-flowing streams, both journeys of several hours duration. But very scenic with frequent glimpses of the coast.

Corsica is by far, by FAR, the most beautiful place I've ever visited. Crystal-clear water, pristine beaches, mountains, and a friendly atmosphere. I would recommend it as a vacation spot to everyone.

From "Cape Girolata, Cape Porto, Scandola Nature Reserve and the Piana Calanches in Corsica" to "Gulf of Porto: Calanche of Piana, Gulf of Girolata, Scandola Reserve"

Name Change to add "...and the Piana Calanches"

Paleozoic: ... to have undergone two distinct cycles of volcanic activity in the Permian. Since then cycles of erosion and rejuvenation have been at work and there are high cliffs of red porphyry, rhyoliths and basaltic pillars, considerably eroded by wave action. (AB ev)