The Taj Mahal dates from the 17th century, as a tomb for the favourite wife of Moghul-emperor Shah Jahan.

She died at the birth of her 14th child in 1630. In grief, Shah Jahan decided to construct for her a monument to show his eternal love. It took 22 years to complete. The name Taj Mahal is derived from her nickname Mumtaz Mahal: pearl or crown of the palace.

According to legend, Shah Jahan planned to erect a black version as a tomb for himself on the other side of the river. A bridge should connect the two monuments.

The Taj is situated in the city of Agra, on the banks of the Yamuna river. It is enclosed in a garden amidst fountains and ornamental trees. The walled complex further includes two mosques and an imposing gateway.

When I visited India in January 2014 I figured a trip to the Taj Mahal was a must. I had seen so many pictures and I wanted to actually be there. So I booked a flight from Southern India (warm) to Jaipur (cold) and made my way east to Agra.

And there it was... The Taj... As seen before on all those pretty pictures. But after spending some time on the site, looking at the architecture, the gardens, the interior of the Taj, ... I felt a sort of emptiness creeping up. Being there didn't add anything to what I had already seen on pictures. I actually think it reduced the value of the site to me. I asked myself why, and I came up with a few reasons:

A little later a friend of mine also went. Before going he asked me about it and I told him about my reservations. I also told him that I didn't wanna be the reason why he never went, so he should go. So he went. And he agreed with me.

Going to Agra, though, was still a treat as I also visited Fatepur Sikri and Keoladeo National Parks, two sites I enjoyed greatly. 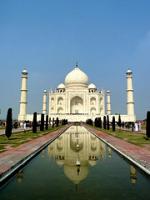 Calling this WHS a beauty is an understatement. I visited the Taj Mahal in December 2011 and spent 2-3 days exploring and taking in this wonder. The first morning rays of sunrise lifting the thick mist off the Taj Mahal is an unforgettable experience. The Taj appears before your eyes gradually almost as if it were floating in the air. A pair of Egyptian Vultures were soaring in the sky above the main white marble dome. The symmetry and architecture of the whole site is mind-bogging and it is so huge that it never seems to be overcrowded. Don't go there with an organised tour for a quick rush through the site. Take your time to admire one of the wonders of the world!

A truly stunning experience. Walking through the gate building and there it presents itself in all its splendour and glory: the Taj Mahal. Not too crowded (may 2010). As a part of a trip to northern India, the golden triangle, this was the summit.

I visited the Taj in 1987 but it doesn't really matter , does it? It's timeless. I was going to actually give the Taj a pass and skip it. After all, how many times has one seen the Taj in movies, images, brochures etc. Many times. But coincidentally, the train route i was taking from Calcutta to Bombay made a needed stop in Agra.

I arrived pre dawn and had read in the guide book that the best time to view the Taj was at sunrise, sunset, or under the stars and moon. So by chance I had arrived at an opportune time. I hired a boy who pedalled a rickshaw but he went the wrong way! yep. I couldn't believe it. Eventually we got there and i was the first one in! It helps to get there early! I managed to get a photo with noone in the foreground. I was pleased with that.

Part of the magic of seeing the Taj in person is the way the light of the sun and moon play off the marble. The mood of the Taj literally changes . It really is a remarkable experience. I also saw it in the early evening and the mood and sillouette of the Taj impressive. Best seen early or late to avoid the crowds.

Some sites Machu Pichu, The Pyramids, Petra are hard to review because they are so icconic, that there seems to be nothing more one can add.

The Taj Mahal is another such WHS, which like the afore mentioned places, really does take one's breath away; such is the power of it's radiant marble symetry.

However it does not function just upon a grandiose scale, up close the exquisite workmanship stuns, the gardens are seductive, and the ancillery buildings shield you from what by comparrison is the vulgar and mundane of the outside world.

I'm told the whole ensemble is supposed to be a relisation of heaven on earth. Did they succeed? Well if you can go and decide for yourself, it might just be the closest you get in this life to paradise.

At first light of dawn, when a cool breeze fills the air and the morning sun shines on the palace, Taj Mahal is at its height of beauty. Set against the azure skyline, it looks like a mirage in a desert - the greatest monument to love.

It was exactly like this when, on an early December morning, I made my first visit to the legendary monument. It is certainly also true that it is a very special view to see the early morning sun rays embrace this absolutely magnificent white marbled tomb.

The story has been told many times - of Shah Jahan's favorite wife Mumtaz Mahal,

who died at the age of 39 when delivering a child and the greif that then made the Shah immortalize their love by building the 'dream in marble' - 22 years in the making with the help of over 22.000 craftsmen.

History tells that when Shah Jahan started to plan for his OWN mausoleum to be built in black marble across the river Yamuna, his son had just about enough of his fathers spending and locked him up in the Agra Fort. And there he sat until the day he died, gazing at the distant tomb of his long-lost wife. Almost makes you want to shed a tear, right..?

Kipling said it was the 'Gateway through which all dreams must pass'.

Tagore said that is was 'A tear on the face of Eternity'.

Those descriptions sum this wonderful place up better than anything I could say. It's just a shame about the entry fees.

Guards arm themselves with catapults after spate of attacks on tourists by monkeys at the Taj Mahal (2019.01.25)

The Taj Mahal is to be surrounded by ropewalks, a suspension bridge, cable cars and a Ferris wheel under a plan critics have branded 'insensitive' (2009.08.06)

Domes: White marble dome
Chahar Bagh Gardens: "The garden that beautifies Taj comes from the Persian Timurid style of gardens, and is based on the concept of paradise garden' and was brought in by Babur. This garden, filled with flowers, fruits, birds, leaves, symmetry, and delicacy, served many functions along with portraying strong symbolic or abstract meanings about paradise. A paradise which, according to Islamic beliefs, consists of four rivers: one of water, one of milk, one of honey, and one of wine."
Cenotaph: cenotaphs of Shah Jahan and Mumtaz Mahal
Indo-Islamic architecture

'Threatened' by Drought or Desertification

Mughal Empire
Located in a Former Capital: Agra, the former capital of Mughal Empire (1526 - 1658)
Thomas Cook Round the World tour 1872-1873: c Feb 1873 "...where the celebrated Taj mausoleum stands prominent among all the monumental edifices in the world"

Gertrude Bell: Photo taken 27 December 1902
King Charles III: Famously he was NOT present when in February 1992 his wife "Princess Diana" had "that photo" taken of her all alone at this monument to "love" and thus announced to the world her emotional "separation" from him
Marianne North
Shah Jahan: Built as a tomb for his beloved wife, Empress Mumtaz Mahal.
Diana, Princess of Wales: Had an iconic photo taken there in 1992 ("a picture of loneliness")
Elias Burton Holmes
Lord Curzon: Curzon personally initiated and even part-funded restoration of the gardens at the Taj. He also provided 2 lamps to replace ones looted during an 18th C conflict between Mughals and the Hindu Kingdom of Baratpur.

World Monuments Watch (past): (1996)
New Seven Wonders of the World

Inscribed on a single criterion only: i. to represent a masterpiece of human creative genius
Single Monuments: Text reference only (early nomination)