The Sun Temple, Konarak is a 13th-century temple complex in the form of a huge chariot.

The temple is also known as the Black Pagoda. It was built in Orissa red sandstone (Khandolite) and black granite by King Narasimhadeva I (AD 1236-1264) of the Ganga dynasty.

The temple takes the form of the chariot of Surya (Arka), the sun god, and is heavily decorated with stone carving. The entire complex was designed in the form of a huge chariot drawn by seven spirited horses on twelve pairs of exquisitely decorated wheels. 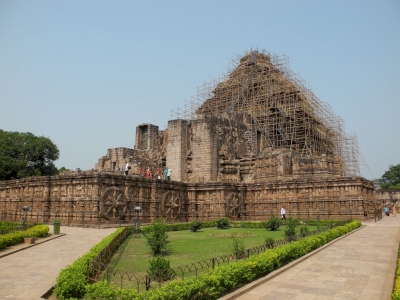 Around the main temple there are ruins of minor temples and buildings. But all in all, the area of the site is small. My visit took about an hour. There is also a museum run by the Archaeological Survey of India just north of the temple. Unfortunately, it was closed when I was in Konarak in 2016.

The Sun Temple is the biggest tourist attraction in Odisha, and it can get very crowded. The site is easy to reach by public transportation or taxi and can be done as a (half) day trip from Puri or Bhubaneswar. As with many World Heritage Sites in India, the entrance fee for foreigners is quite high but in my opinion worth it.

If you do not get enough of ancient temples, there are more in the area. The Ekamra Kshetra of Bhubaneswar (THWS) has dozens of temples in similar style, however none as impressive as the Sun Temple. Moreover, there is the Jagannath Temple in Puri, which is an important pilgrimage site but only open for Hindus (for a small donation you can have a look at the temple from the roof of the library across the temple entrance).

I from Odisha, India and i have visited Konark Temple many times, there are lots of things that the researchers need to figure out as its not only a temple but it has many hidden secrets.... People think that Dinosour existed on Earth millions of years ago, but if you have a keen look at the the stone architecture on some places at the base of the temple, you will find some Dinosour looking like stone sculpture

I had not expected to see such an architectural marvel, when i first set out to see the Sun Temple at Konark.The brilliantly carved temple tells the stories of the generations past and holds the onlooker awestruck at first sight.

Each of its wheels works as a sundial and the carvings on it bear some philosophical story or the other.

If you do go to see the Sun Temple, do not miss the Navagraha temple on its right hand side(where a row depicting the nine planetary gods from the sun temple has been kept).

Do take a pair of binoculars(to see the higher part of the temple),a cap(the sun is strong) and a camera along.It would be helpful if a guide could show you around as it would help one understand the relevance of certain sculptures and their philosophical importance in the indian tradition.

The government tourist hotel is located close to the temple itself and is quite cheap.The beach too is nearby and is a good place to unwind after one has looked around the main temple.

The hotel maintained by Orissa government's tourism department is cheap and value for money. The nearby beach is a bonus.

Sun Temples in India, by TempleNet.com

The Sun Temple at Konark was knee deep in water following torrential rains, threatening the structure and disappointing tourists. (2010.06.26)

Hindu pilgrimage sites: "Orissa came under Muslim control in 1568. There were constant attempts to destroy the Hindu temples....the Pandas of Konark took away the presiding deity of the Sun temple and buried it under the sand for years. Latter on the image was said to have been removed to Puri and kept in the temple of Indra, in the compound of the Puri Jagannath temple. According to others, the Puja image of the Konark temple is yet to be discovered. But others hold the view that the Sun image now kept in the National Museum of Delhi was the presiding deity of the Konark Sun temple..... The Sun worship in the Konark temple ended upon the removal of the sacred image from the temple. This resulted in the end of pilgrimages to Konark. " (Wiki)
Pagoda: Also known as Black Pagoda: the temple was used as a navigational point by European sailors. They referred to it as the 'Black Pagoda' due to its dark colour and its magnetic power that drew ships into the shore and caused shipwrecks