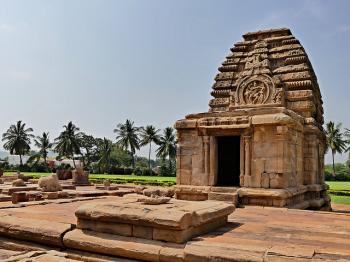 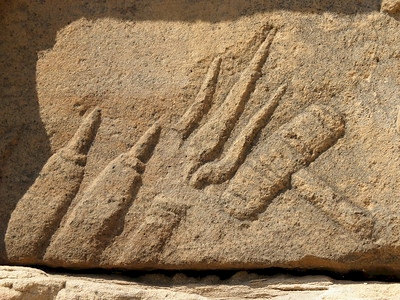 After 3.5 hours on a half-bad road (the only alternative is a “horrible road”), we arrived at the town of Patta Dakal. The WHS is signposted from afar, displaying the familiar logo. My first impression of the monumental complex was a pleasant surprise: it is a fenced-off area near the river, not too large but cluttered with temples and architectural models. I somehow was expecting a ruined archaeological site. They even succeed in keeping the grass green. The entrance fee, as at all other Indian WHS, is 250rs. For that you get to sign the visitor book – I noticed that there are about 20 foreigners coming here each day, not too bad. I visited on a Sunday, and the site was quite busy with locals.

The guide also told me that there was severe flooding here over a year ago – I had missed it in our news updates. The river overflowed, and the local people living near the riverbanks saw their houses washed away and climbed on top of the temples and other constructions on site. They were rescued 4 days later by helicopters. Many are still living in shelters. The monuments were not harmed, though they suffer quite a bit from erosion because they’re made of soft sandstone.

In all, a very worthwhile WHS to get out of your way for. I spent about 2 hours at the site. I did not visit the Jain temple which is also included in the WHS. This lies at the other end of town, and “fell down” according to my guide.

Pattadakal official guides leaving because of lack of income (2014.10.25)