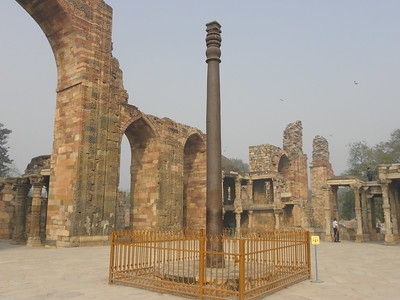 This was the first stop on my full-day tour of Delhi sights. The complex has a serene atmosphere, enhanced a little by the famous Delhi morning fog. You can sit on park benches and take in the views of these old constructions. There were about 20 other western visitors around, more than I had seen at any site outside of Delhi.

The focal point of the complex obviously is the enormous minaret. You only really feel how broad and tall it is when you're standing next to it. A magnificent piece of work.

And then there's the enigmatic Iron Pillar. It looks so out of place here, in this whole complex full of brick and sandstone buildings. It's a very thin pillar, surrounded by a fence to protect it. It looks as if it was placed here only recently, at the start of modern construction.

Another monument that I enjoyed here was the Tomb of Iltutmish. It's a bulky structure when looked at from the outside and it is missing its roof. The interior however has lots of fine carvings, both in red sandstone and white marble. 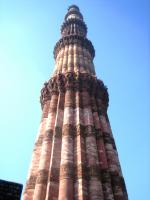 The ASI has begun a project to make all World Heritage sites in Delhi disabled-friendly, starting with the Qutb Minar (2008.05.07)

Surging crowds of 5,000 a day at Qutab Minar has left the Archaeological Survey of India scrambling to make additional arrangements, like separate entrance and exit gates (2008.04.20)

Unfinished constructions: Second minerat is unfinished
Pillars: The "non rusting" Iron Pillar. Although often called an "Ashoka Pillar" it is not. It bears an inscription which states that it was erected as a flagstaff in honour of the Hindu god, Vishnu, and in the memory of the Gupta King Chandragupta II (375-413).
Tombs: Several
Notable minarets: 72.5m high, and also the tallest brick minaret in the world (wiki)
Significant Follies: "Smith's Folly" is a remnant of the tower's 19th century restoration. Major Robert Smith of the British Indian Army renovated the tower in 1828 and installed a pillared cupola over the fifth story, creating a sixth. The cupola was taken down in 1848 and reinstalled at ground level to the east of Qutb Minar, where it remains.

Located in a Former Capital: Delhi, Capital of Sultanate of Delhi (1206-1526)
Thomas Cook Round the World tour 1872-1873: c Feb 1873 "Delhi is one of the most interesting places in c Feb 1873 "Our good friend, Mr. Smith, is a power in Delhi, both in spiritual, sanitary, and social affairs. He spent a day with us in a visit to Kutuh, 11 miles distant, where there is one of the most wonderful obelisks in the world, surrounded by ruins of the greatest antiquity and interest."

One million visitors or more: 3,8950,000
Modelled after: Minaret of Jam
Fatal Accidents or 'disasters': A "stampede" of Schoolgirls inside the tower occurred in 1979 when the power inside the tower failed leading to 20 deaths and its subsequent closure to the public.
Tintin: Tintin in Tibet
Out-of-place artifacts: Iron pillar of Delhi