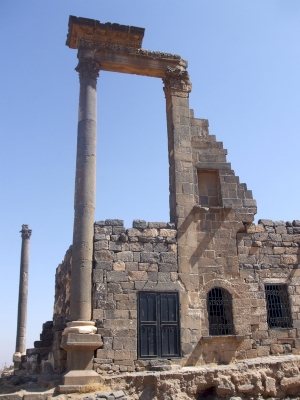 Nabatean culture: "was a major Nabataean city in the 1st century CE, but was profoundly altered by the Roman and then Byzantine presence. The Nabataean vestiges are few in number,.." (AB ev Al Hijr)
Byzantine Empire and Civilization: extensive ruins of Nabataean, Roman, Byzantine and Umayyad buildings (OUV)
Umayyad Caliphate: OUV: "there remain today extensive ruins of Nabataean, Roman, Byzantine and Umayyad buildings". The latter included Al-Omari Mosque: is an early Islamic-era mosque. The mosque's square minaret was one of the earliest examples of Umayyad-style minarets (wiki)
Ancient Roman colonies: Once the capital of the Roman province of Arabia Um er-Rasas (Kastrom Mefa'a)- started as a Roman military camp and grew to become a town from the 5th century
Silk Roads: (Near) Classic Land Route; in ICOMOS thematic study but no details on role or function