The Historic Centre of the Town of Olinda has maintained its urban fabric from the Portuguese colonial period. Among these remains are 20 Baroque churches.

The settlement of Olinda was founded in 1535 by the Portuguese. It was subsequently burned by Dutch invaders and then rebuilt in the 18th century. Its existence is strongly linked to the sugar-cane industry in this region. The townscape is dominated by rich religious and public buildings and includes lots of greenery. 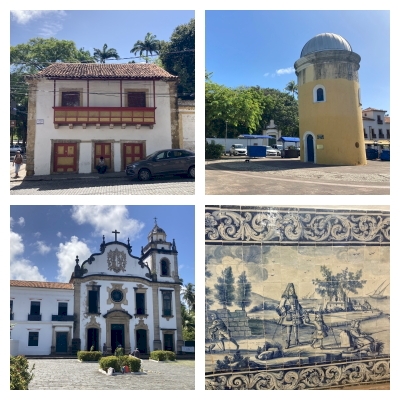 Olinda is your typical cute colonial town, as there are so many in Latin America. Colourful houses, cobblestone streets, adorned with too many churches (Baroque of course!) for its size. I stayed there for 3 nights right in the core zone at the Hotel 7 Colinas, a splurge as I am now halfway through my tour of Brazil. It has lush gardens, a swimming pool, and a decent restaurant.

The town was rebuilt by the Portuguese after the Dutch burned it to the ground in 1630, so most of what you see dates from the late 17th or 18th century. It seems to have no street plan at all: roads are steep, with uneven cobbled stones, and are scattered across the hills. And it is bloody hot!

Buildings here are protected by fences and dogs, a security feature that I only started to notice since arriving in Recife – the North of Brazil that I had experienced so far (from Manaus to Sao Luis and Fernando de Noronha) was very relaxed. A few sketchy people hang about in Olinda’s mostly empty streets (again: hot!), and hawkers will try to sell you a painting or a guided tour of the city. Several of the houses carry a sign that they are for rent during Carnival, a major festival here in Olinda.

I walked around for 2.5 hours in the early morning and I think I have seen most of it. Noteworthy buildings are the Sao Bento Church (1761), the Atlantic Club (1920), and the Observatory (1890). I found the Cathedral disappointing.

The highlight for me however was the Franciscan convent, with its interior walls covered in azulejos depicting both the story of St. Francis and "profane scenes" of noblemen, children, hunters, ships, and fishermen. It also has impressive woodwork at the 17th-century Chapel of the Chapter.

The streets are a real invitation to go back in history and imagine those streets in past centuries. The buildings are well maintained, the streets are safe, and there are extremely hospitable people.

Olinda is a town founded during portuguese colonization in northeastern Brazil. It lies only a few kilometers from the capital of the State of Pernambuco, Recife, and has many churches and buildings from the 17th and 18th centuries, all framed by the blue ocean that can be seen from its hilly cobblestone lanes. Olinda reaches its pinnacle during carnival, but all over the year is a charming place to visit.

Olinda was burnt down by the Dutch during their conquest in the 17th century, but has been entirely rebuilt after the Portuguese reconquest and not much has changed since then in its historical centre.

Recife, the neighbour city, has plenty of attractions and also an international airport that make it easier to visit both cities.

I visited Olinda in early February 1993. That date will tell those who know Brazil that preparations for Carnival were in full swing. The streets were often blocked by samba bands practicing their routines, some already in full fantastic dress. It was my first stop on my first visit to Brazil (having flown to the adjoining city of Recife from Paris).

The weather was hot and sunny with some scattered cloud.

Olinda was for some time the capital of Pernambuco and, spread out over some small hills, has a considerable number of fine buildings (mostly churches).Many were in desperate need of repair when I was there.

The historic area is not large and a pleasant couple of days can easily be passed wandering through streets of brightly painted houses, visiting the several museums and browsing the many excellent handicraft shops (small highly coloured terra cotta figures a speciality)

Like many Brazilian cities Olinda has a reputation for muggings but apart from a few, easily deterred, would-be guides I received no unwanted attention and much enjoyed my time there which made for a gentle introduction to this vast and diverse country.

Historic Centre of the Town of Olinda

Baroque: about twenty baroque churches (OUV)
Urban fabric: "a tree-covered landscape laid over an urban fabric delightfully moulded to the contours of the topography"
Rococo: Chapel of Saint Anne in Franciscan monastery: "has a panel of tiles from the golden rococo period" (text on sign at the chapel)

Festivals: Carnival
Slavery: The city is built on wealth from sugar grown and harvested by slaves in the plantations of Pernambuco. In the Praça da Abolição (Abolition Square) is a statue of Princess Isabel, who, in 1888, signed the Lei Aurea (Golden Law) abolising slavery in Brazil. She did this as regent whilst her father Pedro II travelled abroad. The law (signed in Petropolis) was promulgated in this square.

Mapped or Illustrated by Blaeu: On top frieze of "Americae nova tabula" (1617)
Charles Darwin: "The channel by which we went to and returned from Olinda was bordered on each side by mangroves", visited from Aug 12 1836

Astronomy and Astrology: The Alto da Sé Astronomical Observatory is an observatory located in the city of Olinda, Pernambuco, Brazil. It was built near the place where, on February 26, 1860, the French astronomer Emmanuel Liais observed and described the comet Olinda (C/1860 D1), being the first comet discovered in South America and in Brazilian territory. (wiki)

Built or owned by Dutch: In 1630, the Dutch invade Olinda and dominate Pernambuco. The dominance lasted from 1630 to 1654.
Built or owned by Portuguese: The settlement of Olinda was founded in 1535 by Duarte Coelho Pereira, a nobleman, military leader, and colonial administrator in the Portuguese colony of Brazil (wiki)
Poetic Quotations: Olinda is all for the eyes it's not tangible, it's all desire. No one says, "That's where I live." They just say, "That's where I see." -- Celebrated Brazilian poet Carlos Pena Filho, in his poem Olinda (source: wikivoyage)

World Monuments Watch (past): Historic Olinda and the Convent of San Francisco (2006, 2004)