The Abbey of Fontenay was founded by Saint Bernard of Clairvaux in 1118. Located in a small forested valley 60 kilometres northwest of Dijon, it achieved great prosperity in the 12th and 13th centuries. Fontenay enjoyed the protection of the Kings of France but was plundered in the Hundred Year's War and the Wars of Religion. Later, its fortunes declined, and the refectory was demolished by the monks in 1745. The abbey was closed in the French Revolution.

Apart from the demolished refectory, the abbey retains almost all of its original buildings: church, dormitory, cloister, chapter house, caldarium or "warming room", dovecote and forge, all built in Romanesque style, with later abbot's lodgings and infirmary.

The Cistercian Abbey of Fontenay is a 12th century former monastery in Burgundy. The Cistercian godfather Saint Bernard of Clairvaux found a sufficient remote location to create a new community of monks, one of many at that time. The Cistercians broke away from the mainstream Benedictines because they felt that the Benedictine monks had become too worldly and devoted too little time to manual labor. The Cistercians made up for that in self-sufficient communities like this. The Abbey owes its place on the List to its excellent state of preservation. I visited it by car from Reims on a combined day trip with the WHS of Vézelay. In the year 2015 this still is an off-the-beaten track location, though the Abbey receives over 100,000 visitors a year. I drove on minor roads for over an hour, passing this region’s typical ramshackle villages that look deserted. Only at the site’s car park I was back among living creatures again. I arrived around 10.30, at the same time as two buses with German tourists. Also I counted some 40 cars with individual visitors. The 11 a.m. tour attracted some 35 people. Explanations are given only in French, so when that's not your first language you have to listen in very closely. Honestly I missed about half of the stories that were told. They do come in great detail. The tour covers no other areas than you can visit individually, but it is worth joining for some extra detail. One of the nicest spots is inside the Abbey Church, where a floor covered with enamelled tiles, the old altarpiece and sarcophagi of a Burgundian knight and his wife fight for attention. This might not be one of the most famous French WHS, but it is really worth a detour. I especially liked the variety in buildings, such as the dovecote, the dog kennel, the monks' sleeping quarters, the bakery. The tour ends at the forge, where the monks produced tools. They extracted iron ore from a hill that overlooks the monastery. By diverting the river of Fontenay, water wheels were able to power the hydraulic hammers that would beat the iron. The forge was created around 1220 and became the first metallurgical factory in Europe. 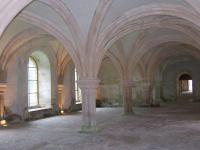