The Church of Atlántida is a construction known for its innovative construction technique designed by Eladio Dieste.

The works of Eladio Dieste show a local, innovative form of architecture. He was an engineer and built a range of structures. He started in the 1940s. His works can be found in Uruguay, Brazil, Argentina and Spain.

Map of Church of Atlántida 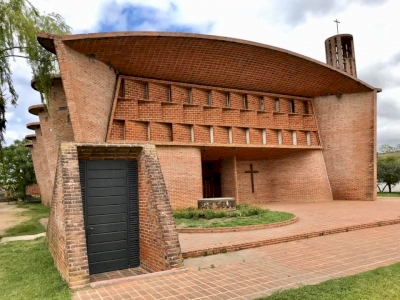 The work of engineer Eladio Dieste: Church of Atlántida

Brick architecture: the Church complex, all built in exposed brick (AB ev)
Expressionist architecture: Brick Expressionism
Domes: The baptistery is an underground construction covered by a spherical dome of reinforced brick. On the top of the dome a cylindrical skylight lets the natural light fall on the baptismal font. (AB Ev)

Freestanding Bell Tower: The bell-tower is a pierced reinforced brick tower (diameter 2.80m, 15m high) and is crowned by a depressed conical dome from which the bell hangs (AB ev)
Unfinished constructions: The belltower stands to the side of the church, as it was meant to be a focal point of a future square. This idea was never precisely formulated by Dieste, however. (Nomination text, p. 22)

Fusion: The church is inspired by Italian paleo-Christian and medieval religious architecture, while also applying modern scientific and technological knowledge. It embodies the post-war search for a renewed architectural language, expressing a modernity rooted in tradition and in the vernacular in Latin America and worldwide. (official description)

Named after individual people: Eladio Dieste (in full name): an Uruguayan engineer who made his reputation by building a range of structures from grain silos, factory sheds, markets and churches, most of them in Uruguay and all of exceptional elegance. (wiki)

Mathematical Concepts: One of Dieste's structural innovations were Gaussian Vaults. Gaussian Vaults are based on rationalizing the construction of double curvature forms using standard hollow-core ceramic units with steel reinforcement. The vaults take their name from German mathematician Carl Friedrich Gauss, and refer to the normal distribution of a curve. The double curvature Gaussian form is used to prevent bending, maximize span, and minimize the material thickness of the vault.

Inscribed on a single criterion only: iv
Reduced from broader TWHS: The original TWHS was a serial nomination of works of Eladio Dieste. (AB Ev)