The Migratory Bird Sanctuaries along the Coast of Yellow Sea - Bohai Gulf of China cover a mudflat system serving as bird foraging and resting areas.

The inscribed area with 2 components is the first part of a much broader future one. 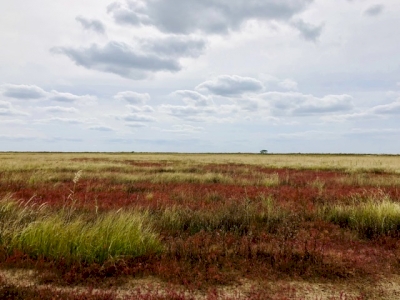 It is tricky to plan a visit to this site. There are limited English information online. The detailed maps on the dossier shows three interpretation centers open for visitors (Yancheng Nature Reserve for Rare Birds, Dafeng Milu Nature Reserve, Tiaozini Scenic Area), but all in the buffer zones. Our Chinese fellow-WHS enthusiasts Wechat group also don’t know where and how to get to the core zones.

Only the middle section of Yancheng Nature Reserve is in the core zone. The Reserve for Rare Birds is completely in the buffer area but abuts the core on its northeast corner. Likewise, only the northeast section of Dafeng Milu Nature Reserve is in the core, the deer breeding center is way far from the inscribed area. And only one side of the Tiaozini Scenic Area abuts the core zone too.

My concrete plan was go to Yancheng and Dongtai and ask locals for specifics upon arriving. I dragged my Non-WHS seeking Taiwanese friend for a weekend trip to help me talk to the locals. It went well as expected. At the two interpretation centers I visited, I was able to see what gives the OUV and managed to walk into the core.

* Yancheng Nature Reserve for Rare Birds
Take bus K2 or K202 from Yancheng Coach Station or Yancheng Railway Station. It takes bit more than an hour since the buses run slow and numerous stops along the way.

This the primary tourist area of the WHS, where the well-photographed crane building is located. It seems tacky at first. But seeing it in the middle of the marsh, it builds up the anticipation upon entering and provides lasting impressing when leaving. It also acts as the anchor for visitors to not get lost while exploring the reeds.

The site is a hybrid between a zoo with cared birds for show and a wild nature reserve. They breed and take care of sick/injured the red-crowned crane here. So, you are always assured of seeing one of the iconic birds that gives the site OUV. At certain times of day, they let some to fly out, perfect for “instagrammable” shots.

The park is mostly reeds ponds and marches. There are camouflaged bird-watching tents scattered around to perfectly observe them without scaring them away. You can rent a bike (20 RMB per 2 hours) to go around the park. At the corner, in the core zone boundary, there is a road to the monitoring station inside the core zone. It is supposed to be for staff only, but I still went in. As of my visit, site-seeing tents going to the core zone are being built.

My visit was in mid-day. I only saw some birds in the park and in the core but there are lots of chirping. There seemed to be different species. At the best time of day, I can only imagine the flocks flying over. Birders for sure will enjoy this site. As for me, I felt wanting and decided to ensure I reach Tiaozini expecting the flocks to be there. 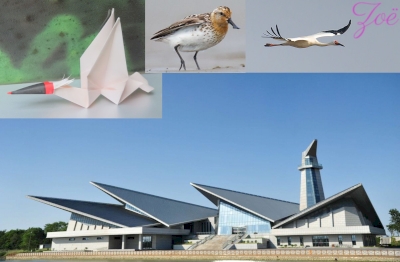 There was some confusion about where the places are until I checked the official map, and even now there is confusion. China news outlets reported the Dafeng Milu Nature Reserve to be included but actually it is not. There is an interesting history about that deer park (deer got eaten to extinction!!) and you do get to see many, many birds there but I am very sure it is not part of the inscription. My friend's family owns an eco lodge in a similar forest reserve in Jiangsu and you see many birds there of this caliber but they are obviously also not inscribed. To add to this, the entire "Yancheng Coast" is a bird paradise including several islands that are famous birdwatching destinations. China planned to inscribe many reserves/parks but ended up with just 2 to begin with - I'm guess to push the inscription through easier and add more later - but then again they do often just care about numbers so just having an inscription now doesn't mean they will prioritize extending it instead of grabbing a new +1.

Anyhow, there are 2 places near the town of Yancheng north of Shanghai and the only I chose to visit the site called "National Nature Reserve for Rare Birds". You can take a bus here from Shanghai (it's longer than you think) but I chose to fly to Yancheng instead. The flight is 1h from Hongqiao aiport. Upon arrival I took a taxi to the bus station for the K2 bus. There is a public bus from the airport to said bus station but I suspected it to take long. I only arrived at Yancheng at 2pm and the place I wanted to visit closes at 5 already. The K2 bus takes over an hour because the distance is still 40km. I made it to the reserve before 4pm. That might leave me with only 1h but I found it adequate for my kind of visiting. They didn't exactly kick me out at 5pm so I had 90 minutes in the park. If you are into birdwatching I understand you want to stay here longer for sure. The first striking thing you will see is the massive "crane" building, with the wings as roof and the head being a lookout tower!! Excellent idea.

After paying the 40 RMB I got to walk around on paths around the lakes. The red-crowned cranes are everywhere but they come in higher numbers in winter. I was told that September/October is the "best" time to visit but I think that's not necessarily true. There were many birds and the nature starts to become red-ish colors which some photographers totally dig, but the actual rare birds don't arrive from Siberia until it's dead cold up there. So perhaps November is the better time to go as it's still warm in the area and more birds have arrived. Other birds I saw was a Siberian crane, so yes they do come around this time! The main draw for birdwatchers are probably the tiny spoon-billed sandpipers because there are only a few dozen in the park at the most. They are not as cute as the one in the Pixar short but still a top sight because of their size and distinct bill. So, no, I didn't see one, and the picture is from a picture inside the building.

The area was already a Ramsar Wetland and a UNESCO Biosphere Reserve before joining the ranks of WHS. The added protection is supposed to help the wetlands. I disagree that adding another title will help that much but if they say so I'm fine with it. The biggest problem is not the bird poachers but the degrading of the land by China's new cities being built up nearby. Is that actually going to stop? Not in a hundred years. There are actually some cities on what used to be wetland and they are only a decade old. Basically some investment group came in, bought land (or leased for 99 years as it is official in China) and dumped a community of houses as per blueprint all around the country. I'm actually thinking that having a world heritage nearby makes them sell land even more!

To sum up I always like nature reserves but this one seems like an attempt to get tourists rather than protection. The sight is nice for the casual birdwatchers and serious ones alike. Best time to go still TBD maybe the hardcore birdwatchers will just go once a month lol

Yellow Sea: "along the Coast of Yellow Sea"

Extensions on Tentative List: The Coast of the Bohai Gulf and the Yellow Sea of China (2017, 2021)