The 5 locations, spread out over Burkina Faso’s territory, comprise iron ore smelting furnaces, slag heaps and other traces of mining. The development of this technology has lead to blacksmith traditions that are still alive today. 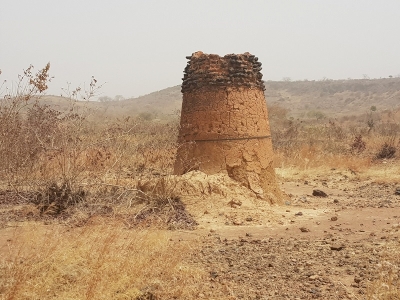 During my short stay in Burkina Faso in February 2019 I was unable to visit its two WHS – Arly National Park was a no-go zone and Loropeni required three more days that I did not have. So I did my best to visit the site that hopefully will become WHS in July 2019 – Ancient metallurgy sites. At least one location seemed to be quite close from Ouagadougou – ovens of Tiwega, near Kaya.

Kaya was theoretically located on the border of the no-go zone, but the taxi driver at the Ouagadougou airport assured that it was safe. We agreed for 50,000 CFA (around EUR 70) for the trip. The road to Kaya took us two hours and did not look like a road through a country with a terrorist threat. For over 100 kilometers, we did not see any police checkpoint (incidentally, perhaps that is why it is easier for extremists to act here). We got to Kaya and the town positively surprised me - it even has a museum (although it did not work, you could at least see or buy some local craft).

Immediately afterwards, the tracking of the proper destination began. The place we were looking for - Tiwega iron furnaces - was to be located only a few kilometers from Kaya. Google even had its exact coordinates, but it turned out to be worthless (its real location is 13.087748, -1.144837). There was a signpost along the main road, but in the labyrinth of dirt roads there was no chance of finding these ovens on their own. We had to ask for help in the nearest village.

And there were good news - they knew where the furnaces were and were able to take us there. But there was one problem ... the head of the village had to know and agree, and at that moment he was not there. He went to Kaya in business matters, and his phone was silent ... Fortunately, there was a young man who jumped on the motor and offered to find the boss. We were offered chairs in the central place of the village and were told to wait. We were a little anxious, because this waiting could be no matter how long. But it did not take more than twenty minutes and our messenger was back, along with the head of the village. The boss turned out to be a good boss and not only agreed to be our guide, but even offered a ride with his own pick-up (you could not go there with a normal car).

After a 10-minute drive and a 5-minute walk, we finally got to the ovens. That day there was unmerciful heat - about 35 degrees, and there was virtually no shadow in the place where we were. However, the head of the village was parading in a warmed-up jacket all the time! I would think that this was a sign of power, but I had seen more people for whom February in the Sahel is really winter - for example, soldiers walked in thick woolen caps. I am afraid to think how it looks in the middle of the hot season, in May or June.

The boss turned out to be not only a leader, but a full guide. It was obvious that he did not guide tourists for the first time, and he mentioned that there were some international guests before – clearly the result of the candidacy at UNESCO. The boss himself guided a delegation from the German Herzogenaurach, which is the twin city of Kaya. And so we learned that the stoves were used in the XIV-th century and very quickly abandoned. From one batch, 15 to 25 kilograms of pig iron were obtained, and 10 times more coal (I guess charcoal) than ore was put into the furnace. The temperature in the oven was about 1600 degrees, and the obtained pig iron was also cleaned in much smaller furnaces. The most interesting was the way the ore was found – the best way was to walk barefoot, because the ground in a place with iron ores was so warm that even the locals were not able to tread on it. Another way is observation of nature - apparently there is a kind of bush that grows in the close proximity of iron ore.

We were also explained why the villagers had to call their head. The place where the ovens stand is, in the local tradition, was treated as sacred and ordinary inhabitants without the head could not and did not want to go there. Women who could not become pregnant appeared there in order to find support for their problems in contact with supernatural forces. As you can see, this tradition has remained alive and so far. The Chief on the occasion explained that his position is passed from father to son, but his power is less than it used to be. As you can see, there is a bit of it left, at least in the symbolic sphere …

In general, I loved my visit to Tiwega and believe it will be a nice addition to the World Heritage List. Besides, how many industrial sites in Africa are inscribed until now?

Reduced from broader TWHS: Ronguin
Name changes: Addition of "of Burkina Faso" to the name upon inscription