The Tidal Flats (Getbol) on the southwest coast of Korea, distributed in Gomso Bay, Yeoja Bay, and Hamhae Bay (seashores) and the Sinan archipelagos, are unique macrotidal flats where typical embayed tidal flats turn into open-coast tidal flats during the monsoons.

The tidal flats also serve as a stopover for migratory birds flying to Siberia on the East Asia Flyway. In addition, a variety of life forms are found in the southwest tidal flats; it is home to some 150 species of macrobenthos, and the once damaged colonies of halophytes are thriving on the land today. 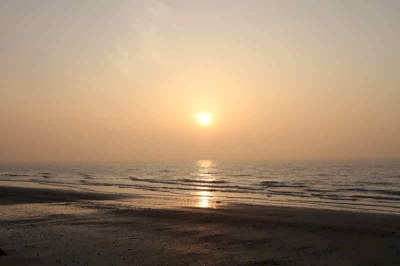 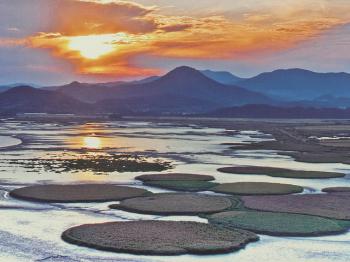 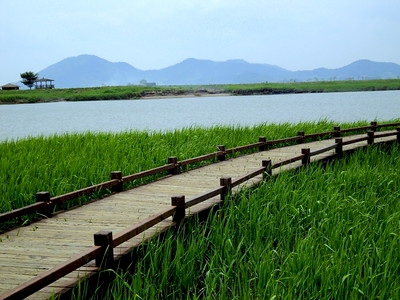 Upon visiting Suncheon Bay in 2011, I quickly came to the conclusion that these highly diverse tidal flats have potential for world heritage status. As one of the most beautiful natural places in Korea (in my opinion), I am now interested in visiting more "Getbol" in Korea. Besides Suncheon, there are 5-6 other major tidal flat locations in southwestern Korea (even more have been protected recently leaving potential for a future expansion). Suncheon Bay is pristine, picturesque and the most well-known. Inevitably, this results in higher developments in tourism infrastructure to manage larger numbers of visitors. The tidal flats are home to a diverse range of species, from various types of crabs, mudskippers, to a multitude of common and rare birds. Suncheon Bay was registered on the Ramsar wetland list in 2006, Muan Getbol in 2008, Seochon Getbol in 2010, Gochang - Buan were registered jointly in 2010, and lastly Jeongdo (Sinan) Getbol in 2011. Species like the Spoon-billed Sandpiper and Oriental stork are amongst the numerous endangered waterbirds that inhabit this ecosystem. The Seochon Tidal Flats do not seem original to the identified components in the 2010 TWHS, but does seem to be included now. I visited this tidal flat region on a trip to Gunsan, but was largely unaware of its importance in comparison to sites like Suncheon Bay.

In 2019 the Migratory Bird Sanctuaries Along the Coast of the Yellow Sea was inscribed (though the recommendation by IUCN was Deferral). Yancheng is located about 520 kilometers from the Sinan Tidal Flat in Jeollanam-do, Korea. According to the respective nomination documentation and Korean Getbol description there are multiple significant differences in the adjacent ecosystems. One being, "Although broad intertidal flat zones are distributed on both shores of the Yellow Sea, the tidal range is different between the two coasts." Based on our community score for China's "Migratory Bird Sanctuaries" WHS and the IUCN evaluation, inscription may have been premature, but the overall project (phase I and phase II) are ambitious and admirable if the end result is permanent protection for these important natural ecosystems. I for one will be pleased to see more of this region registered and protected, specifically from further land reclamation, but also appreciated for its natural beauty and ecological importance.

There have been several improvements over the last decade or so specifically in visitor accommodations/experiences and access. For example the Muan Ecological Tidal Flat Center opened in 2011. The Sinan Tidal Flat & Cittaslow Center which has evolved over the years, will likely be an ideal place to visit to check off both the Jeungdo Tidal Flat (Sinan component) and the Taepyeong Saltern. Keep in mind, many of these local museums are geared toward children and the elementary age education field trips that are so frequent in Korea.

Yellow Sea: "Situated in the eastern Yellow Sea on the southwestern and southern coast of the Republic of Korea" (Official description)
Archipelagos: "The area has an OUV that reflects the diversity of the island-type (archipelagic) tidal flat ecosystem and its geological and geomorphological features." "The nominated property includes more than 900 islands, between which are vast areas of tidal flats." (Nomination text, p. 17, 51)

Holocene: For the migratory birds

Yeosu Hotspot : < than 25km from Suncheon Bay and under 50km from Boseong Tidal Flats