The Sanctuary of Bom Jesus do Monte in Braga is a sanctuary on the top of a hill and a catholic pilgrimage site.

The complex is known for its monumental, Baroque stairway that climbs 116 meters. The sanctuary was built on a spot where hermits had settled from the 14th century on. It has been rebuilt and much further extended during the following centuries.

Map of Sanctuary of Bom Jesus do Monte in Braga 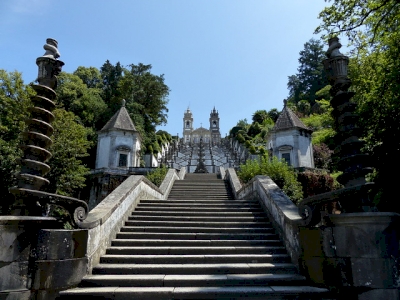 I visited this WHS in August 2014. The inscribed sanctuary in Tenoes is just a short detour from Braga. It was fun to catch a short funicular uphill ride to the sanctuary from the upper town of Braga, parallel to the Escadaria de Bom Jesus to the highest point of 116 metres at the statue of Saint Longinus.

The architecture of the zigzag baroque staircase is the main highlight of this WHS but it isn't unique in Portugal or on a global scale. Similar examples include the Sanctuary of Our Lady of Remédios in Lamego, the Nossa Senhora da Paz church in Sao Miguel, Azores or the Nossa Senhora dos Remedios Church in Sao Luis, Brazil and the inscribed Sanctuary of Bom Jesus de Matozinhos in Congonhas, Brazil. So its OUV lies in possibly being the first example of such an architecture which influenced the construction of other worldwide.

Being a pilgrimage site, as the pilgrims climbed the stairs, by tradition encouraged to do so on their knees, they encountered a theological programme that contrasted the senses of the material world with the virtues of the spirit, at the same time as they experienced the scenes of the Passion of Christ. The culmination of the effort was the temple of God, the church on the top of the hill. The presence of several fountains along the stairways give the idea of purification of the faithful. The 'new' church on top was one of the first Neoclassic churches of Portugal. 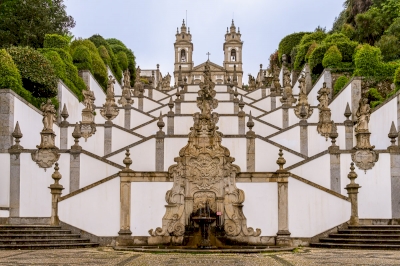 The sanctuary of Bom Jesus do Monte is comparatively young for a religious site – the pilgrimage church dates only from the 17th century, and the current ensemble was fully established less than 200 years ago. This ensemble, especially the Baroque stairway leading up to the main church, features in many travelogues of Northern Portugal as a wonder to behold. It is also up for enshrinement on WH list this year, which played a role in pushing it into a must category on my recent Portuguese itinerary.

The main part of the stairway is a truly impressive sight, even under rainy skies that accompanied my visit. As a non-believer, I can only guess the impact it must have on the actual pilgrims, who are encouraged to make the ascent on their knees.

The total number of steps from the parking lot at the foot of the hill to the church floor is 582 by my on-the-spot count. Over half of that total is along the park-like lower portion of the climb and roughly 200 steps comprise the gorgeous symmetrical zigzag stairway.

The vibrant church interior is headlined by the altar, uncommonly designed as a diorama. Half of the interior was covered in scaffolding due to renovation work. Even in this circumstance, lingering in the church was well justified. I imagine the final outcome of renovation will be entirely jaw-dropping.

Bom Jesus do Monte can be reached in about 45 minutes from Porto by car. My visit, including climbing the entire 582 steps up, spending a bit of time in the church, and then descending back down lasted under an hour. In good weather, I suspect I would have lingered on the various landings of the staircase a bit longer. For those who do not want to or cannot climb the steps, a funicular provides an alternative, but it has a limited schedule. You could also attempt to drive up the hill and park closer to the church. If you choose either of these less-taxing options, you owe it to yourself to walk down and then back up at least 100 or so steps, or you’ll miss the main part of the attraction. 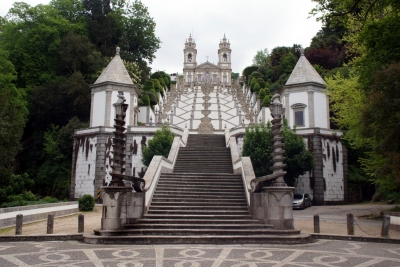 The Sanctuary of Bom Jesus do Monte is a pilgrimage site, only about 25 kilometres north of Guimarães. The pilgrimage church is located on the eastern outskirts on a hill overlooking the city of Braga. In the 14th century, the first chapel was built in that place. The construction of the ensemble in its present form, with the Baroque staircase and the pilgrimage church, was started in the 18th century and completed in 1811.

Having already visited several monasteries, churches and cathedrals on my trip to Portugal, I was not very keen on visiting yet another religious site. But Bom de Jesus is scheduled for decision at the WHC session in 2019, thus it was no question that I made the short detour via Braga on my way from Oporto to Guimarães.
There are three options to get to the pilgrimage church. The classical way is to climb the imposing Baroque staircase. Second, with the historic funicular. And third, by car or bus straight to the top of the hill. Of course, I chose the classical way, well not really the classical way, that would mean climbing the stairs on hands and knees. For my way down, I took the funicular.
The staircase has almost 600 steps and leads in a zigzag up to the forecourt of the church. The first part of the pilgrim path is dedicated to the Via Crucis, several chapels represent the Passion of Christ. After a few minutes walk through a forest, you arrive at the first viewing platform. The photo shows the view to the upper two-thirds of the staircase, this is the most impressive part of the site. On each landing is an allegorical fountain decorated with statues and other symbolic elements. The fountain on the second platform symbolizes the Five Sacred Wounds. The following series of fountains represents the five human senses: sight, smell, hearing, taste and touch; each with its own fountain. This was my favourite section: the water gushed out of orificies such as nose, ears, eyes and mouth. The last section is dedicated to the three Catholic virtues: Faith, Hope and Charity.
The Baroque staircase with the view of the church was a pleasant surprise and is the most outstanding part of the TWHS. Less impressive was the interior of the church, worth mentioning is the altarpiece depicting the crucifixion.

I visited this TWHS on a weekday morning in May 2018. When I arrived at the entrance gate at 9 am, there were only a few other visitors, but after an hour the first busses with tourists arrived. Apparently it is a popular pilgrimage site, as shown by the numerous restaurants and hotels on the hill. All the former pilgrims' hostels around the church have been converted into hotels. The Sanctuary is surrounded by a small forest with artificial grottoes, statues and a small lake. In total, the site has a size of 30 hectares (according to the T-list entry on the Unesco website), obviously large enough to nominate this TWHS as a cultural landscape. The benefit is that the state party can nominate two cultural sites in one year.

In my opinion, Bom Jesus do Monte has a good chance of being inscribed in the WH list. At least better chances than the Mafra Palace, the second Portuguese nomination for 2019, and I liked it better than most of the other TWHS that I have visited on my Portugal trip. Baroque architecture and Christian sites are already well represented on the WH list, but the impressive staircase is an exceptional feature. Maybe enough to convince the WHC of the outstanding universal value of the site. Anyway, I enjoyed my little pilgrimage more than I had expected before. 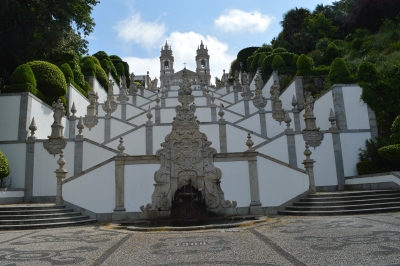 In June 2018, I rented a car and drove from Porto to the Sanctuary of Bom Jesus, a pilgrimage site in northern Portugal that’s known for its monumental zigzag stairway. Pilgrims traditionally ascend the 577-step Baroque staircase on their knees. I opted, instead, to take the 1882 water-powered funicular.

Baroque: Carried out primarily in a Baroque style (AB ev)

Built in the 17th century: The Confraternity of Bom Jesus Do Monte was founded in 1629. It is from this date that Mount Espinho, including its various small heritages, is considered as a Calvary mount (AB ev)