The Sassanid Archaeological Landscape of Fars region covers monumental buildings, inscriptions, and other relevant relics of the three main cities of the Sassanid Empire.

Eight archaeological sites in Firuzabad, Bishapur, and Sarvestan have been inscribed. They stand out for their rock carvings and sculptures. The empire also is known for its contribution to the distribution and establishment of Zoroastrianism, and the site includes major Zoroastrian monumental architecture such as the Takht-e Neshin fire temple. 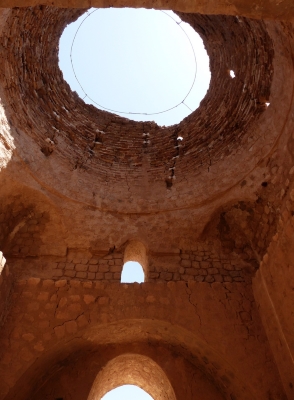 Sassanid Empire
Located in a Former Capital: first capital of the dynasty
Parthian Empire: remains of a previous Parthian settlement in Bishapur

Reconstruction regarded as unsatisfactory by UNESCO or ICOMOS: include today a large percentage of new materials, namely plaster and black cement, with new stones used for the facing of the walls. This situation, in ICOMOS’ view, directly affects the authenticity of the monuments within the nominated property. (AB ev)
Already inscribed still on T List: Firuzabad Ensemble TWHS