It is covered by lakes and temperate forests that include the best conserved pockets of globally endangered Alerce tree species. The Alerce (or Patagonian Cypress) is the second-longest living tree species in the world (> 3,600 years). 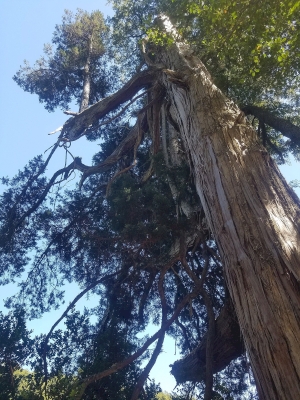 I visited the Parque Nacional Los Alerces during my trip to Argentina in February-March 2022. Unlike Nan, since I was visiting in high season, access to the park was relatively easy. However, like him, I was also told no at every agency in town. Indeed, I wanted to do the park's flagship activity, the lake safari, which takes you to the millennial alerces. However, only one company offers this excursion in the park and their boat was fully booked for several days. So I had no choice but to go for a simple hike.

In January and February, Transportes Esquel offers daily buses to the park. I bought my ticket the same morning at the company's counter in the bus station. Six vehicles full of tourists were leaving simultaneously that morning. The company makes a stop at the park entrance for everyone to buy their ticket, then continues into the interior where the bus stops at each point of interest to let people off. The journey takes 2.5 hours to Lago Verde, where I was getting off, but the bus continues to Epuyén at the north of the park. The return journey is also at the same time for everyone and the driver makes sure everyone is on board, which can keep you waiting for latecomers for quite a while.

The park is full of trails in several areas. I had chosen Lago Verde as this is also where the boats for the lake safari leave from. The strategy was to show up at the dock and hope that some ticket holders fail to arrive in time. The staff there confirmed that we could have taken their place if that was the case, but luck was not on our side. Nevertheless, this is not the only attraction of Lago Verde. This area, among the busiest, is beautiful. The Rio Arrayanes, with its clear, turquoise waters is magnificent. The rapids that punctuate it offer a superb setting, magnified by the green of the forest and the snowy peaks. The mirador on the Lago Verde itself is also very beautiful. The last point of interest in this sector is the presence of a solitary alerce (el Lahuan solitario), between the footbridge and Puerto Chucao. Although it is relatively small (62 cm in diameter) and only 300 years old (!), we can say that we have seen one.

For the afternoon, the trail to Laguna Escondida seemed a good option, but I noticed on Maps.me that the trail along the Rio Arrayanes was called Viejo Lahuan near its end. So I followed this trail in the hope of seeing another alerce specimen. The trail is very interesting because it passes through several types of forest stands (including a dense forest of orange-barked arrayanes) and is dotted with interpretive signs about them, as well as offering beautiful views of the river. And, as it happens, at the end of the trail we come to a second alerce (el Viejo Lahuan, photo), this one measuring 80 cm in diameter. Although its age was not specified, we can guess that it must be older than the first one.

Without equalling the splendours of Los Glaciares, this Patagonian park nevertheless deserves its place on the list. The scenery is splendid and even a less satisfying visit than a lake safari is worthwhile. I also used Esquel as a base. This town is connected by an overnight bus to Puerto Madryn and Trelew (Peninsula Valdes), but it takes you a whole afternoon and evening to reach Perito Moreno (base for Cueva de la Manos). A word about Trevelin in closing: if you don't need to go there to hitchhike, don't. There is nothing to do in this village, especially in the morning. You need a motorised vehicle to get away from it and visit interesting sites. 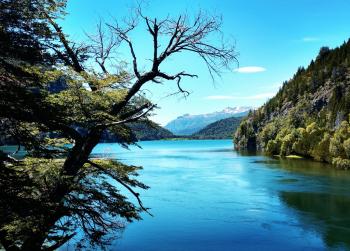 “No bus.” I stood there at a loss. I had made my way past four travel agencies in Esquel and now stood in the local tourist office. “Tomorrow, sorry, but no bus. Bus was today. Next bus is on Saturday.” Everyone had told me that, so it was of little surprise. Still, I wasn’t happy as this was my last chance.

It was Wednesday evening and my bus to Puerto Madryn and Peninsula Valdes was booked for the next night. I had only the following day to visit. And then the lady of the tourist office asked: “But why don’t you try to hitchhike?”

I let that one sink. The last time (and the first time for that matter) I hitchhiked was back in January. At the time I was in Donana National Park and the bus connection with Sevilla was rather awkward. To kill time I figured to walk to the coast and see the beach on a winter day (recommended) and check out if another park visitor center was opened.

Eventually, a car driven by an elderly Spanish couple stopped and asked if I needed a ride. They dropped me off at the visitor center. After I had completed my visit, I decided to go all in, put my thumb up and in 5min had hitched a ride to the beach. So, I thought ... Let’s try this in Argentina.

That night I slept very little, always worrying about not getting back in time or how it would work. Then around 8:30h I went to the junction holding up my thumb. In total it took me 2h to reach the park. Not too bad I would say and a nice experience.

The key to fame of the park are the Alerces trees, the second oldest species (after Sequoias). I only managed to see one tree as the main area was not reachable. You need a boat and that was not running daily (yet again) due to me arriving in pre season. But, luckily, the Alerces are not the only asset of the park: glaciers, trees, mountains, lakes ... I felt reminded of the great North-American national parks.

To get through the park I hitched another ride with a park ranger. The distances are great and the roads terrible. We chatted a bit and he told me about his life as a ranger. They live on site in housing provided by the park. But it’s hard if you are single because you are so far away from it all ...

On my way back I was dropped off in Trevelin, a town founded by former Welsh immigrants. I cannot specifically recommend going there as little Welsh heritage remains. But there are hourly busses back to Esquel and with hitchhiking you take what you get.

Looking back, Los Alerces was a nice and fitting conclusion to my first time in the Andes. I would encourage you to visit yourself if you are travelling along Ruta 40.

Even if it weren’t for the Alerces trees, I feel the park deserves its WHS status. It’s substantially further north than Los Glaciares/Torres del Paine and represents a different eco system. I do feel, though, that the inscription could be even stronger, if it also covered the western side of the Andes in Chile.

The hub for Los Alerces is Esquel, a nice town on Ruta 40. From Esquel you have connections up north to Bariloche, east to Puerto Madryn for Peninsula Valdez (9h night bus) and south for Perito Moreno for Cueva de los Manos (5h bus).

To get from Esquel to Los Alerces you can take a bus on Wed, Sat and Sunday, I believe. Organized tours to the park are also available, but again, not sure about the schedule, specifically in pre season. Main season is from Jan to Feb. Contact the Esquel tourist office or Siempre Verde Tourist Agency in Esquel for more information.

If you want to or have to hitchhike yourself, it wasn’t all that complicated: Go to the western roundabout (End of Don Bosco Avenue). There is a bus stop. Here, stick out your finger. If you get really lucky, you may get a ride to Los Alerces. I tried for an hour, but failed and then replanned.

Instead hitch a ride direction Trevelin (should take less than 10min from my experience). Get off at the junction for Los Alerces. Every car that passes here goes to the park. And in a worst case situation, you can always take the bus back that runs between Trevelin and Esquel. You should speak a little Spanish, though, to make conversation. In my case it took me literally 1min to hitch the connecting ride after I had made it to the junction.

The park is really large and there are little to no trails. The best collection of Alerces trees can only be reached by boat. In any case, if you want to see a little of the park either bring your own ride (mind the gravel). Or hitchhike some more.

Pictographs: next to Villa Futalaufquen

Andes
Glaciers: visibly shaped by past glaciations and numerous (shrinking) glaciers which continue to exist (AB ev)
Pacific Ring of Fire: highly active Andean Volcanic Belt (AB ev)
Patagonia
On National Border: The nominated property comprises two adjoining protected areas and a 10 km buffer zone of 135,870 ha which surrounds the property except in the west where it adjoins the border with Chile (AB ev)
Cirques