Mammoth Cave National Park holds the longest cave system in the world. Its known passages extend to 365 miles. The limestone caves were carved by the Green River and its tributaries.

The caves were formed over 100 million years ago and the geological process is still continuing. Most types of cave formation can be found here. Some dripstone is present, notably at a site called "Frozen Niagara". Fossils are also distributed throughout the rocks. The endangered Kentucky cave shrimp, a sightless albino shrimp, lives in the caves.

The park derives its name "Mammoth" from its gigantic size, not because mammoths ever lived there.

The caves were beautiful and the park rangers were nice, funny, informative, and very helpful. I took the historical tour and the tour guide knew very much about the history of the caves and was very willing to answer any and all of my questions (no matter how probing.) The caves themselves were phenomenal and I would very happily go back several times again, because there is always more to see in the park. 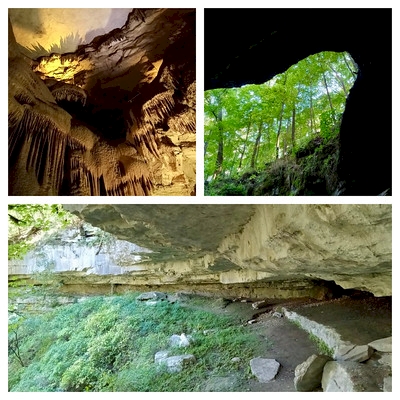 I camped here in 2009. Overall beautiful park both above and below ground. Certainly one of the most impressive caves I've ever seen. There are many different cave excursions you can choose in your tour. Hopefully, I will get another opportunity to see more of the cave tours in the future as 2 is pretty much all you can fit in one day. I drove with friends from Wisconsin to Kentucky. Mammoth Cave was the end site on our trip, and it was very enjoyable touring the caves and camping in the park. Be careful about Racoons though, they want your food! Protect the animals and never feed them or leave food out. 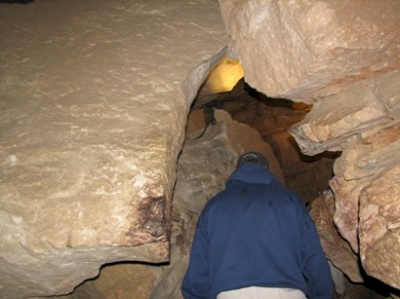 I had stayed overnight in a Bed&Breakfast in nearby Brownsville, so I could have an early start visiting the park. Arriving at 9 am at the visitor center, there still were plenty of tours to choose from. I picked the New Entrance tour, a 2-hour tour that uses a man-made entrance from the 1920s to get into the caves. The fee is 12 US dollars.

Getting in this way is quite strenuous, and not for the faint-hearted or those with a fear of heights. The passages are narrow and of course, it's often dark and slippery. I found much of the talk of the ranger geared to children, of which there were many on the tour, and only mildly interesting.

As I have said in other reviews: I'm not a fan of dripstone, but there a so many sites displaying dripstone on the List that I just have to see them again and again. The most interesting thing I heard or saw on this tour is the story of George Morrison, a local entrepreneur who in the 1920s had blown his own way into the cave system and conducted tours from there. He also built a hotel near this "New Entrance" and posted roadside signs to lure visitors away from the main entrance.

Later that day I did a short hike on the Turnhole Bend Trail. The National Park above ground is a pleasure to be in, certainly on a warm day. This walk took me to an overview of the Green River. Green it looks indeed, a mighty river that was responsible for carving out the cave system millions of years ago.

Mammoth Cave is long, eerie, musty, and mysterious. It is not going to overwhelm you with natural beauty, as you'll find at Carlsbad Caverns. At Mammoth, you'll be amazed by the sheer length of the twisting hallways, and the human history, including people thousands of years ago who ventured many miles into the cave. Their artifacts remain as ghostly reminders. If you have a chance to take the tour including the old TB sanitarium, you'll be reminded of the nice, easy lives so many of us lead today. In the 1840's, these desparate people actually lived down there for a while, in a huge and ugly hall, blackened by candle smoke. They obviously did not find a cure. About the only truly beautiful place on the tourist routes of Mammoth is the Frozen Niagara section, far from the natural entrance but easily accessible by a tour bus ride. The park is gorgeous eastern hardwood forest with many trails. The campground is excellent, too. Mammoth is a place to marvel at nature's miles and miles and miles of tunnels in limestone, and also at the humans who have given it a fascinating recent history.

Dripstone
Significant Karst Features: The karst is developed in Lower Carboniferous(Mississippian) limestone and cave evolution commenced following uplift and exposure 3 to 4 million years ago. (AB ev)
Saltpeter: "Saltpetre deposits were discovered on the cave walls and this valuable nitrate was removed and sent to be processed in gunpowder factories between 1809 and 1819." (AB eval)

Paleo-Indian: "Pre-Columbian Indians of four cultural periods occupied the park and its environs. These peoples - Mississippian, Woodland, Archaic, and Paleo-Indian - hunted in the area that is now the park and lived in cave entrances, beneath rock shelters, and near riverbanks." Nomination File