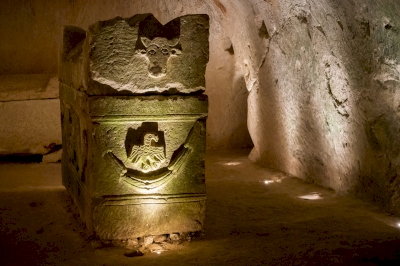 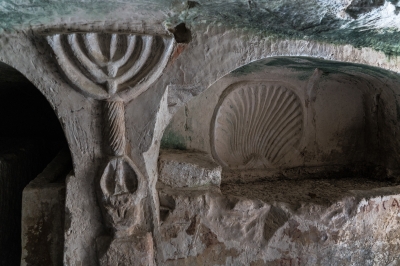 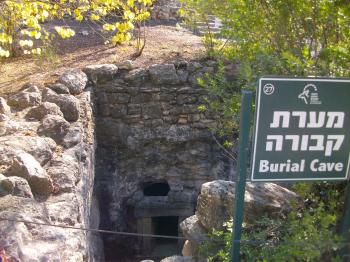 Mosaic art: Mausoleum Cave
Catacombs: a series of man-made catacombs (AB ev)
Necropolises
Cisterns: The Sih cave was used as a water cistern during the British mandate period (AB ev)
Ossuary: "There's plenty of light and height in most of the areas, and temperatures inside are comfortable, making it easy to spend a few hours gazing at the sheer variety of impressive ossuaries, tunnels, inscriptions and symbolic decorations."

Olive presses
Historical Graffiti: Incised and painted inscriptions in Hebrew, Aramaic, Palmyrene, and Greek: "Geographical references in inscriptions on the walls of the catacombs reveal that the necropolis was used by people from the town of Beit She'arim, from elsewhere in Galilee, and even from cities as far away as Palmyra and Tyre." (wiki)
Rock Cut Art: "In one cave, known as the Cave of the Coffins, "the mother of all menorahs" was discovered. It stands more than six feet tall and four feet wide, and is just one of many seven-branched carved stone menorahs found throughout the site. Other carvings in that same cave are taken from the animal world." The "Menorah Caves Compound (...) preserved by special order of the Knesset, contain[s] dozens of depictions of the menorah that became the symbol of the State of Israel."