I went to poverty point in october of 2022, it is extremely out of the way and not near anything. I recommend it as a day trip if you go to new orleans. If you need gas or food the Farmer one stop right by it is something I recommend, it's not gourmet but it's a friendly little spot with a bit of everything. I spent about 4 hours on an archaeological day (highly recommend) there, about an hour and a half to hike the site, 30 minutes in the museum and the rest at the archaleogical day exhibits. Atlatl throwing was my favorite demonstration. I highly recommend the 15 minutes of film the museum offers before you do the hike, it was extremely informative. The Mound A is the highlight of the hike, pictures do not and as far as I'm concerned do not do it justice. It's something that you have to experience in person and it well surpassed my expectations I had for it. It has made me very excited to visit Cahokia soon. 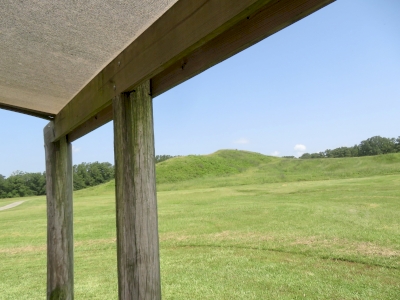 A hunter-fisher-gatherer society of this size would have required a highly skilled group of people to sustain the community. During my visit, there was a Atlatl (spear-thrower) demonstration. After taking two throwing attempts myself, I could appreciate the skill needed to throw with accuracy. Located only 25 km from the Mississippi River, the people who lived here would have relied on extensive trade networks, as the "foreign" stone artifacts in the visitor center demonstrate.

The ICOMOS evaluation of Poverty Point ended with deferral, not because of lack of OUV, but because of Highway 577, which dissects the property and insufficient boundaries. ICOMOS wanted a buffer zone and preferred further research toward expanding the boundaries to include additional associated sites. Viewing the current National Park Service Map, the boundary of Poverty Point includes a Northern component that centers around Motley Mound, which is 2km North of the inscribed area. According to the Advisory Body Evaluation, this area was recommended for land acquisition. Perhaps there will be a minor boundary modification evaluated by ICOMOS in the near future. Regarding Highway 577, the road "visibility" is minor and the speed limit has been reduced. This is (in my view) an example where ICOMOS was probably too scrupulous in their evaluation, but ultimately I am pleased to learn the United States took steps to meet the recommendations after inscription.

The imagining of Poverty Point is perhaps more rewarding then simply standing in front of Mound A. When you see the satellite images, including Google Maps, the OUV of the site is easy to acknowledge. The artifacts in the visitor center help tell this story, but so much remains unknown. We left Vicksburg, Mississippi early in the morning to limit the effects of walking Poverty Point in the sweltering humidity of a Louisiana Summer. After two hours on-site, including a walk from Mound A to Mound B, we felt satisfied with our time learning more about this ancient culture. 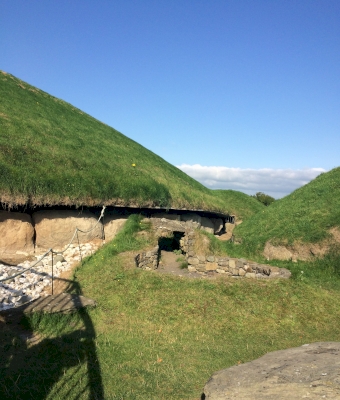 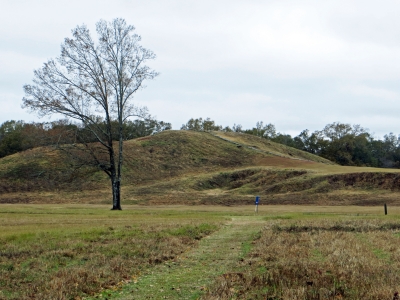 Hunter-gatherers: The complex was created and used for residential and ceremonial purposes by a society of hunter fisher-gatherers between 3700 and 3100 BP. (official description)