The Lakes of Ounianga are 18 connected lakes within the Sahara desert. They are unique as they mantain permanent freshwater in an arid region, being fed by a system of fossil ground water.

The lakes are divided into two groups, 40km apart. They are the remaining part of a much larger lake that existed in this basin 5,000 - 15,000 years ago. The land area in between them is also part of the designated site.

Map of Lakes of Ounianga 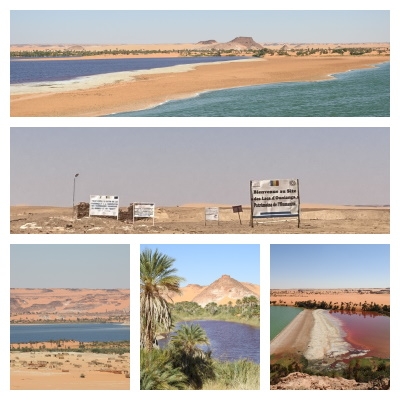 The Lakes of Ounianga are Chad's 'other' World Heritage Site. They lie another day's drive north of the Ennedi Massif, across the pure desert of the Mourdi Depression and not far from the border with Libya. This freshwater lake system is the largest among the hyper-arid desert areas in the world such as the Sahara. Water is supplied from fossil groundwater. It used to be one big lake, but now there are a group of 14 and a group of 4 smaller permanent lakes that are all interconnected. The core zone comprises both groups and the 40km of desert between them.

The first group (Ounianga Serir) has a very peculiar jagged shape, clearly seen on the official map. These lakes include characteristic strips of floating (green) reeds that reduce evaporation. Unfortunately, we were limited to views from a distance after having been chased out of the town by local women waving sticks at us. They may have been angry due to an earlier tourist bathing 'naked' in their lake, or because they don't get a cut from the tourist tax that has to be paid to the often absent local chief. This group has the only lake where swimming is technically possible, the others are too salty.

At the second group, near Ounianga Kebir, we could move around freely (albeit with a minder provided by the police station, keeping his eye out for tourists wanting to photograph local people - a big no-no in Chad). We met local women washing their carpets in the lakes. Some birds including ducks were present as well. Here the colour variety (blue, turquoise, red) depending on the chemical composition of the lakes is seen at its best, often contrasting between neighbouring lakes.

Ounianga Kebir has enough size that it has those ‘freezers’ that you look forward to when travelling in the desert for days. These big, white things are usually kept outside in front of shops, and they are full of cold soft drinks in a surprisingly great variety (Coke – Sprite – Fanta – Chinese mango juice – local cola – alcohol-free malt drinks etc.). In town, customs for the Libyan border are also taken care of. Just outside town, at what looks like a random spot, a WHS sign can be found that says "Bienvenue au Site des Lacs d’Ounianga, Patrimoine de l’Humanité" and sports the UNESCO WH logo.

In between the two towns, and not to be missed, lies the oasis lake of Molotrow (also known as "Motro", names around here vary from what's in the official documents). Surrounded by palm trees, it delivers a postcard view from the opposite hill. Its water is reddish as well.

People in Ounianga traditionally live from the produce of date palms and salt, but in recent years many men have taken up jobs in the gold mines of Libya. Especially the salt trade seems like a dying tradition, and the date harvest is seasonal. We visited a lovely seasonally abandoned oasis town called “Teguedei” (meaning: ‘lots of’ mosquitos). It lies just outside of the Ounianga core zone, but it is hydrologically connected. Here big stone storage jars for the dates can be seen as well as another pretty lake and heaps of salt. Wilfred Thesiger also has described the wider Ounianga region lovingly in his A Camel Journey to Tibesti - an essay worth reading before you visit, as despite its 1939 publication date it still is pretty spot on.

we visited this site in 2000 with a 4x4 tour from Ndjamena. On the first day you cross the Djourab Erg (wich is on the tentative list for some very important hominid sites like Toros Menalla and Koro-Toro) on the second day the car, after an interesting stop in the big oasis of Faya Largeau, has to cross mines fields from the time of libyan invasion between relics of abandoned trucks and tanks. The Ounianga lakes and their surroundings offer an incredible lanscape, one of the best you can find in the Sahara. The people of the nearby villages (Tubu) approach the car but, strange for Africa, stay at a distance and lay thieir artefacts on the ground. After a long trip in the sand the cristal waters of the lakes invite you for a refreshing bath but the water is unbelively cold. The tour goes back to Ndjamena with a two or more days stop in Ennedi (another site on the tentative list for the stunning petroglyphs). Here you can also visit the impressive Archei Gorge where some Nile Crocodiles which were trapped there long time ago by the draining of Bahar El-Ghazal still survive.