The "Buddhist Ruins of Takht-i-Bahi and Neighbouring City Remains at Sahr-i-Bahlol" are remains of a famous Buddhist monastery and a fortified city.

It consists of numerous chapels and stupas sticking to the high, rocky spurs. They date from the 1st century CE. The complex is regarded by archaeologists as being particularly representative of the architecture of Buddhist monastic centers from its era.

Takht means "throne" and bahi, "water" or "spring" in Persian/Urdu. The monastic complex was called Takht-i-Bahi because it was built atop a hill and also adjacent to a stream.

Takht-I-Bahi was unearthed in the early 20th century. Much of the friezes and statuary were removed between 1907 and 1913. 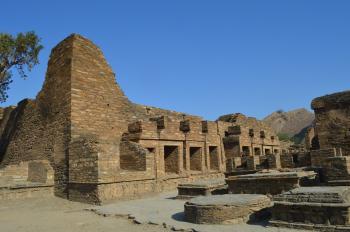 I left Islamabad early on a December 2017 morning on the Grand Trunk Road to Taxila, an hour to the northwest, to visit the WHS's ruined second-century Buddhist monastery. From Taxila, it was a two-hour drive to Takht-i-Bahi, another Buddhist monastery, which was abandoned in the seventh century. From Takht-i-Bahi, it was less than an hour to Peshawar, where I arrived just in time for Friday prayers at the 17th-century Mahabat Khan Mosque. The mosque is located down one of the many narrow passageways in Qissa Khawani Bazaar, where the friendly vendors were surprised to see an overseas customer. In fact, I didn't seen any other foreign visitors in the heavily fortified and militarized city, maybe because it's less than 40 miles from the border with Afghanistan. 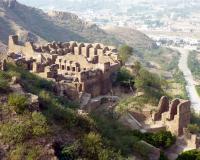 Takht-i-Bahi was the furthest into the state of Khyber-Pakhtunkhwa (formerly North West Frontier Province) we ventured during our trip to Pakistan. We made a full day return trip by road from Islamabad rather then overnighting in the much closer Peshawar (c80 kms) as, in Nov 2013, the UK Foreign Office was warning against travel to that city and that would have invalidated our insurance if we had gone there. So we only went within 50 kms of there as we passed through the city of Mardan which itself was in the news in Sept 2012 for the arson of its Lutheran Church during riots over the showing of the movie “Innocence of Muslims” in the USA. (Exactly 1 year later in late Sept 2013, suicide bombers killed 127 people in Peshawar when they blew up a church there specifically targeting the Christian population).

The site is just 15kms beyond up a series of back streets from the town of Takhat bhai with a “grand” road built to cover just the last 200 metres. The Chowkidar joins us as “guide” – even though we have our own and we are also assigned a policeman with machine gun to escort/protect us. So that’s 2 more people to “tip”! We ask how many foreigners visit and they say only a handful each month – mainly Japanese apparently – presumably because of the Buddhist aspects.

The site lies along a track which climbs 160 metres or so above the car park. And, at the top, one finds a complex of buildings known as a “Sangharama” (“Sangha” being the community of Buddhist monks). A significant aspect to grasp is that, during the Buddhist period of the Gandhara Kingdom to which Takht-i-bahi belongs (c2nd C BCE to c 7th C CE), the area of what is now NW Pakistan and SW Afghanistan contained significant numbers (I have read of “thousands”) of such complexes. Indeed Taxila, which we were to see the following day has at least 3 – Dharamajika, Jaulian and Mohra Moradu. Further, the Takht-i-bahi inscription also includes what is described as “the Neighbouring city remains at Sahr-i-Bahlol” and these too included yet another “Sangharama”. To my regret we failed to visit it as I forgot to remind our guide as we passed nearby – he knew, but obviously didn’t think it worth bothering!! Interestingly it isn’t even mentioned in the AB evaluation of Takht-i-Bahi (or in the evaluation’s title) but, in the record of the WHC decision, the site title has been amended to include it. And neither does it receive a mention in the “Periodic Reporting” of 23 years later, other than in the site title! I believe that there is nothing to see, but that site did yield many significant stone-carved Gandharan sculptures during excavations around 1912 by Sir Aurel Stein of Mogao fame. These are on show in museums such as that in Peshawar – which of course we also failed to visit! Taxila on the other hand is more famed for its stucco art.

All such Sangharamas contain one or more

a. Stupa complexes containing a single main stupa plus a number of smaller stupas arranged in a courtyard

b. Viharas where monks resided, meditated, cooked and ate etc

Among the complexes at Taxila, that of Jaulian is particularly similar to Takht-i-bahi in terms of its location and lay-out, being situated on a hill side. Apparently the larger Sangharamas were deliberately located a “convenient distance” away from urban centres in secluded locations with hills/forests and running water so that the “religious life” could take place there but not totally cut off from the lay Buddhist population – I guess that places like Laos, Myanmar etc provide the nearest comparison in today’s terms. Regarding relative timescales, the Taxila complex of Dharamajika is the earliest, going back to Ashoka and the 3rd C BCE. Takht-i-bahi was founded from 1st C BCE - although it is said to have earlier Zoroastrian roots, there didn’t seem to be anything “on show” to demonstrate this. Jaulian dates from around the 2nd C CE. Both Dharamjika and Jaulian were destroyed by the “White Huns” in 455. Takht-i-bahi avoided this fate and “prayed on” for another 200 years or so and the last dated construction is from the 7th C CE – this avoidance of destruction was important for preserving the remains on view today. It is said that it escaped the depredations of the Huns because it was off the main road from Swat and “hidden”! The AB evaluation also says “if fell into disuse through the discontinuation of charitable endowments in modern times” without specifying what it meant by “modern times”. In fact it seems an inappropriate word - the Chinese traveller Xuanzang reported the decline of Buddhism in the area in 644. The remnants of Gandhara thereafter, under various conquests, reverted significantly to Hinduism and, in around 1020, became Islamic.

The remains at Takht-i-bahi lack almost totally the in-situ artistic remains of Jaulian (as at Sahr-i-Bhalol, such as had survived were removed during excavations). The courtyards and monk’s cells are well preserved (with a degree of reconstruction by the Archaeological Survey of India shown by marked mortar lines and dates on stones) but the many niches are largely empty of statues. There is one caged area containing the base of 3 stupas and some fragments of statues but the main “glory” of Takht-i-Bahi is its situation and the relative completeness of its layout. It is well worth climbing beyond the main complex to a higher ridge and look down on the entire complex (photo) – from there you will also see another area of ruined buildings on an adjacent ridge which we were told were monks cells. One area of interest in the main area is what is called the “Tantric monastic complex”. This consists of a series of “dark cells with low openings for mystical meditation, in keeping with Tantric practice” (AB) – our Chowkidar opened up the passageway down to the low courtyard into which the cells open out for us to enter them (The local visitors were not granted this “privilege”!). But we didn’t really receive any further information about this aspect of the site. The Sangharamas of Gandhara all followed the Mahayana strand of Buddhism. It appears that Tantric Buddhism is a later development/“specialisation” of this and emphasised a kind of meditation which owed much to Hindu practices. As such these structures must relate to the very last period of Takht-i-bahi’s active existence – possibly as late as 6th/7th C CE – ie after the Hunnish invasions and the reassertion of Indian based rule. Perhaps some “expert” on Buddhism can comment further in the Forum?

On reflection I am pleased that we visited Takht-i-bahi before the Buddhist complexes at Taxila. Those latter provided more detail to see but were less spectacular in location – they benefited therefore from the background we had picked up from Tahkt-i-bahi. It is also perhaps worth mentioning that the fabric of the site seemed reasonably well maintained (though the same couldn’t be said of the visitors’ toilets at the bottom!) A number of the walls were being held (near) vertical by steel stanchions which, rather fetchingly, had wrought steel UNESCO WHS logo designs welded to them. A real labour of love by somebody!

(Since anyone going to Tahkt-i-bahi is going to pass through Mardan the following report on a sight there might be of interest. We stopped off for tea and a quick look round to follow up on another of our “lists” – “Memorials of Empire”! Mardan was the HQ of the “Guides Corps”, the first British regiment to cease wearing Red Tunics and adopt “Khaki” (= Dusty) and still has an arched memorial to Governor Sir Pierre Cavagnari and his escort of “Guides” who were “massacred” in a siege at the British embassy in Kabul during the 2nd Afghan War. I say “massacred” but in fact the score was “British” dead – 72 (the entire company, of whom 68 were Indian soldiers!) Afghan dead – 600).

I visited the ruins at Takht-e-Bai in 1968 when I was 21 years old and in the USAFSS stationed in Peshawar Pakistan (the same base Gary Powers departed on his ill-fated U-2 flight over Russia in 1960). Takht-e-Bai is one of my fondest memories and and unforgettable experience. Would love to visit it again, but times are not so friendly there now.

A study of Takht-i-Bahi

The Treasures of Takht-i-Bahi

Silk Roads: (Near) Southern Land Route; in ICOMOS thematic study but no details on role or function

Built in the 1st century BC: founded in the early 1st Century BC