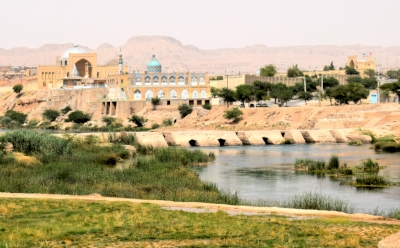 After the rather lifeless sites of Susa and Tchogah Zanbil which we explored under the scorching summer heat of 2017, Shushtar's watermills and waterfalls delivered a most refreshing sight. No other visitors while we were there, so we enjoyed it very much. Water pressure was not at its best, but it was still okay. The presence of some waterfowls was also a delight especially for bird lovers like us. Two adjacent components of this WHS are the Gargar canal and Gargar bridge-dam. A section of the Karun river -- believed to be one of the four rivers of the Garden of Eden -- is part of the inscribed area and it is lined by the Band-e Mizan (in photo), Farangi tower, and Salasel castle. The river is eventually crossed by the ruins of impressively long Band-e Kaiser to the west (another interesting ancient Roman bridge in the region is Dezful bridge, the oldest functioning bridge in the world). I explored Salasel castle on my own and I was surprised to see that no one was manning the ruins at all, considering that it is the "most important" component of the entire water management system. Salasel hardly looks like a castle now, but the promontory offers great views of the river. Taking the advice of the previous review, we no longer took the effort in seeing the other components.

Iran is far from being short of exemplary sites displaying mastery of water use and water control. It also has the qanats and the Persian gardens. Of the three, however, Shushtar's is my favourite and is perhaps one of the best the country has to offer in my opinion. I guess a large part of my appreciation stems from the fact that Khuzestan province is such a dry, oppressively hot place! 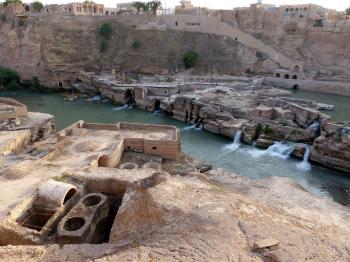 UNESCO has demanded that Iran explain the situation following the collapse of a portion of the Gargar Bridge at the Shushtar's ancient water system (2011.04.26)

Sassanid Empire
Silk Roads: (Near) Classic Land Route; in ICOMOS thematic study but no details on role or function