The Maya Site of Copán in western Honduras is best known for the number and artistic quality of its remaining stelae, sculptures, and altars.

Copán was a political, civil, and religious centre for the southeast of the Maya area. It was one of the most important sites of the Mayan civilization during the Classic era (5th century - 9th century AD). The site was abandoned shortly after 900.

The main complex consists of the Acropolis and five plazas, with ball courts, temples, and altar complexes. The highlight is the inscription on the Hieroglyphic Stairway, the longest known Maya hieroglyphic text which describes the most important rulers in the dynastic history of the site. 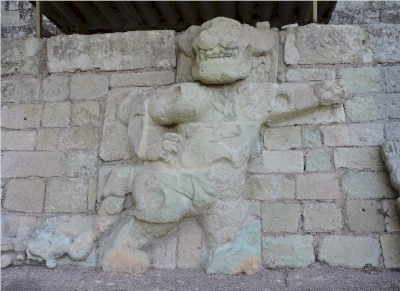 With my brother’s wife being from Honduras, it was a certainty we would have to visit the country during our Central America trip in the summer of 2016.

Like others, we crossed into Honduras from Guatemala at the El Florido crossing (our driver’s taking of various other border crossings between Guatemala and El Salvador raised some eyebrows elsewhere) and overnighted in Copan Ruinas at the Hotel Magdalena. A five minute drive early in the morning brought us to the wooded trail to the ruins, the colours of the macaws flashing between the trees.

Our driver arranged a tour guide. When looking back on our travels, my wife will often go straight to remembering a random detail. “What do you remember about Copan?” “The tour guide had a stick with a macaw feather on it. And it was so hot!” Indeed, the various shady areas around the ruins are very welcome in that respect, compared to us almost getting incinerated at Chichen Itza!

Visiting in the morning, there were very few other people there - my photos are clear of other tourists unlike similar sites in Mexico for example. The guide showed us a 3d model of the complex at the museum / visitor centre first, which gave a good overview of the components we would later see - the Eastern Plaza, the Plaza los Jaguares with it’s dancing jaguars (pictured), the Plaza Principal, the Acropolis, the highly prized Hieroglyphic Stairway and my personal favourite, the Ball Court. It was very useful to have a guide explain the various carvings on the numerous stelae dotting the site.

I haven’t yet been to Tikal, Palenque or Calakmul, so cannot compare there. It’s not as obviously monumental as Chichen Itza or the non-Mayan site of Teotihuacan. Yet Copan was just as enjoyable as both of those. Having said that, perhaps these things depend on the order in which you visit the sites. Copan was at the point the most important Mayan site we had visited, so perhaps that leads to a higher rating?! But the setting, the “new country” factor, the quality of ruins and their obvious universal value all lead to a memorable experience. 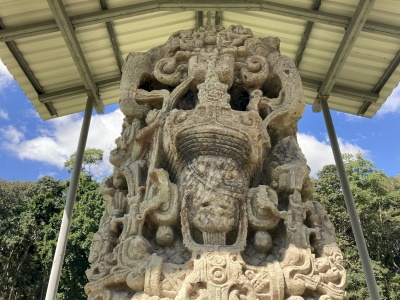 When I arrived at the archaeological site of Copán at 8.15 am, a man was still busy removing the rain coverings from the statues. I had to wait for him a few times when I did my circuit. The many sculptures, statues, and stelae are the highlights of this site, so it’s worth waiting for.

There is a main trail through the forest to guide you around the site. Very little is fenced off: you are free to take side paths, climb the old stairs and discover what lies on the other side of those stones. It was still quiet of course this early in the day, and this freedom of movement only makes it easier to avoid people.

The first monumental complex you encounter is the Square of the Jaguars. From here, tunnels (closed to the public) led to the rest of the city. By climbing over a pretty ruin twisted by tree roots, you get your first look at the main plaza. Here lies the famous hieroglyphic staircase as well as the ball game court. Many stelae and other statues are dotted around the open areas. Those under shelter are originals, those without are replicas. It's a fine place to wander around or find a nice spot to sit down. You’ll hear birds (macaws) screaming at you all the time from a corner of the plaza, where they are fed.

A side path from this main plaza will lead you to Núñez Chinchilla. This is a residential area that has been excavated by a Japanese university since 2018. Tombs and monoliths of a type not seen elsewhere in Copán have been found. The other more remote component, Las Sepulturas, unfortunately was closed during my visit.

Outside of the main grounds lies the Sculpture Museum of Copán, where the most fragile sculptures have been stored, replacing the originals with replicas on the spot. It is a large building, specially made for the recreated Rosalila temple in the center area. This one is covered in red stucco, as the temples must have looked like in the past. It's just another reminder that the stony gray of ruins isn't what it used to be. The rest of the museum I found a bit disappointing, it's a shame that the findings can no longer be seen in their original spots.

In all, I spent about two hours at the ruins and half an hour at the museum. It was a nice feeling to walk among the ruins of a classical Mayan city again. Copán is not the most beautiful among the Mayan ruins, and its jungle is not as impressive as in Calakmul or Tikal. Nevertheless, it was a city of great importance and much of it can still be admired. The many statues make it similar to an Asian temple complex, a satellite city of Angkor for example. 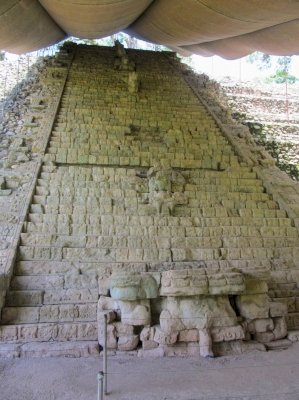 Honduras has a reputation that is enough to scare off most visitors from making a lengthy visit. Fortunately Copan Ruinas is very close to the Guatemalan border and is easily reached from there both independently or by tour/tourist shuttle. There are several sections to this site including the museum and tunnels and with all the separate fees it is one of the more expensive Mayan WHS to see.

We covered the most central parts and didn't make it out to the Sepulturas section and it still took us a couple hours. Compared to other Mayan ruins what really sets this one apart is the quality and quantity of stele and carved detail, especially in the hieroglyphic staircase. It was nice to visit without huge crowds and still be able to climb over large sections. The huge trees still growing out of the rubble make for some great photos too.

The nearby bird park has also been reintroducing Scarlet macaws to the area and there were a couple dozen hanging around near the entrance. They are beautiful birds and it's not surprising that the Mayans of Copan used a lot of macaw imagery in their hieroglyphics and decor throughout the site too. I only give it 4 stars though because a full visit to the site is overpriced for the region.

I visited the ruins at Copan on February 18, 2009 and stayed in the nearby village of Copan Ruinas, which lies only a 1km walk away along a specially paved walkway. On the walk, you'll pass several still unexcavated mounds and a sculpture or two. You can also take a taxi,which are really three wheeled pickups, for about $0.60.

Unlike the Mayan ruins at Chichen, Coba and, as noted in the previous post, Tikal these ruins do not cover a wide area but what they do offer are many intricately carved stele or stone columns celebrating the accomplishments of several of the Mayan rulers of the city. These stele, most of them on a central plaza, inspired the noted archeologist Linda Schele to describe the site as "A Forest of Kings." Unfortunately two or three of the most beautiful stelae and sacrificial altars are represented by reproductions, the originals having been moved to the nearby museum. Entrance to the ruins, the museum and recently dug tunnels under the so-called "Acropolis" are separate. Currently it's $15 for this site (and Las Sepulturas), $7 for the museum and $12 for the tunnels for non-residents For most visitors the ruins alone would be enough, the museum is optional and the tunnels are interesting but not, in my opinion, worth the steep price. Plan on spending at least 3 hours at the site; guides are available and well informed. There are several nature trails also on the site A visit to the smaller "Sepulturas' site, 2km away along a special path that parallels the highway so you don't have to worry about being run over, is worthwhile if only to see the residential area and get an idea of daily life among the Maya as opposed to the ceremonial. Make that decision based on time, interest in Mayan ruins and history as well as the heat of the day. There are no refreshments available at that site or along the path so bring water if you go.

Depending on your schedule and travel plans you should consider staying over in Copan Ruinas. Although the town is geared to tourism, with its souvenir and "craft shops" it retains a charm and laid back style in a beautiful setting. A stroll and dinner in the cool of the evening is certainly worthwhile and there is frequent bus service to other cities in Honduras as well as back to Guatemala.

Honduras has its merits as a tourist destination but lacks the appeal of Guatemala with its indigenous peoples, historic sites and scenic variety. However, if you are basing a self drive holiday on Guatemala you can still easily visit one of Honduras’s 2 WHS at Copan since it lies very close to the Guatemalan border. We started from the motel (recommended) at Rio Hondo, crossed at El Florido and left our car at the border post as it is not worth the costs of taking it across the border (even if your rental company/insurance will allow it). Next pay the personal exit/entry charges for each country (you will need to pay some of them again on the return but not too excessive! Tell the both sets of authorities that you are only going to the ruins and thus avoid the need for a Honduran visa and make it easier to get back to Guatemala), change $ for a few lempira at the border and take a truck/minibus the 14kms to the Honduran village of Copan Ruinas (they go when full but pretty frequent). From there it is only a couple of kms to the ruins (many buses). Check the border closing times for your return before you set off as the countries don’t operate to the same timetable! It all sounds quite complicated but we really found it very easy.

Copan as a destination does not, in my opinion, rival Tikal – one could easily spend 2 days wandering around that site - but is well worth the day of your time it will take to make the detour required to cross the border and spend the half day it warrants even for a non-specialist in Mayan ruins! Like Quirugua, the nearby WHS in Guatemala, the star attractions of Copan are the stelae but far more of the city is visible/preserved as well. My photo shows a ball court and Copan’s most famous monument, the Hieroglyphic Stairway (protected under an awning).

Liquid Mercury: "a cache associated with the Margarita South Offering Platform at Copan in 1993, which produced a large quantity of liquid mercury. The stone “box” had, among other items, a large lidded ceramic bowl containing the remains of a turkey. Everything was very very heavily burned (blackened), and I believe that quantities of cinnabar were included in the deposit, transformed to liquid mercury in a reduction environment. Yellowish stains (not tested) suggest sulfur-rich products, the leftover component of cinnabar’s decomposition". See

Mayan culture: "The Maya site of Copan represents one of the most spectacular achievements of the Classic Maya Period" (Crit iv OUV)