The Historic Centre of Camagüey has an unusual radius-concentric urban model.

The nucleus is the Plaza Mayor, from where numerous churches and convents can be found in equidistant positions to the four winds. Most of Camagüey’s churches are the result of the city’s prosperity in the 18th century, when so many new ones were built that it got the nickname “City of Churches”.

The city’s domestic architecture is reminiscent of Andalusia. Clay is used as the main construction product, both in buildings and in the large earthenware jars that were used for storing water. Houses are generally low, having one floor only. The streets are narrow, opened up by 7 large squares and 13 smaller ones. 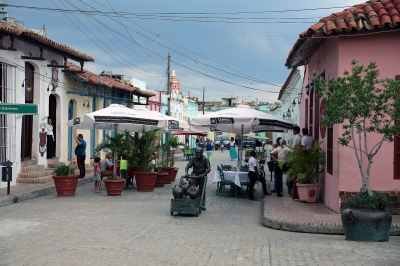 There is in fact several squares dominated by a church or colonial building and connected by narrow streets. Our most favorite was Plaza del Carmen with lovely sculptures of locals doing everyday staff, like carrying famous clay pots or reading newspapers. It is also place for excellent Martha Jimenez Perez gallery. She is one of the most famous contemporaneous Cuban painter. We even purchased beautiful sketch for 80 CUCs.

In overall, decent city with its pluses and minuses, not star attraction, probably deserving WHS status.

I visited Camaguey in April 2011. Normally I love the cuban people, but I found them overwhelming as they hounded me in the city limits.

The preserved old town is beautiful, but surrounded by the slums characteristic of a third-world city. The streets are very narrow and seemed very difficult to navigate (I was not driving).

Am I glad I went? Yes. Am I glad I paid for a tour instead of trying to make my way through the city myself? definitely. Would I revisit the city? Probably not. That said, the province of Camaguey itself is beautiful. 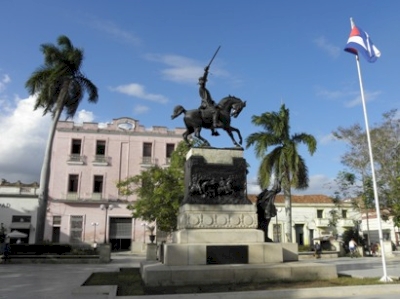 The Camaguey nomination file has the length of a Fidel Castro average speech. Every ice cream parlour is named. This is not helped by an El Cheapo translation into English of the file. Why this has become a WHS is a mystery, and it remained that way after I had visited the place.

It’s not an unfriendly city though. It probably has more “normal” city life than the average Cuban town: a large shopping street, terraces on the main square. Lots of churches too. It is definitely pleasant to walk around for an hour or two, exploring the many little and larger squares. But that’s about it.

The nomination draws heavily on Camagüeys Andalucian touches, but you’ll need a lot of imagination to see this parallel. The large clay jars I only saw deliberately placed on the town’s tourist trail: in the former convent/museum and next to the main church.

The works to turn Calle Maceo into a boulevard, a project included in the Management Plan for the area declared World Heritage Site, will start next March 1st in Camag (2010.03.02)

Art Nouveau
Art Deco: "The stylistics influences arriving in the city at different stages of its evolution can be identified – such as Eclecticism, Neoclassicism, Art Deco" (AB ev)
Neoclassical architecture
Mudejar style: "The constructive techniques that they shows and the use of the clay, the third and the lime to reproduce the ornamental elements, design and formal expression that characterize the built repertoire of the property, reflect the notorious Mudejar influences" and "The Mudejar framework of the roofs with braces, angle braces and bowses" (nom file)

Destroyed by Hurricanes or Typhoons: Ike

History of Aviation: "An event of worldwide connotation was the Camagüey Sevilla flight, made by the Spanishes Mariano Barberán y Joaquin Collar in 1933. They flew the airplane so called 'Cuatro vientos'.."(nom file). It was the longest Atlantic Ocean crossing until then. The plane disappeared when continuing from Camaguey to Mexico.

Piracy: "After almost continuous attacks from pirates the original city (founded as Santa Maria del Puerto del Principe around 1515 on the northern coast) was moved inland in 1528" (wiki)

Built or owned by Spanish: One of the first seven villages founded by the Spaniards in Cuba (AB ev)