The Richtersveld Community Conservancy is a mountainous desert in the north-west part of South Africa.

It sustains the semi-nomadic pastoral livelihood of the Nama people. The Nama are descendants of the Khoi-Khoi, considered as the indigenous inhabitants of southern Africa.

The site includes the seasonal migrations and grazing grounds, stockposts (kraals) and haru oms, the portable houses of the Nama. 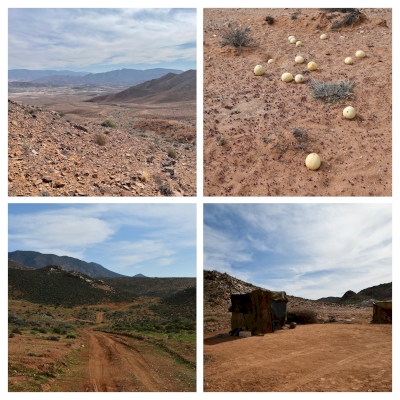 This site defines why I’m in this “game”! Totally remote and so different from my home environment! It’s the feeling of being on another planet! It’s just awesome!

Richtersveld is the most remote corner of South Africa, bordering probably the most remote corner of Namibia. From any direction it’s a long drive. Coming from the Kgalagadi Transfrontier Park we chose to approach Richtersveld Transfrontier Park through Namibia visiting Fish River Canyon on the way. We had decided to spend some time in the Sendelingsdrift Rest Camp, but as we hadn’t booked anything upfront, we planned to do it along the way. That was a good idea if it hadn’t been for the fact that our South African sim card didn’t work in Namibia nor in Kgalagadi. Anyway, we planned to arrive early and could do the booking in the camp reception, but there were some “obstacles”. Southbound in Namibia we had to buy food for two nights in a self-service camp, a stop in Aussenkehr was necessary (it’s just half an hour north of the river crossing ay Vioolsdrift). From there we followed the C13 road along the border on the Namibian side to the border crossing at Sendelingsdrift. A small cable ferry would take us across the Oranje river. The border post just 100 metres from the river was deserted! Strange, but we continued to the river finding the ferry on the other side. This place was totally deserted too. After waiting half an hour, we got in shouting contact with a man on the other side who could inform us that this crossing was closed due to covid. The two option we had was to go back east to Vioolsdrift or further west to Alexander Bay and cross the river by Oranjemund. We chose Alexander Bay and after 1 hour and 15 min on a paved road we crossed the border but going back to Sendelingsdrift on the South African side was on an unpaved road. The result was that we arrived at the camp gate (8 km from the camp itself) at 17:40, the camp reception had been closed for ten minutes already! It was a kind of crisis, no one wanted to stay the night in the car in this desert and the nearest hotel was “nowhere” 😐
Although there were no officially existing telephone service the nice park gate personnel solved it by calling someone (after waiting for the continuously disappearing telephone service) who was willing to meet us at the reception after hours. So, we got a cabin after all! This was the near-miss experience, luckily the only one we had on our African journey.

The next morning the receptionist informed us our possibilities in this park. Having a vehicle that could go anywhere we practically could go anywhere, but we paid attention to their advice. This first day we would spend in the buffer zone of The Richtersveld Cultural and Botanical Landscape and the next in the core zone. This day in the buffer zone turned out to be strenuous but fantastic! The roads – sorry no roads – just tracks, was from good to exhausting, but visiting fantastic areas inside this park is just awesome! We met no more than two-three 4x4 campers the whole day, most of the time we in total solitude (or duality 😊). It’s impossible to describe the different places, they all look alike in this desert (or semi-desert) but indeed – they all are different! Driving in dry sandy riverbeds to steep gorges and hills, all rocky or sandy. Along the Oranje River there are green vegetation (and a camping area – where we met a couple of campers) but away from the river its very sparse vegetation. Surprisingly we also met a few animals, like sprinbooks. Going up to higher grounds gives a superb panorama and (although it seems the be a worn expression) makes you humble.
Back “home” in our cabin just before dark we experienced “total darkness”! The cabin had no electric power! Lights we could do without, but we couldn’t prepare our dinner! The person in nearby kiosk (selling mostly sweets, but other necessities as well) was still open, even in the dark, could tell us that this was part of the energy saving program in South Africa. The power will be back at 8:30 p.m. That was a relief 😐

Having read those other reviewers starting their visit from Vioolsdrift our approach to the core zone was the total opposite. From Sendelingsdrift we drove south to the World Heritage area. The information we had gathered told us that the northern part of this site has little to offer, so we headed to the southern part along the site’s western border but just outside it.

Two hours later we found ourselves I Eksteensfortein, a rather small town which has a visitor centre and an entrance to this WHS core zone. The unoccupied lady at the desk smiled to us when she found out that we were Norwegians! She had been to Norway an Alta for the preparation of making this site a WHS!
The visitors log had three entries since May making this a not very busy site and she said, you will probably meet no one in there.

We had decided for an incomplete roundtrip in this conservation area. The first stretch was northbound, and the tracks was quickly fading making it hard to continue in the correct direction. We missed a right turn after 10-12 km and went uphill and into the “wilderness”. It was a plateau with no exit. Going back, we found the turn eastbound. It’s off-road driving with scarcely visible tracks but mostly flat and easy driving, even though there are high hills surrounding the area. In a distance we could see something that looked like small houses, so we make a detour. Closing in we see some poor cabins with fabric roofs. We’re not sure if these are the houses of the Nama people, but it was the closest we could find.

Eventually we arrived at Rooiberg which has a visitor centre and a guest house inside the core zone, both totally deserted. We also found ourselves on the inside of a locked gate! I guess we used “the back entrance” (but the gate could easily be opened).
In the hills above Rooiberg there are supposedly halfman-trees. We really made an effort trying to find some of them but regrettably we failed. We even hiked in this area which is home to spiders, snakes, and scorpions (mind the yellow ones, they are deadly), but we saw none.

Outside the gate we visited a San people burial site.

Heading back south then east we soon were outside the core zone and back in the buffer zone. Here the tracks roughen, and we pass through Helskloof. By now this kind of driving is really joyful. On this stretch we find the rock art. Going back to “the civilisation” along the Oranje River to Vioolsdrift is rather boring.

Although I top rate this WHS for myself I rate slightly lower “officially”. My personal experience by getting here doesn’t justify top rating. The difficulty of finding the cultural part makes a slight downside to it. 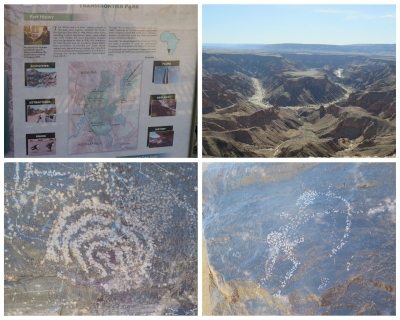 To visit the park I stayed at the Vioolsdrift Lodge just across the border from Namibia. At the time it was run by a lovely family so I highly recommend it, great tents and a bar where you wouldn't expect one. The lady (formerly German I believe) also gave me superb info on the park and since I had a 4x4 on the trip I could access the park from a little road that goes northwest along the river. What you see are some low cliffs but the road is very shoddy, with big spiky rocks all over the place. It gets rougher as you go along. This may not be the main path into the park. It takes quite a while to get into the park and then it's still a while to see more things that you are looking for. Unfortunately this is like a huge "open museum" and the things you are looking for could be anywhere in the park without a guide. So my advice: book something from Cape Town if you want the full cultural experience. Going in on your own is mainly just for rock art and some remains of old houses.

However, I think the ǀAi-ǀAis/Richtersveld Transfrontier Park has the same cultural relics and MUCH better scenery. I've included a pic of Fish Canyon, a true marvel, and you can hike in it too. The access is better, there are more things to see, and it's more beautiful. Currently on Namibia's tentative list for natural whereas Richtersveld is unfortunately not listed as natural and got the natural part rejected for inscription, so the transborder extension may be a little tricky to achieve. Still though, unless you are a die-hard "I must visit the core zone" WHS enthusiast then I would suggest you just visit Namibia. 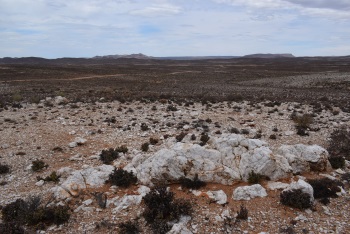 I find it very flattering to be the first one to make a review for Richtersveld. I still wonder why it was not listed as a mixed site (cultural and natural) considering the unique biodiversity and way of floral survival that exist in that region. My friend and I went through Vioolsdrif, near the border to Namibia, where we spent two nights to tick this site off, to get to the core zone. After going through the mountains,and passing through numerous massive rocks with 4,000 yo ancient Nama carvings (as shown in the page's photo above), the landscape dramatically changes to the world of the succulents - actually, upon entering Northern Cape region, the fynbos ecosystem loses presence. On the site, it constantly made me wonder how the plants there survive knowing how little rain the place gets, let alone how it can continually support pastoral activities for thousands of years already. We visited various quartz fields (see photo with this review) where the most bizzare plants grow (the halfmansboom being the most iconic), as well as a goat pen and a water well made by the locals. In our 7 hours stay in that part of Richtersveld, we never saw any other tourists around, making the experience truly memorable for us. I also felt I earned some bragging rights in going here when our guide explained to us that there are only around 400-600 tourists who visit the site every year, as most would rather go to the white water rafting on the Orange river nearby; which serves the site's preservation better, in hindsight. At the end of the day, we saw more of the botanical aspect of the site than the cultural, but it was totally worth it.

The Richtersveld Cultural and Botanical Landscape

The story behind how South Africa got Richtersveld included as a cultural WHS (2007.07.01)

The Richtersveld in the Northern Cape has been awarded world heritage status. (2007.07.01)

On National Border: On Namibia border

Minority communities: Nama people continue to live and graze their livestock in the area
Customary ownership: The Richtersveld Conservancy is owned by the local community through a Community Property Association (AB ev)
Largest cultural WHS: 160,000 ha

Cultural sites rejected for Natural criteria: In 2007 S Africa asked for inscription under natural criteria ix and x as well as cultural iv and v but this aspect was deferred as IUCN was concerned that the site wasn't large enough to meet the conditions of integrity and biodiversity