The Socotra Archipelago covers an isolated group of islands and coastal areas that are known for their plant biodiversity.

They are located at a 'cross-roads' of the Arabian Sea, Red Sea an Indian Ocean. Its long isolation has led to the preservation of an ecosystem that has disappeared elsewhere. Combined with its climate, characterized by fierce heat and drought and a short monsoon season, Socotra has survived as a pristine, unique and spectacular endemic environment. The smaller islands in the archipelago even have their own endemism. 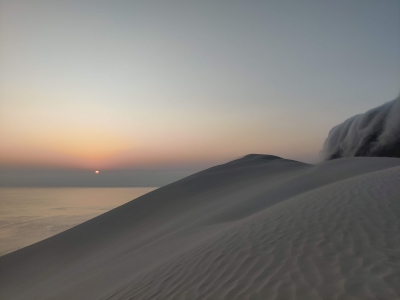 Socotra is filled with stunning landscapes.  The forest of iconic dragon blood trees on the Diksam plateau is truly unique in the world, and one of the main draws here, but there is so much more.  My first night, we camped between the amazing dunes of Arher beach and the ocean.  This has to be one of the most amazing campsites I have ever stayed at.  White sand dunes climb up to 200 meters along the face of towering 600+ meter cliffs. Besides the dragon blood trees, which never get old, there are also thousands of fuchsia-flowering bottle trees and a few frankincense trees to watch for.  There is great rugged hiking, such as into the Kalissan canyon where you can then cool off in emerald colored fresh water pools between gently eroded white limestone rocks. The white sand beach beside Detwah lagoon and near Qalansiya at the far northwest of the island is probably one of the most beautiful beaches in the world without any sort of hotel on it. Besides the handful of more famous beaches that are commonly visited by the small tour groups, there are literally miles of gorgeous white sand beaches that are practically untouched.

I visited in April 2022, and at this time, there is exactly one flight per week from Abu Dhabi, and you have to book an organized tour to visit. This makes it rather expensive, and just the Yemen visa, obtained through the UAE, costs $US 170. Our tour camped for all seven nights. While camping in the hot sun and sand was a little tiring, I have to say it is the best way to experience the island.  For slightly cooler temperatures, but to still catch the bottle trees in flower, come a little earlier, like in early March.

There isn't a lot of tourist infrastructure on the island, and that is part of the appeal. The current situation of one flight a week limits the number of tourists, which is a good thing (my flight was roughly half western tourists, half more local visitors/returnees). Tourists are still enough of a novelty that the little kids are happy to wave or ask you your name, or show off a pufferfish without expecting/demanding a tip.  But it probably won't last. As the UAE have taken more of an interest in the island and started buying up prime locations there, it might not be too long before luxury hotels start appearing on these exotic locations.  The current state of Yemen government would seem to make regulation or preservation or sustainable development just a dream.  Incidentally, the island felt untouched by the current mainland Yemen civil war.  It was actually one of the safest feeling places I've ever been. 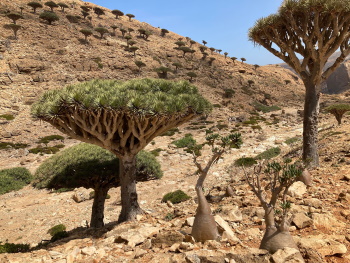 I visited Socotra in November 2021.  At the time of my visit, Air Arabia provided Monday-only charter flights between Abu Dhabi and Socotra, so visitors were required to spend a week on Socotra.  Given that all tourists arrive and depart at the same time, tour operators seem to follow the same general itinerary, although they apparently coordinate so that sites are not inundated with tourists on the same days.  I went with Untamed Borders.

During the course of my week, we visited:

Day 1 (arrival): Delisha beach, not far from Hadibu, so seems like many visit this beach and sand dunes on the day of arrival

Day 2: Qalansyia in northwestern Socotra, where we picked up a small fishing boat for the ninety-minute trip to Shuaab, the island’s nicest beach. Along the way we passed through several schools of sardines, so abundant that the turquoise water appeared black and attracting a feeding frenzy of sea birds, spinner dolphins and one whale shark. We spent the end of the day at Detwah Lagoon.

Day 3: snorkeling in the Dihamari Marine Nature Sanctuary at some of the richest coral reefs in Socotra, where it was easy to see colorful parrotfish and angelfish, but not lobsters. Fortunately, a local lobsterman had caught several spiny lobsters — I bought the largest for only $15, which we dropped off at the restaurant for dinner.

Day 4: Momi plateau, covered with desert roses, one of the rare bottle trees found only on Socotra, with most of the afternoon swimming in a natural pool at the bottom of a canyon, reached after an hourlong descent along a goat trail.

Day 5: we drove to the center of Socotra to visit Firmihin Forest, home to the island’s densest concentration of dragon blood trees, named after the red sap.

Day 6: Homhil Nature Sanctuary in northeastern Socotra to hike to the natural infinity pool at the end of a valley lined with dragon blood and bottle trees.

Day 7: southern coast on the Indian Ocean to spend the day on the beach and climb the Zaheq Dunes.

Day 8 (departure): spent in Hadibu, the largest city on Socotra.

Many years ago we went to Socotra from Sinai. Socotra was mine 500th sites that I had been to. So different and exciting island. Many trees are endemic.The most remarkable ones are Dragon Blood tree, Desert Rose and Cucamber tree. And also many birds can be seen. Goats give big harm to the nature. But meat of goat is so delicious. Sea is so clear and full of corals. You should stay at least 4 days there. After Gallapagos Socotro is second interesting island. And also you should try Socotro Honey

The site has 18 locations

Destroyed by Hurricanes or Typhoons: Cyclone Megh (Nov 2015): "... number of homes have been destroyed and 5,000 more displaced people have fled the northern shores of the island to schools, universities and hospitals"

Slavery
Incense Route: Socotra had become ?of major importance as a staging-post in the incense trade? by the middle of the first millennium BCE

Da Cunha Family: Tristan da Cunha captured it in 1507
Alfonso de Albuquerque : Captured it (in a joint action with Tristao da Cunha) in 1507
Marco Polo: Later, on the 13th century, the great Venetian seafarer, Marco Polo, reported: "The inhabitants are baptized Christians and have an archbishop. ... It should explain that the archbishop of Socotra has nothing to do with the pope of Rome, but is subject to an archbishop who lives in Baghdad. ... You should know also that, if the archbishop of Socotra dies, his successor must be sent from Baghdad, otherwise there could never be an archbishop here." (nom file)
Tristão da Cunha: After the Battle of Barawa (1507) and the subsequent defeat of the Portuguese, Tristão da Cunha, severely wounded, sought refuge in the Socotra islands after losing his men and ships. (wiki)

12 Apostles: where the apostle Thomas by traditional accounts brought Christianity while en route to India

Miocene: "..comprises an..igneous basement from the Pre-Cambrian Era and a complex of early Palaeozoic rocks which are overlain by a mantle of limestones ...from the Cretaceous and Eocene Age..... The continental promontory on which Socotra is located separated from Africa some 36mya at the same time as the rifting which created the Gulf of Aden" (Nom File)

Dubbed as another WHS: Galapagos of the Indian Ocean

Inscribed on a single criterion only: x. to contain the most important and significant natural habitats for in-situ conservation of biological diversity, including those containing threatened species of outstanding universal value from the point of view of science or conservation.
Natural sites filling gaps cited by IUCN: Socotra ecoregion