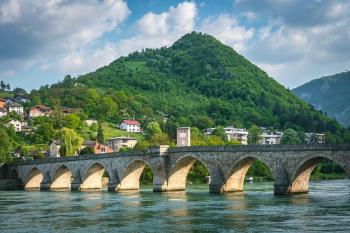 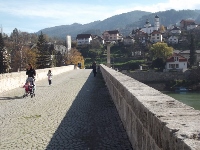 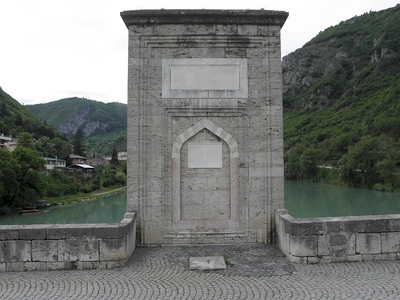 This seldom visited WHS lies hidden in the far east corner of Bosnia Herzegovina. I visited it on a day trip from Sarajevo: 3 hours to get there, 75 minutes in Visegrad, and then 3 hours on the bus back. It's a sacrifice one sometimes has to make in pursuit of visiting as many WHS as possible. The fun thing was: I wasn't the only one who had chosen to spend the day like this. An elder Japanese couple did exactly the same outing, just for taking some pictures of the bridge and then turn back to Sarajevo.

The bridge is closed to traffic nowadays, but pedestrians can cross. A large group of local youth was singing and drinking beer near the mihrab at the center of the bridge - a celebration of the end of the school year I believe. Otherwise, it is just used as a shortcut between Visegrad city and the houses on the other side of the river. There's a new bridge 1km upstream where motorized traffic is directed to.

I wasn't really perplexed by the bridge at first sight. It's a rather sober construction, obviously a grand piece of work in its time but a bit underwhelming in 2013. Due to human impact, the water level has risen over the years so the bridge looks different now than when Sinan designed it. The pillars almost aren't visible anymore.

Getting to Visegrad means that you enter the Republika Srpska, the autonomous part of Bosnia Herzegovina edged out for the Bosnian Serbs in the Dayton Agreement. For me, it felt like I was back in Serbia, mainly due to its Cyrillic signage.

P.S.: According to the Visegrad Tourism website, reconstruction of the bridge has started in April 2013. It will last more than 2 years, and the bridge will be closed off for pedestrians too, starting in the Summer of 2013. I did not see any reconstruction activity going on when I visited on May 16th, so maybe there's a delay.

Works by Nobel Prize winning authors: The Bridge on the Drina by Ivo Andri