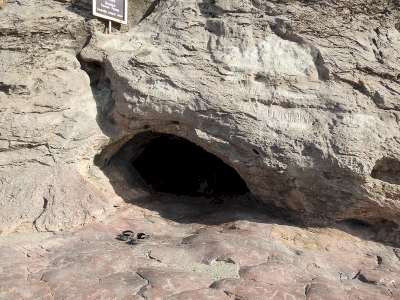 Sulaiman-Too is the landmark of the lovely city of Osh. It is a mostly relict cultural landscape of a sacred mountain – so much was destroyed during the Soviet-communist period of Kyrgyzstan, that really only the caves and the legends remain. A few recently revived or added Islamic buildings can be found at the foot of the mountain, outside the gates, including the pretty, Arab-sponsored Sulaiman-Too Mosque dating from 2012.

Accurate information on how to visit the mountain is surprisingly rare to find. One can actually enter from two sides: where the English language sources seem to steer you to the steep stairs from Kurmanjan Datka Street, the locals generally use the winding way up from Gapar Aytiev. A handy overview map and a larger car parking can be found at that entrance.

There’s a fence fully encircling the mountain, I guess to avoid rough sleepers. A 20 Som entrance fee is only levied from 9 a.m. onwards: there’s a ticket kiosk at either entrance. I entered at 8.45 and found the gate open. I also encountered people coming from the other side, they must have been on their way from around 8. So I guess opening hours are between 8 a.m. and sunset.

Local people seem to do this walk along the ridge of the mountain as a daily exercise. The easy path has an iron railing and is largely made of cement. Here and there you can still see the original pilgrim's path: worn, marble-like stone which is a bit slippery to walk on.

I sat for a while on a strategically placed bench in front of two sacred sites: Beshikene and the Tamchy Tamar cave. Two local women eventually arrived, dressed in popular floral dresses. They kicked off their shoes at the cave and crawled inside. It turned out that the cave is so deep that two adult women can disappear completely out of sight. They went in there to pray: the drops of rainwater falling from the ceiling would make blindness and other eye problems disappear.

Further down the path, you pass two larger caves, which are located in two of the other peaks. These can only be reached via an uphill sandy path. You aren’t allowed to go in there. Around the corner lies the infamous museum, built into the largest cave during Soviet times, destroying its sacred function. Originally it even served as a restaurant, it has only been a museum since 2000. There are some pots, pans, traditional costumes, and stuffed animals to see. Not really worth the 150 Som entrance fee. Walking down further along the path, you’ll reach the other entrance/exit. Here you can find some excavations from the Bronze Age.

Even sadder than the museum is the fate of the petroglyphs. Most of them are located near the Kurmanjan Datka entrance: don’t go up the stairs, but follow the flat path to the left. There is so much graffiti that the old drawings can hardly be distinguished anymore. The photos in the nomination file show them as white drawings (probably colored white later to make them more visible), often displaying circles and rakes. I found a few, which may have been historic ones or later emulations. There are a lot of warning signs at the mountain (Don’t write on the rocks! Don’t enter the caves!), but there is still little oversight. I only encountered one security guy, next to the House of Babur at the first peak. 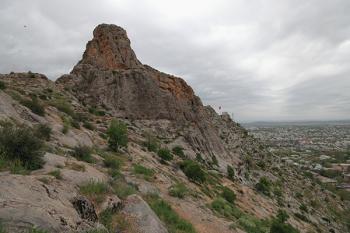 Celebrations devoted to inclusion of Sulaiman-Too in UNESCO World Heritage List to run in Osh (2009.07.12)

Silk Roads: Classic Land Route; "In mediaeval times Osh was one of the largest cities of the fertile Fergana valley at the crossroads of important routes on the Central Asian Silk Roads system, and Sulaiman-Too was a beacon for travellers." (AB ev)
Bronze Age: Bronze Age settlement
Mughal Empire: Babur, founder of the Mughal dynasty, is said to have built a small mosque here in 1510

Irrigation and drainage: In the Middle Ages irrigation channels from the Ak-Buura River were created along the lower slopes, and one of them is still functioning on the northern side (AB ev)

Named after individual people: A 16th century moslem prophet named Sulayman
King Solomon: "The modern name related to a Muslim legend about stay of the prophet Sulaiman, or the Bible Solomon in Arabian sources, at the mountain." (Nomination document)

Mosque: Two largely reconstructed 16th century mosques
Sacred Mountains
Mithraism: "There is material to suggest that the earliest cult of Sulaiman-Too could be Mithraism. Mithra, one of the most ancient Indo-Arian gods, was later included in the Zoroastrian pantheon." (AB evaluation)
Legends and Folk Myths: Women who ascend to the shrine on top and crawl though an opening across the holy rock will, according to legend, give birth to healthy children. (Wiki)
Islamic pilgrimage sites: Sulaiman-Too is the main holy and pilgrimage site for Muslims of southern Kyrgyzstan and the Ferghana Valley
Shamanism: Today, rituals and prayers connected with domestic animal sacrifice, shamanism ideas of fertility, ancestors’ cults or magic treatments are still practiced at the cult sites. (AB ev)