It is the most important surviving manifestation of the indentured labour system from the 19th and 20th centuries. Only 3 structures of the original site remain. It includes sheds for immigrants, quarters for officers, a hospital and offices. All immigrants were registered and photographed after disembarkation. After the end of the indentured labour system in the 1920s, parts of the depot were gradually destroyed by the government and by cyclone Carol in 1960. 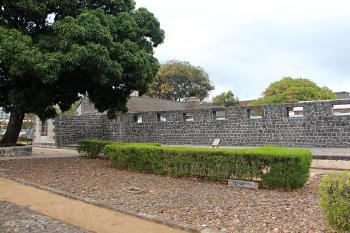 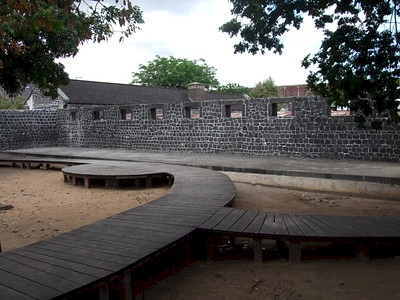 Entrance to the site is free, as is the guided tour. The first thing that I noticed is that it all looks very recently restored. I had heard bad reports about its status in the past, but right now the Aapravasi Ghat Trust Fund is taking things seriously. Even a whole new interpretative center is under construction at the moment. That would be a good addition I think, as the remains of the site are small and it’s hard to imagine what happened here from some crumbling stone walls. Archaeological digs are still underway too, in the hope of recovering more. Only about a third of the site is left now, the rest has been paved over during the construction of the main road through Port Louis.

The best-preserved parts are the lavatories & baths for the immigrants and the small hospital. I went around with a guide once and after that did another round on my own. I knew beforehand that there isn’t much to see, and I already was glad to see that the caretakers are making an effort to preserve and improve it. There were a couple of other tourists around, it’s presented as an important feature of Port Louis nowadays. My 2001 Lonely Planet for Mauritius didn’t even mention it. Despite all this, it will be hard to spend more than half an hour here.

Located in a Capital City: Port Luis (Capital of Mauritius)
Indian Ocean
Situated in one of the SIDS: Mauritius 2006