Bisotun is an archaeological site located along a historical trade route, containing remains dating from pre-historic times through the history of ancient Persia.

It bears unique testimony to the Persian empire and the interchange of influences in art and writing in the region. Its primary monument is the Bisotun Inscription, made in 521 BC by Darius I the Great when he conquered the Persian throne. The inscription is written in 3 languages: Elamite, Babylonian and Old Persian. It is to cuneiform script what the Rosetta Stone is to Egyptian hieroglyphs: the document most crucial in the decipherment of a previously lost script. 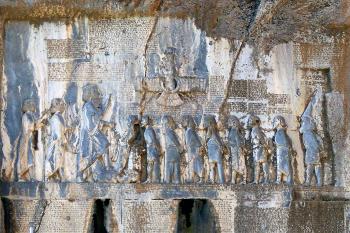 I note that the previous 2 reviewers managed actually to climb up to the main bas-relief (in 1991 and 2012). I fear that such access is unlikely ever to become the “norm” again. When we visited on a Friday in Apr 2016 the site was packed with Iranians enjoying themselves on their day off and the practicality of arranging for large numbers of visitors to climb up and down the rickety scaffolding which is the only way of reaching the carvings set high up on the cliffs seems zero. One can certainly appreciate the efforts of Sir Henry Rawlinson, who copied the inscriptions in the 1840s whilst suspended by ropes!

The knowledge that one isn’t going to be able to see the main attraction very well is a bit of a “downer” on the visit - but there are other things to see at the site. Firstly, Mt Behistun (on the base of which the bas reliefs are carved) is impressive in itself – towering majestically and almost vertically above the plain and visible for a great distance around (still snow capped in April). This striking mountain’s location on important military/trade routes and the emergence of running water from it into a pool, no doubt explain its long significance to Man. The National Museum in Tehran has an entire exhibit given over to the discovery in 1949 in caves on the mountain of what are the oldest known human remains found in Iran. The Nomination goes into some detail about the 5 caves which have been found to contain remains going back to the middle Paleolithic. The proposed Statement of OUV and Criterion ii also mentioned the site’s “Prehistoric credentials” but this aspect seems to have been downplayed and the inscribed details mention only “Crit iiii - There is evidence of human settlements that range from the prehistoric times to the Achaemenid, Parthian, Sassanian, Ilkhanid and Safavid periods” and concentration (probably rightly) is placed on the site’s Achaemenid aspects.

As far as we could discover only one of the caves is relatively easy of access (Shekarchian) but we didn’t try. The famous “Sarâb” or “Pool of Bisotun” where the natural spring water collects, lies directly along the main path and is therefore highly frequented by picnickers etc. It seemed to us to have been somewhat degraded by the creation of a wall around it – though ICOMOS was pleased to note that an earlier concrete one had been replaced by one with stone facing! It is interesting to note that the AB evaluation comments “There have been relatively few visitors visiting the site, ca 23,000 in 2004.” In the same year the number of “International Visitors” was just 2033. Things have certainly changed and there must have been a couple of thousand people present solely on the afternoon we visited and easily 100 foreigners. The site is only 25kms outside Kermanshah which has a population approaching 1 million.

Another point of interest is a statue of Hercules which is situated to the right of the path just before the defile leading up to the main inscription. He has an interesting history – only discovered in 1958 when a path was being built, he is from the Seleucid times (i.e just post Alexander the Great) and has an inscription which dates him at exactly 148BC. The Nomination File dismisses him as “an awkward piece of work, not up to the standard of the period but important because of its dateable Greek inscription”. His head has been stolen several times and is currently an obviously “stuck on” duplicate in silicon with a rather fey expression. This perhaps isn’t surprising since, as a notice at the site says - “1979, the hand, bowl and genital organ was destroyed by vicious people”. His head may have been replaced but not his other attributes!!

A bit further along the path is the Farhad Tarash – a gigantic smoothed wall from Sassanid times, apparently prepared for an enormous carving which was never completed. It is now used for rock climbing competitions! It is a reminder that the Persian tragic romantic legend of Farhad and Shirin which features in the Shahnameh epic is connected with Bisotun.

Which takes us to the main aspect of the site – the Achaemenid inscription. To get an idea of the location of the inscription among the scaffolding and why it is unlikely that close access for the multitudes is ever going to be provided in future see this second photo – 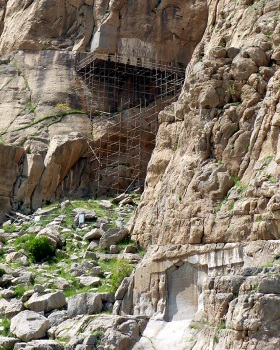 Because of the scaffolding, it is necessary to stand a long way back in order to obtain a relatively unobscured view. We had brought binoculars with us and these were worth having, but I was also reasonably pleased with my “close up” photo, which was taken hand-held with a 600mm zoom from around 250metres away I guess. The centre of the detailed photo shows the main panel with Darius standing on the pretender to the throne whose assassination led to his reign. In front of him, all tied up, are the 7 rebels he initially defeated and, rather nicely, one can make out that the 8th (the guy with the conical hat who was a Scythian named Shunkha) was added a few years later after another rebellion! The cuneiform inscriptions in Babylonian, Elamite and Old Persian telling the “World” all about Darius are located outside/around this central panel but cannot really be made out from this distance. However the ones in the photo beneath the picture are the Old Persian ones. They of course enabled cuneiform to be deciphered via the “Rosetta stone” approach.

The worldwide profile and significance of the inscription makes it an essential visit in any full tour of Iran. Ok – the actual view is a disappointment, but with appropriate equipment and some preparation on what the inscription is showing, some value can still be gained from seeing both it and its location/surroundings.

we visited this site in november 2012. After purchasing our tickets we started to walk on the foothpath and saw on our right the Mitridate II inscription and the Hercules statue both from partic times. We the walked down to the caravanserrail only to find out it was closed. Disappointed we tried to reach the main attraction of the site, the achemenid bas relief by Darius the Great only to find out that the stairway to it was closed. Even from below it was impossible to see anything because they had covered the structure of the stairs with wooden panels. Furious we went to the ticket office but the man in charge said it was closed because it was too dangerous. We left saying that we were going to complain with Unesco but stopped not far from there. With no surprise (once you get to experience the extremely proud and kind attitude of iranians towards strangers) the man reached us with the keys and accompanied us to the top where we had the chance to see this masterpice on our own for about 20 minutes and take fantastic pictures. As expected when we tried discretly to tip him something for his help he firmly refused and warmly waved us good bye.

Archaeologists will carry out an archaeological research on Bistun to unearth a settlement date back to the third Iranian dynasty, the Arsacids (2010.03.26)

By constructing a fountain in vicinity of Bisotun, the municipality of Bisotun has violated the cultural landscape of the eighth Iranian world heritage site. (2007.03.14)

Caravanserai: Safavid caravanserai
Prison: "the Shah-Abbas Caravanserai was used for various purposes, e.g. as a prison. In 2002, it was acquired by the ICHTO, and has been restored to receive guests and scholars involved with the Bisotun project." (Nom file)

Damaged in World War II: "The monument later suffered some damage from Allied soldiers using it for target practice in World War II, during the Anglo-Soviet invasion of Iran" (Wiki)

Zoroastrianism: Shows a winged figure, that is generally identified as Ahura Mazda of Zoroastrian belief (Bradt guide to Iran, 2014 edition)
The Magi: Where there is an inscription mentioning the Magi, though of course not the Biblical ones
Hercules: "Of the post-Achaemenid remains, the Seleucid figure of a resting Heracles dates from 148 B.C. Though not of high standard technically, it is important because of its datable Greek inscription....The head of the Heracles statue was stolen in 1993, but was later recovered and restored. It is now in museum, while a replica has been placed in situ." (AB).

Built in the 6th century BC: Bisotun Inscription, made in 521 BC