Malpelo Fauna and Flora Sanctuary is a protected area for sharks, turtles and other sea animals.

The designated zone includes Malpelo Island and its surrounding marine environment. The island is located in the Pacific Ocean 500km off the Colombian coast.

The site is a fishing-free area, turning it into an "oasis in an oceanic desert". Malpelo holds a unique shark population; swarms of 500 hammerhead sharks and hundreds of silky sharks are frequently seen by diving expeditions. It is also the habitat of the critically endangered hawksbill and leatherback turtles. 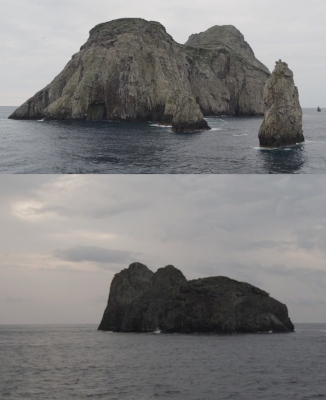 After Cocos Island and a week liveaboard on the "nearby" Galapagos islands (actually Darwin and Wolf are as close to Cocos as the mainland but unfortunately commercial lines don't combine these two areas) I thought it would be nice to complete the diving in the area with Malpelo, even though I was somehow never interested in diving here. At first that didn't work out because the only operator going to the island, Ferox, didn't have trips around May and June because it's the end of Dry Season and start of Wet Season so I think rough weather prevent a pleasant journey. The trip from Buenaventura (itself a 3h trip from the nearby town of Cali) is 30+ hours depending on how the weather is. They don't even give you a concrete arrival time because the vessel is a little older and just seems to rough it out best it can. The trip isn't nauseating as much as I thought and a good chunk is overnight but I could still do without seeing that I wasn't really so excited to go in the first place. When I finally took the trip I had already done a lot of diving in special places, and even though I don't dive all the time when I have free time (it's expensive and I'm not into just seeing random marine life and rocks) the crew and other guests made it seem that Malpelo would be special.

So for one, the hammerhead season was done, and for me it was ok because they were everywhere on my previous trips but you might want to keep that in mind. The wet season is mainly silky sharks and that's not very special even though they are curious and nice, it's not really something you probably take a 30+ trip to see. You can see whalesharks but it's rare.

Oh of course, you finally get to see Malpelo, the only big island in the middle of this large ocean area. It's....not pretty. It's grey rock all over, no vegetation worth mentioning and even if you were allowed to step on it it would be a rough hike. It's mainly packed with masked boobies, crabs and some lizards (small). If you want to get good photos of these you better bring a very good lens.

Dives will be around the entire island. Undersea isn't exactly prettier than the rock itself but you get huge schools of fish here and there, crabs, if you are lucky a whaleshark might pass by (not in my case). As expected the diving wasn't as epic as Cocos or Galapagos can ever be, but don't let that give you the wrong impression, I was sort of "spoiled" by those places because you still see A LOT and it is never boring but it just doesn't seem the place I would seek out for moray eels.

Overall I still wouldn't recommend such an expensive trip if you have other options. Again, don't want to seem negative, it's a good dive site but considering the hefty time spent getting here I don't believe it was worth it. The 10 days on sea plus the days getting to and from the harbor is a lot of time for a rather mediocre dive location. The main draw must be the specialty of it being in the middle of nowhere which you can also get at some better places.

Finally, the UNESCO status, I don't really see it worthy. It's subpar compared to other locations, it's had huge problems of shark fishing because unlike Cocos and Galapagos there is no navy or guard station capable to protect the island properly. If it should be a WHS then maybe combined with other islands or the entire protected area between Colombia, Costa Rica and Ecuador, and while Cocos and GPS definitely are worthy of an inscription I find Malpelo is nowhere near that special.

Approximately 2,000 sharks were slaughtered in a marine sanctuary off Malpelo Island (2011.10.21)

Miocene: "Malpelo Island is composed of Miocene pillow lavas, volcanic breccias, and basaltic dikes that have been dated as being 16 to 17 million years old. This island and the underlying and underwater Malpelo Ridge were created along with the Carnegie Ridge in the Late Miocene by a very complex interaction between the Cocos-Nazca Spreading Centre and the Galápagos hotspot" (Wiki)