The Sichuan Giant Panda Sanctuaries, located in southwest Sichuan province, are home to more than 30% of the world's highly endangered Giant Pandas and are among the most important sites for captive breeding of these pandas.

It covers 9245 km2 with seven nature reserves and nine scenic parks in the Qionglai and Jiajin Mountains. Along with the Giant Panda, the sanctuary is a refuge for other endangered species such as the red panda, the snow leopard, and the clouded leopard. Outside of the tropical rainforests, it is among the botanically richest sites of the world and is home to between 5,000 and 6,000 species of flora. 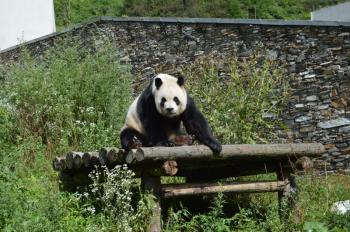 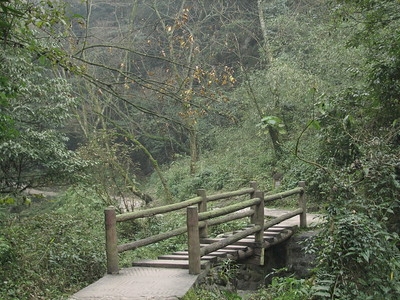 This WHS highlights the habitat of the Giant Panda. This includes other animal species, like the similar elusive snow leopard, the golden monkey, black-necked crane, brown bear, red panda and golden eagle. Among the flora the high Rhododendron diversity (100 species) stands out. I spent half a day hiking around Qingcheng mountain (on what is called the 'back side' or 'rear mountain', the higher and more natural side of the mountain, instead of the front where most of the Taoist monasteries are located). The cable car ride up gives a good view of the tall trees in this mixed forest, and also the larger birds (I saw some black/white long tail feathered ones). Hiking down through the lush forest I encountered several waterfalls, caves and high diversity of low plants.