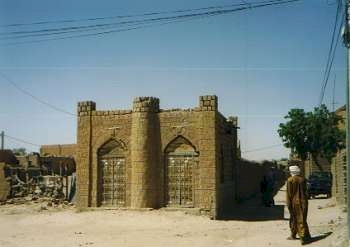 The past of Timbuktu past is more glorious than its present. Now it is a little town on the edge of the Sahara, with sand-covered streets and souvenir selling Toeareg. The mosques are worth a visit, as are the old houses in the center of town with their beautiful manufactured doors.

Sahara: "its important role of commercial, spiritual and cultural centre on the southern trans-Saharan trading route" (OUV)
Sahel
Disputed territories: Claimed by by the Tuareg rebels of the MNLA, as part of the nation of Azawad

Ibn Battuta
Leo Africanus: Probably visited by him around 1510. His description of it in the Descrittione was one of the sources for the fabled vision of the city which Europeans had, and led to their attempts to reach it in the 18th/19th centuries
Giovanni Belzoni: died of dysentery in Benin (modern Nigeria) trying to reach Timbuktou in 1823
Named after individual people: Buktu, the woman who was in charge of guarding the village when it was established

Fatal Accidents or 'disasters': At least 26 people have been crushed to death in a deadly stampede in the famous Djinguereber mosque in the city of Timbuktu (Feb 2010)