The Etruscan Necropolises of Cerveteri and Tarquinia bear witness to the achievements of Etruscan culture.

The necropolises of Tarquinia have some 6,000 tombs, 60 of which include wall paintings.

The most famous attraction of Cerveteri is the Necropoli della Banditaccia, encompassing a total of 1,000 tombs often housed in characteristic mounds. It is the largest ancient necropolis in the Mediterranean area.

The Etruscan cemeteries of Cerveteri and Tarquinia had been on my wishlist for long. Unfortunately they are rather remote, northwest of Rome and poorly accessible by public transport. Actually, they were not on the program for this trip either. But after another look at the map, they seemed just within reach for a daytrip from Tuscany. So I thought 'Now or Never!'.

Tarquinia was the main city of the Etruscans. This pre-Roman people lived in central Italy (Tuscany, Umbria, Lazio). More than 6,000 of their tombs have been discovered near Tarquinia, of which 20 are open to the public. They date from the 6th and 5th century BC. Most tombs are carved into the rock, and were hidden under burial mounds. Now they are covered by stone constructions for protection. The interior of each of the tombs can be visited. There are staircases that take you down a few meters underground, so you'll end up at eye level with the burial chamber itself. For convenience sake, they have added electric lighting which you can start by pushing a button. The light illuminates the painted walls of the tomb: red and blue are the most common colors. The illustrations are numerous, ranging from banquets to hunting scenes. False doors are also often depicted, meant as access to the afterlife. Only the tombs of the wealthy were painted, about 3%.

The entry fee for the burial monuments (8 EUR) also gives access to the Etruscan archaeological museum. This museum is located in an old palace in the center of Tarquinia, about 4 kilometers away from the tombs. There are three floors of exhibition rooms, all dedicated to the Etruscans. Here you see all kinds of moveable objects that have been found inside the tombs. The dead themselves were placed in sarcophagi, bearing an image of themselves on the cover. Contents of the graves include statues, vases, pots, jewelry and urns. Even ostrich eggs from the Nile Delta were found (a coveted luxury product for the rich). Forty-five minutes south of Tarquinia lies Cerveteri, another major Etruscan city. The tombs here are located in a kind of park. It encompasses no fewer than 1,000 tombs, some dating back to the 9th century BC. The graves here are still covered under mounds (tumuli), which are overgrown with grass and shrubs.

Except for one couple, I'm the only visitor here on this sunny day in February. I follow the designated walking route along and around the tombs. It's all a bit spooky here. It is also possible to enter the tombs. But these burial chambers aren't painted (anymore). However, some have beautiful stone reliefs. The Tomba dei Relievi for example holds reliefs of animals, carts and tools.

Cerveteri is a real Necropolis - a city for the dead. It looks like La Recoleta (the famous cemetery in Buenos Aires), but with tumuli instead of marble graves. The 'city' has one main road, and there are side streets with smaller, rectangular graves for ordinary people. This WHS has definitely met my expectations: Tarquinia and Cerveteri complement each other well! 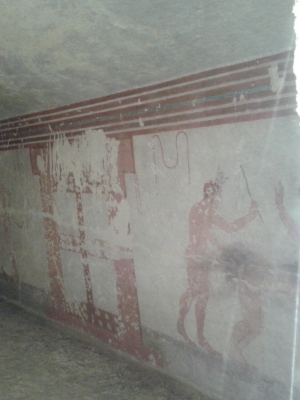 Etruscan history as well as related artefacts are fascinating. It is almost impossible to miss it or ignore it when travelling with open eyes in Tuscany, Umbria or Lazio regions of Italy.

From the WHS sites, I visited only the Necropolis in Tarquinia as a part of the tourist trip to central Italy. As it was quite busy trip, we had no time to visit the related museum in Tarquinia town center. However, I have visited Etrucan museums in Viterbo and Chiusi as well as the Etruscan sites near Perugia (Ipogeo Dei Volumni - oddly located close to the highway intersection) and Sovana (fascinating Tomba Ildebranda) before - all of these sites not included to WHS. Therefore, I was able to enjoy the Tarquinia site and understand it in the context. The most important feature and the reason for the inscription of Tarquinia were the beatiful paintings, which are fascinating by themselfs even without the context.

I am planning to explore the region of Lago di Bracciano that comprises the Cerveteri site this year. So, I am looking forwards to seeing another aspect of rich Etruscan heritage. 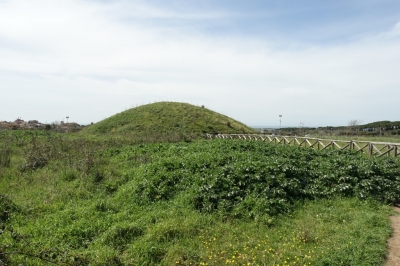 I need to propose an addendum to Els rule about all Italian sites being closed on Monday. If Monday is a public holiday the sites are open, but the following day (= Tuesday) they are closed. At least that's what I learnt the hard way when I showed up in Cerveteri the Tuesday after Easter Monday. It had been a two hour trip from Roma Terminale to the site and I stood in front of a closed gate. I had checked the website before and it did not have any notice of Tuesday being closed.

Without hesitation I did what any seasoned WHS traveller would do in such a situation. No, I did not climb the fence or bribe the guards. I also didn't throw in the towel and head back to Rome. Instead, I accessed the Unesco page and openend the map of the inscribed property. Coming up to the museum gate I had already noticed plenty of tumuli and caves, so I figured that the core zone may well extend past the museum's fence. And indeed: The core zone of Cerveteri is way larger than the fenced area of the museum. Several tumuli are open all year round. The same applies to plenty of the burial caves. Especially, on the back side of the site you get great views and I would encourage you to go there in any case. In addition, there are several spots where you can peek through the fence.

Roman public transport is a mess. I have counted four (!) different public transport providers, each with their own tickets. The Rome 24/48h/.... pass won't help you at all as soon as you leave the rather small confines of the town center. I don't recommend getting any form of pass.

To make matters worse, several of the transport options are not listed on google maps. I found another app which had better coverage of Rome and Lazio: moovit. I can recommend it if you plan to travel in the area. It's not complete nonetheless and it won't help if you bus is stuck in traffic as happened to me.

As far as I understand it there are two options to get to the site:

From the city center of Cerveteri it's a 2km walk up hill to get to the site. 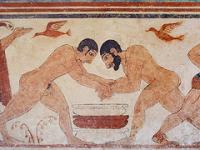 I visited this WHS in August 2013. I drove from Tuscany and slept over in Tarquinia to be able to visit the painted Etruscan tombs at 08:30. What a marvel! There are 16 painted tombs open to the public. The painted tombs are kept at a constant temperature and a controlled environment which means that you can only see them from behind a glass door. Still, photography is allowed and with a lot of patience, time and a good zoom lens you can enjoy the site and take great photos. I was the only soul around at 08:30 which meant that I had the tombs for myself till around 09:45! The beauty of these painted tombs is comparable to that of the Valley of the Kings in Egypt. I also visited the Etruscan Museum in Tarquinia which houses several Etruscan artefacts, vases, jewellery and coins found inside the painted tombs, the famous winged horses, and also whole painted tomb walls !!! So it definitely shouldn't be missed!

I went to Cerveteri - Necropolis through a bus ride to the town, and a relatively short walk from the terminal to the site. Firsty, these are perhaps the oldest monuments I've seen so far, and that really raised my excitement to see the place. According to most reviews, they say that Cerveteri is the better among the two sites inscribed (but I was told that there is another Etruscan Necropolis that is not included however). The paintings are highly interesting and decorative, and suggest how rich their culture as a people were back in their time.

Its interesting how the Etruscans really made a great deal in preparing a planned city of the dead for their departed ones. One way of looking at this site is to compare it with the burial pyramids in Egypt, among others.

Over all, I felt that the Etruscan Necropolis is quite a surprise! I guess, this is one of the few experiences where in there is so much to enjoy in a site that isn't living/alive. 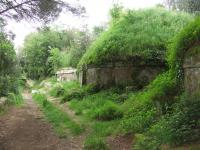 With careful planning I found that I could reach both Cerveteri and Tarquinia by public transport on a day trip from Rome. I took a train to Cerveteri-Ladispoli which connected with a bus to Cerveteri town centre, from where I got a shuttle bus to the necropolis.

After a very satisfactory walk amongst the tombs I retraced my route to Cerveteri-Ladispoli station and caught a train to Tarquinia, changing at Civitavecchia on the way. At Tarquinia a CD bus took me to Piazza Cavour and then continued to the Necropolis.

After the visit I walked back down to Piazza Cavour to catch a bus to Tarquinia station and caught a train direct to Rome.

The trip did not disappoint me. As soon as I stepped off the bus at Tarquinia that cool, sunny morning and saw the signs leading to much-studied tombs, like the Tomb of the Leopards, chills shimmied down my body. Aside from the personal knowledge I had with this particular UNESCO World Heritage Site, its ancient aesthetic qualities alone inspired awe.

Tarquinia has been well maintained. My first impression was of cleanliness and well-marked paths. I noticed attempts at ongoing conservation procedures, as some tombs were closed to the public as part of a regular tomb-maintenance rotation procedure. Additionally, a small espresso bar offered to-go cups of cappuccinos, etc., adding to the cultural experience! It was a perfect moment. Yet apparently perfection can be topped!

The sensations I felt at Cerveteri were once-in-a-lifetime. The site emanates with mystery and days long past. The enormous tumuli tombs, some with steps leading to their grassy, rounded platforms, are like green furry mushrooms. A person could meander amongst the tombs and explore their dark interiors for hours on end, becoming lost in Etruscan history.

Both of these sites deserve visits. But whoever does so should first brush up on the sites' importance in Etruscan history, in order to gain more from the experience than purely aesthetic awe.

Etruscan Necropolises of Cerveteri and Tarquinia

Wikipedia on the Etruscan civilization

A royal tomb in an Etruscan necropolis in Tarquinia has yielded fresh archaeological finds during a summer dig (07.08.10)