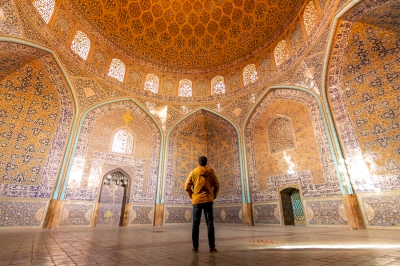 The UNESCO website states that Meidan Emam (also called Naqsh-e Jahan Square) is one of the world’s largest public urban squares in the world, and indeed a tourism icon, with its construction started at the beginning of 17th century. As indicated in the UNESCO WHS website: “an impressive testimony to the level of social and cultural life in Persia during the Safavid era”, and was "heart of the Safavid capital’s culture, economy, religion, social power, government, and politics." Shah Abbas I must be proud of his legacy.

As described in the nomination files, the 2-storey arcade serves as the perimeter of the square, which is interrupted in the 4 cardinal directions by the following beautiful monuments and the Qeysarie gate of Esfahan’s grand bazaar:

I visited the above monuments in the morning and went straight to the bazaar to eat lunch. I dodged my way through as the bazaar was crowded with locals haggling and delivering goods (mostly carpets and spices) to various stalls.

The site was inscribed in 1979 based on criteria 1, 5, and 6 (see UNESCO website). Its strongest point I believe is satisfying criterion 6, as this public square was obviously an integral part of the daily lives of people living in and around Esfahan during the Safavid era.

All information about the site was retrieved from the site's UNESCO page and documents from ICOMOS (1979). 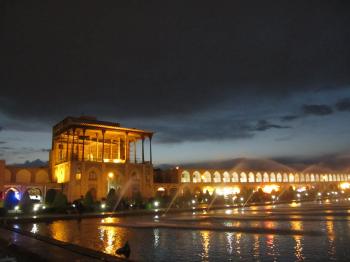 Restorations are gradually resulting in a historic destruction at Isfahan (2009.09.29)

Located in a Former Capital: Shah Abbas the Great 16th century - 1722
Silk Roads: (Near) Classic Land Route; in ICOMOS thematic study but no details on role or function

Name changes: Inscribed in October 1979 as "Meidan e-Shah". All references to the Shah were removed in Iran soon after the Shah departed in Jan 1979.