Persepolis was the ancient ceremonial capital of the second Iranian dynasty, the Achaemenid Empire.

Archaeological evidence suggests that the earliest remains of Persepolis date from around 518 BC. It was Darius the Great who built the monumental terrace, stairways, and the great palaces in this royal city. They are decorated with sculpted friezes and columns. 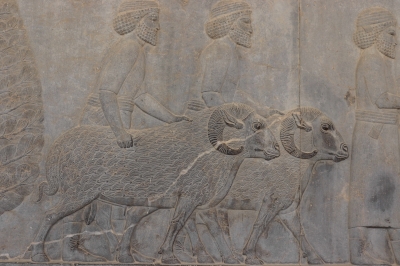 If I could give it 6 stars I would do it. The level of craftsmanship shown in the delegations at Apadana for me is simply mindblowing. I visited Angkor several months after Persepolis and looking at the Khmer details, I felt slightly disappointed (I know that limestone and sandstone are not the same, but still). It takes a good guide (and not a lot of people around) to point out the intricacies of the delegations (ribbons on shoelaces, fingers bent while carrying vessels, various headgears). I am still in awe even now, 2 years after.

The pre-Islamic heritage of the middle east and central Asia hasn't always been as appreciated by Moslems as it is now, note the notorious destruction of the Giant Buddha's in Bamiya, Afghanistan back in March of 2001, or the sale of the Elgin marbles, and all that ancient Egyptian art in various museums around the world. It was something like that which almost happened in Persepolis back during the dark days of the hostage crisis when the limits of revolution were reached. As to the details of the incident below, I cannot vouch for the details, and I never found out the names of the people involved, all I know is that a second tour guide acknowledged the event took place. (Any more information on the subject would be appreciated.)

According to Islamic lore, in the year 610 of the Christian Era, a certain Abu l-Qasim Muhammad ibn ‘Abd Allâh al-Hashimi al-Qurashi was ordered by the Archangel Jabril to read out loud from a book that didn't yet exist. Prior to that, the world was in the "age of ignorance" and what was produced didn't matter all that much.

For the next 1,189 years, most of what was built by the hands of man prior to that was either ignored or destroyed. True, the works of certain Greek and Jewish philosophers were preserved and studied. Euclid and Galen were very useful, after all, but what was left of the great library at Alexandria was burned to the ground (although some Moslems blame that on Christians) and much of everything else was left to rot. then the Turks and Mongols came raping and pillaging their way west...and then in 1799 Napolean Bonaparte came to Egypt to restock the Louvre museum. The "Age of Ignorance" is what brings many tourists to the Middle East, and that doesn't sit well with everyone living there.

Persepolis is the jewel of Persia and the number one tourist attraction in all of Iran. Going all the way to Iran and not seeing it for yourself is a minor crime, and innumerable Achaemenid sculptures on the reconstructed walls are breathtaking. There are also the rock cut tombs of Achaemenids Artaxerxes 2nd and 3rd, one of whom was the husband of Queen Esther. (we'll never be sure which it was).

Going from the parking lot to the ruins, you pass the ticket office, a souvinier shopping center, and a theater showing a filmed introduction to the site, which is, sadly, only in Farsi. Then you pass through the various gates, which are decorated in motifs from various parts of the Achaemenid Empire. Babylonian sphinxes, Griffins from Central Asia, bulls and horses, and lines and line of people carved in bas relief on walls showing every nation in the then known world bringing gifts to the Shah. Imagine a mural in the national headquarters of the IRS showing happy people waiting on line holding cash and checks....you get the idea. They also show Ahura Mazda fighting his nemisis Arhiman, and Darius, Xerxes, and various Artaxerxeses worshiping AM. There is also a little museum there which is actually a reconstructed palace, which shows all sorts of small goodies…

Now why would anyone want to wipe this Unesco World Heritage site off the face of the Earth? Well, on the one hand Alexander the Great, who burned the place down in around 330 BC, had an excuse, he and his men were completely blotto and didn't know what they were doing. But what about that Mullah thousands of years later?

From what I was told, and the two sources could be wrong, the guy and his followers wanted to erase any traces of Mohammed Reza Shah, who had fled the country earlier in the year. The Shah had decided to mark the 2500th anniversary of Cyrus the Great with a huge party at Persepolis, and forgetting that the soiree had actually made a substantial profit in subsequent tourist revenue in the following two years, the mullahs, armed with bulldozers and pickaxes headed to the site to cleanse it of pre-Islamic foulness.

The locals from the surrounding villages and the city of Shiraz met them with greater numbers and almost lynched them. Persepolis was saved!

..and so were the many bas-reliefs made in the area by Sassanian Shahs from the first half of the First millennium CE, Some of which were defaced by Muslims in the age of the Abbisd Caliphs. For that you cannot blame the current regime.

One of my lifetime “travel objectives” has been to visit at least 1 archaeological site from every “significant” (Yes I know this is judgemental but you can’t grind too small!) civilization/empire in world history. For all its fame and extent (from the Indus to Egypt) the Persian Empire has remarkably few extant remains. As far as I know, all are within the boundaries of modern Iran and only 2 (Persepolis and Pasargadae) are WHS (3 other significant sites are at Bisitun, Susa/Shoush and Naqsh-I-Rustam - all of which are on Iran’s Tentative List). This lack of “extended remains” is perhaps because the Empire’s “period of greatness” was remarkably short – from the fall of the Babylonians around 539 BCE to the defeat by Alexander in 331 BCE – i.e. only just over 2 centuries and within that time they fitted in Cyrus, Darius, Xerxes and several others! Also because the Empire was run from the heartland with the outlying provinces or “Satrapies” run semi-autonomously.

While I would like to visit the other sites I have at least achieved my ambition for this Empire by visiting Persepolis and can recommend it. However I still have to visit sites for 2 other civilisations from that area :-

a The Elamites - who preceded Babylon, and have a WHS at Tchoga Zambil in Iran

b. The Medes – who in the Bible (Daniel) were always linked with the Persians (“The Medes and the Persians…”) Their “empire” just preceded that of the Persians until they were defeated by Cyrus and their lands were added to his Empire. Their capital at Ecbatana lies under modern Hamadan and has not been excavated but 2 other sites at Nush-I Jan and Godan Tepe have - neither is a WHS nor on Iran’s Tentative List.

The site for Persepolis was chosen by Cyrus, actually founded by Darius and contains both his and Xerxes’ palaces as well as numerous other structures over a wide area. It is particularly famous for its bas reliefs – the most magnificent of all being the staircase showing the “Satraps” (Medes, Indians, Scythians, Bactrians etc) paying homage to Persia. Despite the destruction of the city by Alexander they are in superb condition and must rank as one of the world’s great examples of “in situ” archaeological art. The Tentative List site of Naqsh-i-Rustam, with its tombs of Darius and Xerxes, is nearby but unfortunately I didn’t visit it. Indeed my visit to Persepolis was as long ago as August 1970 (photo) – it really is time to return to that country, experience the enormous changes which have occurred and to fill in the remaining sites!!

A more modern event for which Persepolis became famous had still to occur when I visited! It was there in October 1971 that the then Shah of Iran celebrated the anniversary of 2500 years since Cyrus’ establishment of the Persian Monarchy. This turned out to be one of the “grandest” celebrations of modern times. It was also perhaps the beginning of the end for Mohammed Shah Reza Pahlevi – his hubris had exceeded all bounds – from then on it was all downhill to his overthrow in 1979.

Iran in conjunction with UNESCO has called an international cooperation for cleaning up the lichen from body of Persepolis World Heritage Site. (2007.05.27)

Around 100 Iranians demonstrated in Tehran today against a dam project that critics say will likely flood the country's grandest archeological sites.Protesters carried banners and symbols from Iran's pre-Islamic Zoroastrian religion and called for the resignation of the top culture and heritage official. (2007.04.22)

Black stains left recently by a film crew on the walls of the palace of Achaemenid Emperor Darius the Great in Persepolis were removed successfully. (2007.03.12)

Railroad leading Persepolis to List of World Heritage in Danger (2006.11.14)

Hypostyle: "As a word, "apadāna" (Old Persian) is used to designate a hypostyle hall," (Wiki) The Apadana Palace at Perspolis is such a structure -

Protective Shelters: The Apadana Staircase has been protected by a roof since the mid 1990s

Destroyed during invasion: Alexander the Great 330BC

Parthian Empire
Located in a Former Capital: Achaemenid Empire - Cyrus
Eunuchs
Achaemenid Empire: Persepolis was the ceremonial capital of the Achaemenid Empire. André Godard, the French archaeologist who excavated Persepolis in the early 1930s, believed that it was Cyrus the Great who chose the site of Persepolis, but that it was Darius I who built the terrace and the palaces. Inscriptions on these buildings support the belief that they were constructed by Darius.

Man-made Terraces: Persepolis is located over a half artificial terrace.
Historical Graffiti: Over the years, many travelers left their mark on the ruins in the form of graffiti, including ... Henry Morton Stanley. The foreign graffiti are concentrated in two particular spots, namely Xerxes’ Gate of All Nations and the Palace of Darius.

Alexander the Great: The complex was taken by the army of Alexander the Great in 330 BC, and soon after the wooden parts were completely destroyed by fire (wiki)
Henry Morton Stanley: Inscribed his name as Graffiti on Bull Gates "Stanley New York Herald 1870". Still visible!
Mohammad Reza Shah Pahlavi: Location in 1971 for the extravagant celebration of 2500 years of the Persian Empire since Cyrus the Great. "The intent of the celebration was to demonstrate Iran's long history and to showcase its contemporary advancements under Mohammad Reza Pahlevi, the Shah of Iran." Wiki - see
Giosafat Barbaro: Barbaro visited the ruins of Persepolis, which he incorrectly thought were of Jewish origin.

University of Chicago Oriental Institute: The OI was in possesion of the "Achaemenid Tablets" from c500BC on loan from Iran since 1937 with the understanding that they would be returned - indeed some had been (They had been discovered by OI archaeologists during excavations at Persepolis in 1933). In 2006 Federal courts ruled that the tablets should be sold and the proceeds used to compensate victims of the Ben Yehuda St bombing of 1997 in Jerusalem which the US claimed had been funded by Iran. A group of vicitms had won a $71 million judgment against Iran in 2003. OI has opposed the seizure - the matter is still unresolved
Excavated by American Universities: University of Chicago

Famous Love Stories: Ahaseurus and Esther
In the Pergamon museum: Numerous reliefs
In the Louvre: Man carrying a kid goat

Extensions on Tentative List: Sacred mount of Mehr, Royal mausoleums in Naghsh-e Rajab and the city of Estakhr