Ashur (Qal'at Sherqat) are the remains of the first capital of the Assyrian empire from the 14th to 9th centuries BC. The Assyrian Empire took its name from the city of Ashur.

Ashur contained a large number of important religious buildings, and a handful of palaces. Documents from the 7th century BCE tell us about 34 temples and 3 palaces. Only few of these have been excavated.

The city was the centre for worship of the god Ashur and the goddess Ishtar/Inanna. Exploration of the site of Assur began in 1898 by German archaeologists. 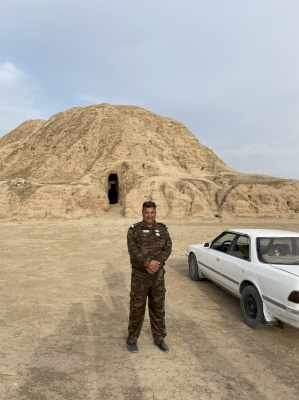 Ashur (Assur) was the first Assyrian capital and remained so for a long period (1400 to 608 BC). Located on the western banks of the Tigris River, just a bit north of the confluence with the Lesser Zab river, it became an important trading and religious centre with a large ziggurat. The city lies about 140km south of Mosul, and we visited the place on the first day of November 2021, coming from Baghdad on our way to Mosul. Our guide Hayder did his homework. The chief of security at this important archaeological site gave us an entry permit on the spot, and we were even driven around the premises in his private car. Here excavations have been done predominantly by German archaeologists, starting as early as 1903, about 4 years after Babylon. Not surprisingly that many of Ashur's artefacts and statues are kept safe far away, in Berlin's Pergamon Museum, some are in the Archaeological Museum in Istanbul. Good in that case, since the nearby Mosul Museum has suffered severe damage to its collections. Ashur was not destroyed by the ISIS extremists on the same magnitude as Nimrud, Hatra or Mosul/Nineveh, simply because only a few palaces and temples (10 out of 34) are fully excavated. But another threat comes from the Makhul Dam project, an ambitious plan of the Iraqi government, creating a 20 mile-long lake, most likely partially flooding the ancient city of Ashur. After a long pause due to the Gulf war, and political turmoil, construction of the dam has just started this year, according to Iraqi press releases.

Dam proposal; state of war in the country

At the Iraqi Site of Assur, Ancient History Stands at Risk of Destruction (05.01.22)

Tell
Ziggurat: "The major features of the city which are presently visible on-site consist of architectural remains (some of them partly restored): the ziggurat and the great temple of the god Ashur, the double-temple of Anu and Adad (with the remains of two smaller ziggurats)" (AB eval)

Destroyed during invasion: Destroyed by the Medes in 614 BC
'Threatened' by Dams: Makhool Dam (now cancelled)

Under control of ISIS: Since March 7, 2015, the city was in ISIL held territory; As of February 2017, the group no longer controls the site, however it is not secure enough for archaeological experts to evaluate (wiki)

Parthian Empire
Assyrian Empire
Eunuchs
Mesopotamia: The ancient city of Ashur is located on the Tigris River in northern Mesopotamia. (AB ev)
Oldest Buildings: Temple of Ishtar 2600BC "The city was occupied from the mid-3rd millennium BC (Circa 2600-2500 BC) to the 14th Century AD" (Wiki). " Early Dynastic period (first half of the third millennium B.C.). Some remains may even date to preceding periods. For this early part the stratigraphic excavation of the temple of Ishtar provided substantial information about the development of the religious architecture. Two of the five major building stages of it belong to this period." (Nom file) "The earliest traces of settlement in Ashur can be found in layer H of the Ishtar temple, but also in the oldest layers beneath the Old Palace, dating to the late Early Dynastic period (in the middle of the 3rd millennium B.C.). In the following Akkadian period (ca. 2340-2200 B.C.) which is represented by layer G of the Ishtar temple, Ashur is under the rule of the kings of Akkad. During the time of the 3rd Dynasty of Ur (ca. 2100-2000 B.C.) a governor of this dynasty is attested in Ashur." (Assur.de)
Excavated by the Deutsche Orient-Gesellschaft: Walter Andrae led DOG excavations at Assyrian capital of Assur from 1903 to 1914 (wiki)

Mentioned in the Bible: Asshur, a city characterized by the mounds of Kalah Sherghat, on the west bank of the Tigris (Genesis 2:14)
Goddesses: centre for worship of the goddess Ishtar

Built in the 2nd Millennium BC: "the most important role of Ashur was from the 14th to 9th century BCE when it was the first capital of the Assyrian empire" (AB ev)