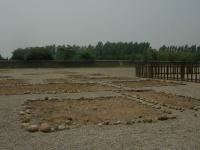 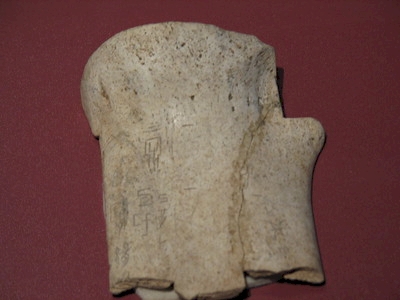 The Yin Ruins are spread out over two separate locations: the Royal Palace area and the Royal Cemetery. Arriving at the gate of the Royal Palace area, I hadn't the faintest idea what to expect about this site. But when I saw the gate I immediately felt that this would be a visit to remember. That gate itself is already striking and prepares you for the shapes that you'll see over and over. Behind the gate lies a park with several exhibitions and a museum.

Starting at the museum is a good idea because it tells the story of the people of Yin. That they did practice animal and human sacrifice on a large scale becomes clear immediately. There are many fine bronze objects on display and of course the bones with writing (oracle bones). At first sight, they look just like normal bones, you have to look up really close to see the inscriptions. Amazing! The general feel of the site is brand new and bright, with a lot of attention put into its layout and detailing. There are explanation boards everywhere in English.

One of the highlights in the Royal Palace area is the 'Oracle bones inscriptions stele gallery'. Here, translations from writings on oracle bones into Modern Chinese and English are displayed. What did they write about? Sacrificing, tribute-paying, military actions and astronomy were popular themes. Remarks on good weather and therefore good harvests are also common.

The visit to the main site ends at Fu Hao's Tomb. Fu Hao was a member of the Royal Family of the Shang Dynasty and China's first woman general. Many bronze, jade and bone objects were found in her grave, which has been restored.

A golf cart-like wagon covers a distance of 5.5 kilometers to the second location, that of the Royal Cemetery. The trip is included in the 61 Y entrance fee. It's a nice ride through Anyang's suburbs and into Henan's farmlands. It is here that the large Simuwu vessel was found, the largest bronze vessel unearthed at Yin Xu. The Royal Cemetery has a number of restored tombs with displays. The items that are shown are mostly replicas, the originals can be found in the central museum or in various museums around the world.

Yin Xu turned out to be the quietest site that I've visited so far in China. I even was the only visitor at the Royal Cemetery!

Located in a Former Capital: Shang Dynasty (1766 BC - 1050 BC)
Famous suicides: King Zhou of the Shang Dynasty of ancient China. Another ruler who killed himself as his kingdom was being taken over. He burnt himself along with his palace.
Bronze Age: Chinese Bronze Age

Luoyang Hotspot: 2.5 hours by bus or 40 mins by High Speed Train to Anyang