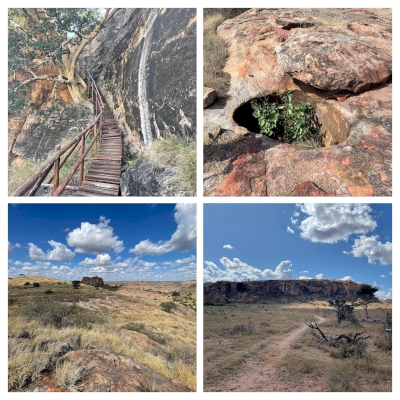 The tracks leading to heritage site is open only to those who join the Heritage Tour which is at 7 in the morning and at 10. The park has a circular dirt ring road and the hill that is the centre of the heritage site can easily be seen from the road, but you must know what you are looking for (the correct one between several hills).

On the heritage tour a guide takes you in a park safari vehicle straight to the hill. When leaving the vehicle, he loads his gun and the takes you by foot to the foot of the hill and up. The entrance is by a wooden stairway which is placed in the same narrow gap as the ancient sacred passage is. On top there are numerous small remains and marks showing what once used to be the royal area of this kingdom. The guide is good and very intense. He knows his story and probably is somehow related to it. After a question from one of the two other people on the tour I understood that the guide’s his uncle has written a book about the site. The story and the site itself are interesting although remains of the kingdom are not very visible.

Later we visited the little museum close to the park entrance. A small but only slightly interesting museum. You can’t help feeling that there are parts missing, parts that’s taken care of by the museums elsewhere.

We stayed in the Leokwe Camp for two nights. The camp is a self-service camp which means you bring your own food. It is a really good way to spend some time in this park. We spent every moment during daylight roaming the park. The dirt ring road I guess are possible to go by a saloon/domestic vehicle, but the fun part really lies in using the more extended roads, the 4x4 tracks. There are easy ones and toucher ones, and by far – the small tough extensions to the ring road are the more rememberable.

The landscape inside the park is remarkable different to the more flattened and boring landscape we passed through on the way up here. It’s rough, rugged, and rocky. It’s up and down, small gorges and hills. Very scenic! Quite a few animals are around but mostly the “regular ones” (like gazelles, zebras, and elephants). There are baobab trees which can make a fantastic scenery for photographing the sunsets and sunrises.

We found a treetop walk that makes you walk up “through the trees”, but nature has taken its revenge. The walk was supposed to continue onto the Limpopo River, but that part was smashed during some rainy season. We could see some remains into the water. Maybe they’ll rebuild it someday.

Also, The Confluence Point, which is a panoramic viewpoint overlooking the junction between the Limpopo and Shashe River, is a nice area.

Since the heritage site is in such a wonderful national park spending some tome there is recommended. At least if you’ve taken the step of bringing a specialized vehicle (4x4). 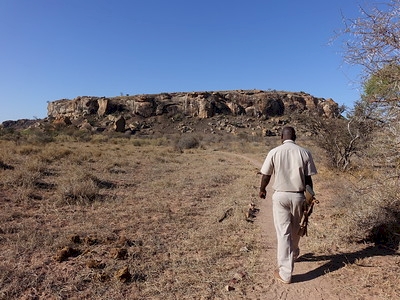 What I found however was a well-cared-for National Park, worth anyone’s visit for a day or so. On my first two half-day trips into the park, I focused on game drives and brushed up my mammal list total: I saw mongoose, klipspringer, southern giraffe and steenbok for the first time. The park isn’t teeming with wildlife: there are no fences between the park and the adjoining zones in Botswana and Zimbabwe, so the animals migrate a lot between the three countries. Also, the density of mopane bushes makes it hard to see smaller animals. But especially the dramatic landscape, with lots of old baobab trees, ridges and canyons make the park attractive.

Mapungubwe was a large inland settlement that pre-dates the much better-known Great Zimbabwe. There’s a hint of Kernave to its story: the chief with his close allies lived in a palace on the hill, while the common people inhabited villages below. In its heyday in the 13th century, the society is believed to have consisted of 9,000 people. While large parts of the park can be explored with your own car, that hill (Mapungubwe Hill) is only accessible with a guided tour from the park office. These 'Heritage Tours' are conducted 3 times a day, and I booked a spot on the 4 p.m. tour about two hours before. I was the only participant.

The flat-topped hill where the archaeological findings have been made lies in a startling green part of the park. Vegetation shows that a river flowed here in the past, so the Mapungubwe people had chosen their spot well. After a short drive, we left the jeep behind and continued on foot. The guide was carrying a gun: this is lion and elephant territory.

Mapungubwe Hill is where the royal family withdrew at a given time, and where three graves with precious objects have been uncovered. It is a natural fortress, the walls are so steep that no one could approach unseen. From photos that I had seen beforehand, I thought it would be a single outstanding inselberg – but in fact whole Mapungubwe National Park is full of this kind of eroded hills. At neither of the two game drives, I recognized Mapungubwe Hill.

In the past, there was only one way up, via a ladder. We used the same approach. It took some 10 minutes to climb steep stairs (modern wooden ones, fortunately), and then we were on the summit. Although naturally flat, it was made more inhabitable by the former residents by adding sand to it. They (the women apparently) took it from the valley below. The top still is covered with a layer of sand with grass, convenient enough to build your hut. The only visible remains are circular cutouts in the soft red sandstone. There is also a water tank and a granary. Water and grains were obviously provided to the royals by the ordinary people 'from below'.

In 2011 a museum opened at the park to show the Mapungubwe findings. But they have not been very successful since to lure away artifacts from the University of Pretoria Museum where most are stored. Mainly glass beads and ceramics, evidence of the position of the Mapungubwe Kingdom at the Indian Ocean trade route, are shown. The most spectacular of the discoveries is a little gold rhinoceros, made of gold foil and tacked with minute pins around a wooden core. I already had made plans to go and see it in Pretoria on my way up north, but it turns out that the Golden Rhino just moved to the British Museum on a temporary loan! It’s the first time that this symbol of post-Apartheid South Africa has left the country. There’s a copy on show in the Mapungubwe museum.

Prized world heritage site Mapungubwe, where the famous gold rhino statuette was unearthed, could soon have the scar of an open-cast coal mine on its doorstep (2009.02.25)

Historical Food Remains: Bones and ostrich eggs
Chinese Porcelain in Africa: "Glass beads, spindle whorls and fragments of Chinese porcelain are evidence for a flourishing trade with the east coast of Africa and, from there, with India, Indonesia and China" (Nom File)
Located in a Former Capital: remains of three capital sites

Foreigner prices: 48 Rand for South Africans, 96 Rand for citizens of SADC member states and 192 Rand for other foreigners