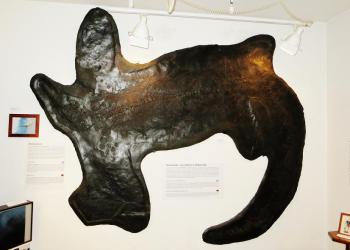 From Varese, where I also went to the WHS of Sacro Monte of Varese, I took a bus to visit the museum in Besano, Italy.

The photo is a replica of the fossil of the Besano-saur.

Now, the walking tour I just described was virtual, with this fantastic CD-ROM the museum in Besano gave me for free. :) 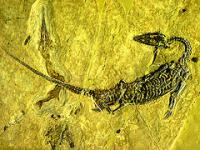 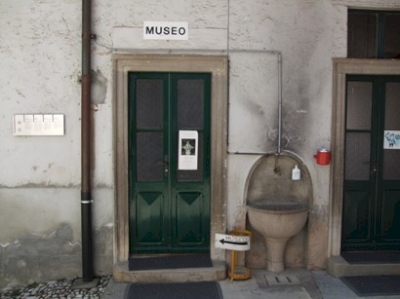 We went by boat from Lugano: 3 or 4 of the excursion boats that tour the lake daily have a scheduled stop at the town of Brusino, at the foot of Monte San Giorgio. It's a pleasant 45-minute trip, on which the real geo-collector also can tick off the Italian enclave of Campione d'Italia.

From Brusino there's a small cable car up the mountain to a panoramic terrace (close to the town of Serpiano). We enjoyed a good cappuccino there and then started walking. Several hikes are signposted from there. I had read about the 6 km long nature trail to Meride (which has a local fossil museum): interesting, but only doable for very experienced hikers. So we opted for the walk down to Meride via the main road. This turned out to be a good choice: it takes about 1h and 20 minutes, mostly through dense forest on a quiet and relatively flat road. The last part of the walk has lovely Alpine pastoral scenes (think cows with bells, stacked hay). And even industrial heritage: a small oil factory that was instrumental in finding the fossils.

The town of Meride where we eventually arrived looked totally closed down for a long siesta: no restaurant or shop open for lunch. The door to the inner courtyard of the museum fortunately was open. And what a funny little museum this is! It consists of one class room size exhibition room, totally self-service. No entrance fee, no staff. The room holds old photos of the scientific expeditions that uncovered the fossils and of course a couple of small and large fossils too. There's a TV where you can start an educating video to learn about how and where the fossils of Monte San Giorgio were unearthed. According to the visitor's guestbook, there is about one visiting party a day. I even found that quite a lot, measured against the remote location and low profile publicity of this site.

Inscribed on a single criterion only: viii. to be outstanding examples representing major stages of earth's history, including the record of life, significant on-going geological processes in the development of landforms, or significant geomorphic or physiographic features
Country gained extra WHS by an extension: Inscribed by Switzerland in 2003. Extended to Italy in 2010
Transboundary sites
Extended: 2010: To include part in Italy