The reserve is one of the very few undisturbed forest areas in the Amazonian region with no inhabitants and no human use. It covers 11% of the land surface of Suriname. Located at the upper watershed of the Coppename River, it contains areas of swamp forest and savannah.

The CSNR was established in 1998 to link up three pre-existing reserves: Raleighvallen Nature Reserve, Tafelberg Nature Reserve and Eilerts de Haan Gebergte Nature Reserve. It has a high diversity of plant life and 400 species of birds. Globally rare fauna species include the Cock-of-the Rock, the Harpy Eagle, Jaguar, Giant Armadillo and Giant Otter. 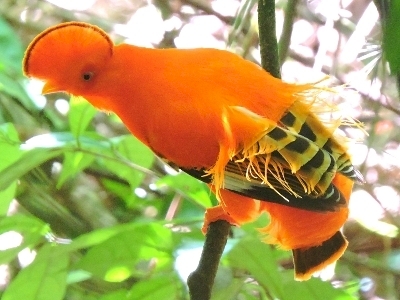 As of this writing, there is still only one realistic way to visit this isolated rainforest site. Organized tours to natural sites are often not my preferred choice because my interests are usually focused on observing and photographing flora and fauna, especially birds. Tours offered to the general public frequently consist of a series of programed activities that take too much time away from those goals, and may also be quite crowded. Consequently, I tried to search for another route to the site that would let me see the forest in a more independent way. There were one or two sites on the Web that describe journeys to the southernmost of the three national parks that were combined and expanded when the site was inscribed. However, those were more like true wilderness expeditions, lasting around two weeks, and that would not have been practical during my current trip. Since I wanted to see the site, I relented, and signed up for one of the commercial tours that depart from Paramaribo and visit Raleighvallen National Park, at the northern end of the inscribed site. As it turned out, that worked out quite well for me in this case.

The standard tours last four days, two of which are mostly consumed by travel to and from the park. The trip from Paramaribo involves a one and a half hour bus ride on paved roads, another two and a half on a long dirt road, and then three hours by small boat on the Coppename River. I had considered trying to arrange getting to an intermediate point on my own, such as the river boat dock, and joining the tour there, but I don’t think that would have been feasible, either. Eventually, my group reached the basic accommodation center on Fungu Island, itself within the core zone of the site. I was told that there was space there for up to one hundred tourists, but I don’t think it could really hold that many at once. My group, the only visitors there at the time, consisted of ten people, some from other countries, but also some Surinamese citizens. The group that departed just before we arrived was also ten people, so it seems that the site is rarely crowded, at least at this time of year. Most of the visitors slept in hammocks within an open-air building, but I paid a little extra for one of four private rooms at the site.

What impressed me the most about this site was the incredibly pristine nature of the forest, both within the core zone, and far beyond. I have been to many tropical rainforests, and almost all of them contain some level of human activity right up to the boundary of whatever protected area is in place. In this case, the riverboat portion of the trip to the park revealed that large areas of the forest surrounding the site are also essentially untouched, which was wonderful to see. I was also pleased that there was some flexibility about the schedule of activities that allowed me more time to look for birds on my own. I went on the two scheduled hikes, to the Voltzberg inselberg peak and to the rapids on the river that give the Park its name, which were fairly lengthy, but there was also time in the early mornings and other times during the day when I could walk off by myself. I also had the opportunity, with a very small extra fee, to begin one of the hikes early, adding a detour to a spot in the forest where Guianan Cock-of-the-Rocks (pictured) have been lekking for many years. Few people make the effort to go to see them, so the last two kilometers of the trail there were somewhat overgrown, forcing the guide to chop our way through. Once there, around ten birds were nonchalantly going about their business at their favorite spot, and, for me, that made the whole visit worth the effort. Overall, there were many interesting animals to be seen, but doing so required somewhat more patience and effort than at some other forests. I suspect that may be because many other forests are now small biological islands, which tends to concentrate all the birds and animals in a smaller space. With the Central Suriname Nature Reserve occupying such a large area, together with the surrounding forest, the animals have more room to spread out, making seeing them a little more challenging. That, of course, is a great problem to have. 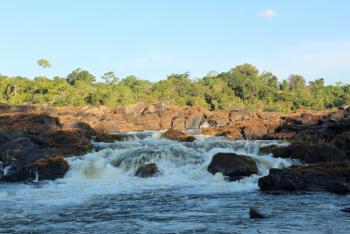 Although I am a long time member of worldheritagesite.org, till now I never wrote a review, mainly because most sites are already excellently covered by others. But to my surprise nobody wrote about the Central Suriname Nature reserve. To my surprise, because although the site isn't reached easily, still a lot of people seem to make it there.

By far the easiest way to visit is on an organised tour from the capital Paramaribo. First you go by minibus to the Kwinti village of Witagron. The bauxite road is not too bad and it takes about 4 hours to get there. From Witagron you continue by boat. In the dry season this is not so easy as water levels can be very low, which means many times getting out of the boat into the water and pushing it forward. Although piranha's, cayman and electric eels live here nobody seems to worry a lot about them.

Be prepared for loud music in the boat.

After a trip of nearly 5 hours we reached the lodge which is on an island in the nature reserve. Accomodation is rather basic, mainly hammocks, but also a few en suite bedrooms. Most visitors are Dutch stagiaires, who are mainly interested in music and dancing, swimming in the rivers and waterfalls and not so much in experiencing the pristine rain forest. This influences the atmosphere and makes the experience less agreable than it could be. Excursions are to the Raleigh falls and a long walk to the voltzberg, which is a monolith towering about 200 meters above the surrounding lush forest. Climbing in this climate is a little hard but views from the top are magnificent. The only animals we saw were squirrel monkeys, howler monkeys ( only heard), the poisonous fer-de-lance snake, some frogs and lizards en a lot of beautiful birds and butterflies.

Because of this enormous area with a completely intact eco system I think inscription as a worldheritage site is highly justified.

Petroglyphs: These statements ignore the fact that the CSNR, or at least parts of it, have been occupied and used by both indigenous and tribal peoples for a variety of purposes and that there is additional archaeological evidence of traditional occupation, including cultural heritage sites such as petroglyphs. - WHS and Indigenous Peoples Rights

Situated in one of the SIDS: Suriname 2000
Amazon Basin: "Although the area of the CSNR is not within the Amazonian watershed, it is mostly covered with Amazon basin vegetation(e.g. Hylea amazonica) and is within the phytogeographic limits of Amazonia." (IUCN)
Territorial Highest points: Julianatop, at 1280m the highest peak in Suriname

Covers more than 5% of country: Covers 9,8% of Suriname