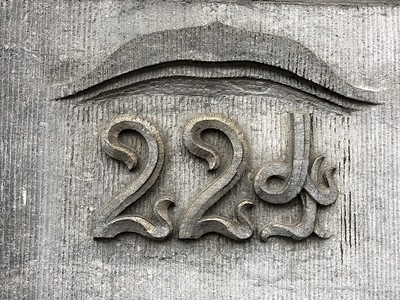 Hôtel Solvay is a late 19th-century city villa in Brussels by the design of the Belgian architect Victor Horta. It is 1 of his 4 Major Town Houses. I visited it two weeks ago on a special tour in Dutch. They want to keep it exclusive: the tours are only once a month and a ticket costs 40 EUR. You must also book well in advance online. In 2002 I already had been to one of the other locations (the Horta House & Atelier Museum), which has no such visitor limitations. It lies only 500m away from the Solvay and a third location (Hôtel Tassel) is also just around the corner.

At noon, around 25 visitors gathered in front of the imposing façade of the Hotel Solvay at the Avenue Louise number 224. We were given solid plastic covers for our shoes so that we would not tarnish the interior. This is now a busy neighbourhood, with a lot of traffic, embassies, shops and restaurants. The 19th-century house is wedged between two ugly office buildings. When the house was built it was free-standing and occupied a large piece of land: 15 meters wide and 20 meters deep on the main avenue between the city center and the surrounding forests of Brussels.

The tour started with an explanation about the Solvay family, who had this house built in 1894. They had become rich in the chemical production of soda and gave Victor Horta a free hand to design a winter residence (they also had an estate outside the city borders). Later the house came into the hands of another rich family (Wittamer) who used it as a bridal fashion studio. Nowadays it is still in private possession of that family and that is also given as the reason that you are not allowed to take photos of the interior. But this is not an inhabited house: except for guided tours like the one I joined, it is also rented out for meetings and other gatherings.

The most spectacular part of the house is located right behind the front door: a double, openwork staircase ending at a huge impressionist painting on the first floor. Horta was known for using visible metal structures in his designs for houses, materials that until then had been used mainly for stations and factories. Various expensive types of wood (including from Congo) and marble have also been processed into this house. Through skylights and many windows, there is a lot of light in the house. On this gloomy afternoon in December however, lights were needed to illuminate it a bit extra.

The interior of this house is still completely intact, including furniture designed by Horta himself and works of art coming from artist friends of his. In every room, the chairs are of different designs and there are many frivolous details such as sliding doors and hidden toilets.

The bottom 2 floors were used to receive guests, the family lived at the top floors. The latter spaces were also more soberly decorated. Here you can see at the ceilings that even in this house not everything is in perfect condition: the layer of paint is coming off. The owners also had staff living and working in the house: they could move completely out of sight of the guests 'behind the scenes' via their own corridors and stairs.

Hôtel Solvay is considered the best kept of the houses designed by Horta in Brussels – both by the ICOMOS advisors and the guide that showed us around. It surely is an advantage that it receives relatively few visitors, so the carpets, etc (all original!) do not suffer too much. When you’re interested in Art Nouveau it is certainly worth this splurge. Next to Dutch, tours are also available in French but not in English as far as I have gathered from the website of Explore Brussels. 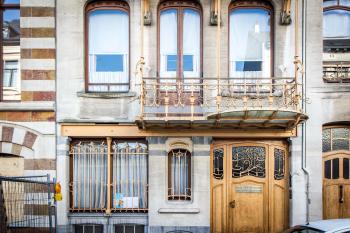 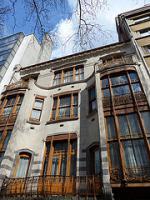 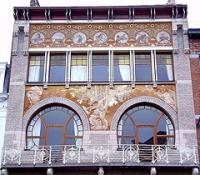 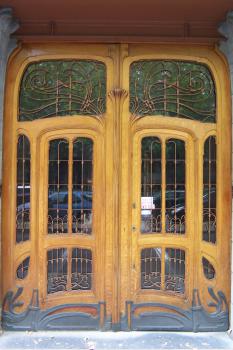