Moravian Church Settlements (UK) is part of the Tentative list of United Kingdom in order to qualify for inclusion in the World Heritage List. It is a proposed extension of Christiansfeld WHS.

The Moravian Church Settlements in the UK comprise the town of Gracehill in Northern Ireland. Founded in 1759, the planned settlement has a traditional continental model grid plan. Its residents were all members of the Moravian Church. Original buildings have survived, with their gardens and workplaces. This is part of a serial transnational nomination effort, together with sites in Germany and the USA. 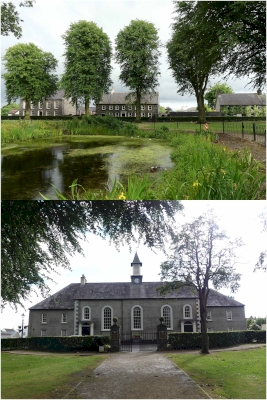 Well – what a strange site suddenly to appear on the UK T List in Jan 22, despite its decennial overall T List review process starting in Mar 22! WHS Community members knew of course of the transnational activity on the subject of “Moravian Settlements” and that it was probably coming, but I suspect that you could be lucky to find 1 in 1000 GB citizens who has even heard of the place. It gets a mention (but no stars) in Michelin Ireland and in LP, but its UK tourism and cultural footprint rests only a trifle above zero.

In the Portrush Tourist office the lady asked where we were staying that night… “Near to Gracehill” we replied. In the subsequent exchanges it emerged that she presumed that we were referring to the ONLY “Gracehill” current in conversation! This is some place called “Gracehill House” which, the Web tells me, is “home to door 7, featuring the Three-Eyed Raven permeate and the Stark Direwolf sigil” (whatever they are!) and is situated a few miles from Portrush, close to the “Dark Hedges” (See "Gracehill golf course" to the north)……whereas “our” Gracehill was a small village situated around 20 miles further south near Ballymena. Of this she knew as little as we do of the World of “Game of Thrones” which, it appears, is a major player in NI tourism with multiple filming locations attracting visitors from around the World.

In June 22 we rolled in to “our” Gracehill at around 6pm and spent c1 hour “seeing” it as the only visitors there. When we had done our planning, a surprise was that the Museum, situated in the Old School House, claimed to be open (and “free”) 9.00 - 21.00 daily (Sun 12.00 – 20.00). This does indeed seem to be the case since most of the building has been rented out to a restaurant and as offices – so the museum is “open” as per their hours. It consists of one room containing information boards about the Moravian church in general and Gracehill in particular, together with some artifacts – documents, clothing etc, but is not itself “historic” in any way other than being in an original building. There is a reception desk - unmanned when we were there. A “historic” (?) “school room” beyond is apparently used to play a video for group visits and may or may not be open during the day but was locked to us.. A very useful pamphlet describing the village was available but only 1 copy remained at 6pm!

A few points from our subsequent tour of the Village

a. There are around a dozen “original” buildings spread around a hedged and grassed village square with a pond and mature trees (Photo 1). In addition, short Brother’s and Sister’s “Walks” lead to and from “God’s Acre” behind the church – the burial ground with its characteristic gravestones as per reviews of the Christianfeld WHS. The atmosphere is rural and peaceful. Although the village also has modern developments, these are reasonably well hidden from the historic village centre.

b. The buildings are identified via small plaques (situated inconveniently inside the hedge surrounding the square) simply as e.g “The Single Brethren House”, “The Widows House” and “The Weaving Manufactory”. Unfortunately all are private houses and all you can gather is their common exterior architectural style. Although the village lay-out is traditional “Moravian” the architecture is “Georgian” using local stone. Only the church is of a possibly “Moravian” design with its separate entrances and seating for males and females.

c. The Church (Photo 2) is also closed however and its high windows mean that one can’t even peek inside to see and understand its layout and the male/female axes behind their respective doors. The Village Web site indicates that prearranged, chargeable guided group tours do visit but otherwise it would seem that the only way to do so would be to be there at the time of a service.

d. The “Gods Acre” gravestones are laid out chronologically as you walk from the entrance. It was interesting to note that the latest ones for 2021 still adhered to the Male/Female separation practice - though they have become a little more “fancy”!

We found the visit interesting and worthwhile as a short diversion off our main route. However, the inability to talk to anyone living in the village (“Moravian” or otherwise - how many villagers are isn't clear) or to visit the Church were major downsides. The Moravians never became significant in UK (Even at the end of 18th C there were only around 5000 members in UK and in 2016 there were c1200 across 30 congregations of which Gracehill is one) and the presence of this village on the List would say little about the country - other than to indicate the degree of religious tolerance which was available there by the mid 18th C (at least to non conformist groups - The Moravian church was “recognized” by Act of Parliament in 1749).

The biggest role played by Moravians in UK religious and social history was to have influenced John Wesley, the founder of Methodism. He had initial contact with them during a trip to the American colonies in 1735, had his “conversion experience” in a Moravian meeting in London in 1738 and subsequently visited Hernhutt (More here ). For a range of reasons Non-Conformism in the UK was to take its own path with Wesley’s “Methodism” growing out of the Church of England and becoming the major such denomination. The individual most responsible for the creation of Gracehill was an English evangelist John Cennick (1718-55) who, at one time, was a close associate of Wesley. The Moravian congregation set up by him in Ballymena acquired land from the local Lord in 1759 and the church had been built by 1765. As far as I can discover the congregations were all local people and the fact that their religion was identified as “Moravian” should not be taken to imply any influx from Europe to populate the village.

I note that the nomination seems likely to emphasize the positive aspect of “Tolerance” as demonstrated by the Moravians - especially given the location in Northern Ireland, “infamous” for its cultural divide and intolerance (even if such a reputation is not always justified). “The Irish perspective gives the Moravian Settlement here unique historical, cultural, social, educational and religious features. For example, as far back as 1798 Gracehill was seen as “a place of refuge” for all sides during the United Irishmen’s Rebellion.” (commemorated by an obelisk in the village square.). I did note that one of the most recent (male) gravestones had an inscription stating “For ever Scottish” and would have liked to explore further the extent to which the Moravians of Gracehill are very much a part of the Ulster Scottish tradition which is more normally associated with Presbyterianism. I am not an expert in these sectarian nuances but Moravians and Presbyterians are certainly closely linked. In USA they have a formal relationship and in UK have discussed creating a “full communion”. I quote from Wiki – “Count Zinzendorf's ideal was a fellowship of all Christians, regardless of denominational names, and the Moravian Brethren sought in the Diaspora not to convert people to the Moravian Church but to awaken the hearts of believers and make them better members of the churches to which they already belonged”.

When Cristiansfeld was inscribed as a single Moravian Settlement in 2015 ICOMOS wasn’t very happy that it had gone ahead alone and the UNESCO recommendation was for there to be a transnational extension. The Christiansfeld Nomination file compared 27 Moravian settlements around the world for ability to meet UNESCO requirements. Gracehill came 6th – behind Christiansfeld, but significantly ahead of the other "T Listed" extension sites at Herrnhut and Bethlehem. The points assigned in the the original evaluation were as follows “Christiansfeld scores highest….receiving all 160 points. It is followed by Gnadau with 135; Ebersdorf and Lititz with 130; Königsfeld and Salem with 125; and Grace Hill with 120p”. The assessment for the latter was “Grace hill has been exceptionally well protected, yet the settlement lacks its original Common House/Gemeinlogis and original Sisters’ House”. All 3 locations are now on their respective countries’ T Lists (in what would appear to have been a coordinated action) and I would presume that inscription will be reasonably automatic. However, despite this activity, the Grace Hill Web site section on World Heritage gives no indication of a possible nomination date.

Quite why the other sites which were rated more highly than Gracehill have been excluded or are currently unable/unwilling to progress isn’t clear – though the original ICOMOS evaluation pointed out that a serial transnational site could legitimately be “populated” over “several Nomination cycles” so there may yet be further nominations for historic sites in countries such as Tanzania (most of the World's c1 million Moravians live in E Africa), Nicaragua/Honduras (Miskito peoples are significant adherents) and beyond!! Since one of the “special” attributes of the Church has been its Worldwide “mission” it would seem more appropriate to look further afield rather than just adding more and more “similar” European/US sites. This selection of photos from a Web search for "Moravian Missions" shows that there is plenty to go at around the World if the desire to move beyond Europe/USA were present!