Moravian Church Settlements (Germany) is part of the Tentative list of Germany in order to qualify for inclusion in the World Heritage List. It is a proposed extension of Christiansfeld WHS.

The Moravian Church Settlements in Germany comprise the town of Herrnhut in Saxony. Herrnhut (1722) was the ‘founding town’ of the Moravian Church, from where the missionary movement began. It defined the urban planning principles for the later settlements all over the world. This is part of a serial transnational nomination effort, together with sites in the UK and the USA. 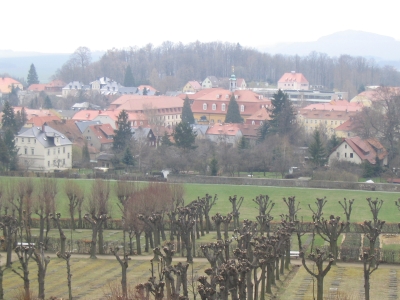 I visited the German component of the transnational extension of Christiansfeld, Denmark, during a gloomy weekend in Fall 2004. We did a trip to Upper Lusatia (Lausitz in German), the region in Germany inhabited by Sorbian Slavic minority (Upper and Lower Lusatia were parts of the Bohemian Crown in Middle Ages). One of our first stops was Herrnhut (Ochranov in Czech, Ochranow in Sorbian language). The titles in all the languages are related to "protection". While the Slavonic ones are rather literal, the German one is more poetic and it recalls a hat of the Lord, for shielding of Brethern against their enemies, probably Catholics.

Frankly said, my impression from Herrnhut was quite lukewarm, and I have almost no memories on my visit of this place. We walked through the settlement and climb the nearby hill surrounded by the cemetery, which is also mentioned in the nomination text as the special part of the complex, and with the cute arbor on the top (PHOTO: view from the hill - sorry for a bad quality, I took only 3 photos in Herrnhut, and this is the best one I have). The place is not very spectacular. My THUMB-UP is only because of the historical importance of Moravian Brethren and their settlements, so I can see the OUV there. The transnational extension makes sense in my opinion and it should substantially strengthen the OUV of the original site in Denmark.

As regards the other components, I had "near miss" of Gracehill in Antrim, Northern Ireland, UK. I traveled from Belfast to Glens of Antrim via Ballymena in 2018, spent around 3 hours waiting for the bus connection in not very appealling town of Ballymena. The site is located some 3km from the railway station... but I had no idea about Gracehill and its historical importance.

What is also interesting is the origin of the Moravian Church. As evident from the title, the protestant Brethren fled from Moravia, part of the Bohemian Crown, after the defeat of Protestants by Catholics in 17th Century. The most famous person of Brethren is John Amos Comenius, the last bishop of the Unity of Brethren founded already in 15th Century in Czechia. One can visit his museum, located in the town of Fulnek, which has been declared as the Czech national monument. However, the church in Fulnek has no chance to be included to the nomination... but it represents the cradle of Moravians, who are still active and spread all over the world. Herrnhut is the oldest settlement they founded after their fled from Moravia.

Even though I am not very enthusiastic to sites like Herrnhut, I have to admit its potential and expect the smooths extension in frothcomming years.