The Cultural Landscape of Al-Faw Archaeological Area is part of the Tentative list of Saudi Arabia in order to qualify for inclusion in the World Heritage List.

The Cultural Landscape of Al-Faw comprises the remains of a pre-Islamic caravan station, important for the trade of frankincense. It lies at the fringe of the Empty Quarter. 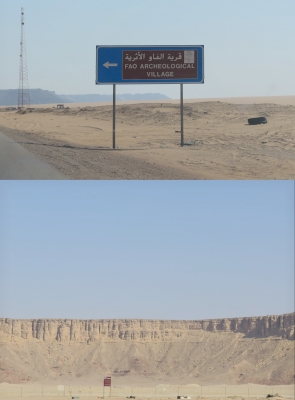 This non-review from my misadventures is to point out a few things. During my visit in December 2018 I had tried to visit Al-Faw (Faw/Fao however you want to romanize it) to no avail. First off it's far out near the Empty Quarter but the now-inscribed rock art at Ḥimā made me drive the outer loop anyway. There is also a wildlife sanctuary that you cannot enter beyond it that might one day be a WHS.

As you drive along the 177 there is a clear sign for the archaeological site as if it was a tourist attraction. You can see it in my picture. Once you drive off the road here though, it is suddenly all fenced off - see the second sign, with no visit center, no parking - well you can park ANYWHERE in the desert I suppose, lots of broken tires and an interesting sign to call if one needs information. Well I called and nobody answered and I kinda doubt I would have come far this way. I believe it's the caretaker's phone number who lives in the area - anyway it wasn't of much use. I took some pictures but one is just too far away to see anything - maybe flying a drone over would be the way to go to at least something - but be aware it's still quite ways off from the "parking lot" so your drone needs to have decent range so unless you have a high-end model you may want to test that but before it gets lost after 800m.

However, the most interesting things have already been taken anyway - by looters for one and, unless you count the Pergamon Museum looters (some may), one of the most famous headpieces is found on the Museuminsel in Berlin. Since 2014 the area is finally fenced off as I saw myself but that's probably 70 years too late.

Unless you are on a tour you usually need to pre-arrange visits around the country. When I inquired about it in Riyadh I was mostly told to arrange in a town closer-by such as Medina and Hail, which seemed more like an excuse not to help me. So in the end unless a tour organizer can guarantee this I think it's not possible to visit. There are reports of restorations that are supposed to start but it also sounds like nothing is happening and they won't get this read for Vision 2030.