Cold winter deserts of Turan (Uzbekistan) is part of the Tentative list of Uzbekistan in order to qualify for inclusion in the World Heritage List.

Cold winter deserts of Turan is a serial trans-national nomination (with Turkmenistan and Kazakhkistan) with four locations in Uzbekistan featuring desert in temperate climates with arid cold winter climate, including an area of wetlands (shallow freshwater of salt lakes) in the bed of the former Aral Sea. 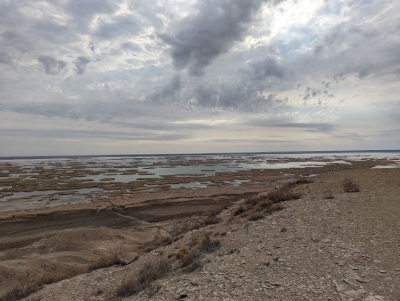 Planning my trip to Uzbekistan in 2022, I looked at the upcoming nominations. The cold winter deserts are coming up for 2023 and I figured I would give it a visit. But then I ran into a wall: Where?!

Looking at the coordinates on our map (Els has corrected Lake Sudochye since), I was hard pressed to find a location to visit because:

The easiest option for the time being is the State Sanctuary of Sudochye-Akpetki. Sudochye is a lake (system) where remnants of the Amu Darya River flow in. You can reach the State Sanctuary from both Muynaq and Nukus by 4WD and it is included in several tours. If you did an Aral Sea tour that included the abandoned fishing village of Urga (a common stop on a two-day tour) you have visited. Solivagant was so kind to investigate the borders of the protected area. He also had the misfortune of skipping "that fishing village" when he visited the Aral Sea.

The State Sanctuary consists mostly of desert with the Sudochye lake (system) in the middle. The core zone of the nature preserve is the lake plus the shoreline. But seeing this is about the desert, I would assume that also the surrounding area will be included.

My driver and I came from Nukus. When we entered the State Preserve to road quickly deteriorated and got worse continuously. You can't visit without a 4WD. We made several stops in the desert and around the lake. The main stop was in Urga where we also had lunch. You get plenty of views of the lake and get to see plenty of abandoned buildings.

When we left the lake and drove through the desert we managed to see several camels, topping off a nice day in the desert.

Deserts are well ... deserts. I am not sure where precisely the OUV of this specific desert lies. In addition, the Aral Sea is one of the worst manmade natural disasters in human history. Lake Sudochye must have been impacted severely by the Amu Darya being diverted to grow cotton. Maybe the other components are better. Maybe I visited the wrong location, or the location will be removed.

In Uzbekistan there are loads of desert tours including yurts and the like. Most don't take you to the core zones. Easiest option (if the locations remain as is) is where I went as both Muynaq and Nukus have tourist infrastructure and tour operators.

To get to Muynaq or Nukus, you either arrive by car from Xiva/Khiva. Or you fly in from Tashkent. Flights in Uzbekistan aren't expensive and distances great.

In my case, I arrived in the morning by plane from Tashkent and had arranged a 4WD upfront. We drove into the desert and returned to Nukus in the evening. With more time, I could have ventured to the Aral Sea and stayed in a yurt. I wasn't too eager, for logistical and health reasons.

The Nukus art museum is a weird stopover for which you should make time. From Nukus, Xiva/Khiva is the next stop. And you should find time for the desert castles.