Silk Roads: Zarafshan-Karakum Corridor is part of the Tentative list of Uzbekistan in order to qualify for inclusion in the World Heritage List.

Silk Roads: Zarafshan-Karakum Corridor is a serial transnational nomination with 31 components in Tajikistan, Uzbekistan and Turkmenistan representing one on the main corridor of the Silk Road, passing through Samarkand and Bukhara. Uzbekistan has 15 sites, 7 of them on the TL on their own right. It consists of remains of long-distance routes of integration, exchange and dialogue between the East and the West, from the 2nd century BC until the end of the 16th century. The components include remains of Sogdian cities and palaces, forts protecting the Road and an irrigation and water management system, an early Christian Syriac monastery and muslim monuments from pre- and post-Mongol eras. 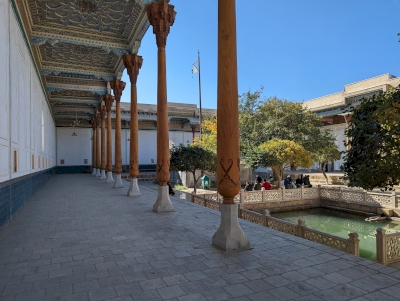 For 1.500 years, the silk roads played a major role in exchanging goods and knowledge between Europe and Eastern Asia. A key area was Central Asia which linked the various Chinese empires with multiple Persian empires over the centuries.

The region itself consists mostly of deserts, intercut by rivers from the mountains, most notably the Zeravshan, the Amu Darya (Greek Oxus) and the Sir Darya. Indeed, the proposed sites follow the green corridor along the Zeravsahn in Uzbekistan from Samarkand to Bukhara from where it continues into Turkmenistan.

As a half day trip from Bukhara, I visited the Vobkent Minaret, the Chasma-iAyub mausoleum in Khazira and the Bahouddin Architectural Complex. Bahouddin Architectural Complex is a true gem, showing strong Chinese influences. Vobkent Minaret and Chasma-iAyub Khazira are short 5min visits each. One is a minaret, the other a facade of a mausoleum with a swastika symbol.

Small word on advice re Chasma-iAyub: There are at least 3 sites named accordingly, one in Bukhara. Spelling varied, but I think the location on our map is correct.

The next day, I continued from Bukhara via Sharisabz to Samarkand. When approaching Samarkand, we stopped Kafirkala on the cities' outskirts. The site is not signposted at all and hard to make sense of. I think you would need a guide, but I managed to see parts of the fortification.

My last stop on the Silk Roads happened on return from Tajikistan (Sarazm), I took a minibus from the border to Jartepa II Temple, the ruins of a Zoroastrian temple. The road between Samarkand and Sarazm follows the original traderoute and the temple is just 100m off. Again, signposting was not existing and the state of preservation poor.

Personally, I would have loved to see the Raboti Malik Caravanserai (the site is about trade) and the Nestorian Christian settlement of Suleimantepa, but couldn't work either into my itinerary.

The nomination groups several tentative sites that had been already proposed individually or in the other Silk Road site of Uzbekistan: Silk Road Sites of Uzbekistan. For me, none of the individual sites were on their own strong enough to warrant inscription. As such, the Uzbeks follow the European model of creating OUV in a serial, transnational nomination.

What was interesting to me were the sites that show a clear Chinese (Bahoutdin Architectural Complex) or Indian influence (Chasma- i Ayub for the swastika). But considering that Bukhara, Khiva and Samarkand are also Silk Roads sites, it feels a bit redundant. I think I would have preferred extending the existing sites to cover some other components (e.g., include Bahoutdin Architectural Complex with Bukhara).

Personally, I also feel the Sogdian sites (Kafirkala, Jartepa II Temple) should be inscribed on their own. I think there is OUV in Sogdian heritage, but it would require better preservation.

The easiest options are around Bukhara. Seeing how cheap drivers are in Uzbekistan, there really isn't a point figuring out other means. I had a travel agency in Khiva arranging drivers from Khiva all the way to Samarkand for me.

Some of the sites are really not touristy, so get google maps to run with Russian directions. And make sure that the driver is going where you want to go.

The Silk Roads corridor runs from the Tajik border near Samarkand to the Turkmen border South of Bukhara, i.e., along the main Central Asia tourist corridor. For those a bit curious, you can cross into Tajikistan to visit Sarazm when visiting Jartepa II Temple. Most western countries now have visa free entry to Tajikistan.